A consultation has launched this week on a scheme to create a new, safe and enjoyable walking and cycling route through neighbourhoods to the north and east of the city centre.

The proposals – subject to the consultation, which is open until Wednesday 17th March – will create new crossings to overcome local barriers for people travelling on foot and by bike, such as the River Irk, Ashton Canal and railway viaducts.

Junctions and public spaces which are not currently easy to walk or cycle through will be enhanced, with more trees and green space included in the plans.

The scheme, which is being proposed after changes were made to the design following a previous round of consultation, runs from Roger Street in the Green Quarter, passing Islington Marina and through the Ancoats conservation area, to Pollard Street’s junction with Great Ancoats Street, which is part of the Manchester and Salford Inner Relief Route. 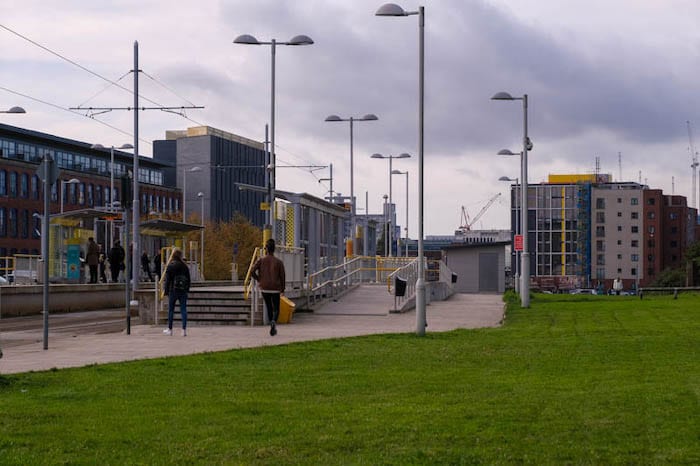 In the original consultation in May 2020, respondents overwhelmingly agreed that they wanted the council to create routes away from cars and roads, and develop a route that links key places in all these areas, such as Cutting Room Square in Ancoats, the New Islington tram stop, plus connects to quiet routes to Piccadilly and the Northern Quarter.

Respondents also wanted to make improvements to key junctions to help make them easier to cross, and to make Bengal Street one way, to make crossing safer.

Other suggestions included making more green public spaces, and moving some car parking to another area, to create green spaces on this route.

They also identified an issue with route through the Marina being too busy for cycling.

In response to this, the design has been amended, ensuring that the route is away from busy roads, using quiet routes where possible and using segregation when the route is next to a busy road.

Other amendments have included developing a route that links the key places identified, and proposing that all key junctions will have dedicated crossing facilities for pedestrians and people on bikes, including segregation.

The design proposes a prohibition of driving on Bengal Street, to enable a new crossing to be built so that pedestrians and people on bikes are able to cross safely, while creating a small public space on Bengal Street and looking at other opportunities along the route to plant trees.

It suggests minimising on-street parking on roads along the route, to enable safer cycling, and removing some parking where segregation is installed, as well as proposing a quiet route away from the Marina, on Lampwick Lane and Weybridge Road. 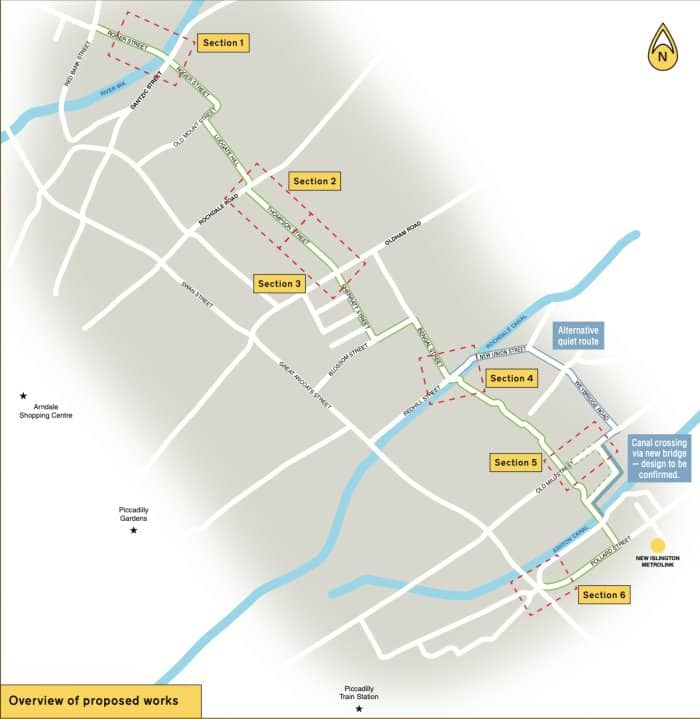 The project has been designed in accordance with current accessibility guidance and is intended to enable people of all ages and abilities to travel safely on foot and by bike between the north and east of the city, away from the busy inner relief route, while still being able to link into existing routes and emerging Bee Network routes.

This trailblazing junction design has already been successfully implemented at Royce Road, Hulme, as part of the Manchester to Chorlton walking and cycling route.

“This scheme will help create better places to live to the north and east of the city centre, making walking and cycling easier and more attractive options by improving travel links between emerging neighbourhoods and the city centre,” said Councillor Angeliki Stogia.

“Our proposals, which follow on from the benefit of an initial round of consultation, seek to create more walking and cycling-friendly public areas which are joined-up more naturally, with better signage and safer junctions, to encourage people of all ages to see travelling on foot or by bike as natural choices.

“Now it’s time to look at our new proposals and give us your feedback, so that we can create a scheme which is informed by those views and provides lasting environmental benefits for our city.”

The scheme is funded by the Greater Manchester Mayor’s Challenge Fund, through a grant from the government’s Transforming Cities Fund, and will form part of The Bee Network – a plan for Greater Manchester to deliver the UK’s largest cycling and walking network.

“There has been a boom in residential properties in this area of Manchester over the last twenty years and this route will give people the option to travel to and from these neighbourhoods on foot or by bike with ease,” said Greater Manchester’s Cycling and Walking Commissioner, Chris Boardman.

“This will make the area more attractive for urban living and I’d encourage people to have a good read and respond to the consultation.”