This is the place: Swinton and Pendlebury is a proper northern town on the up

Manchester city centre is expanding in all directions. But what happens when the young professionals who live there decide to settle down and have kids and are more interested in schools and gardens than bars and restaurants?

They can’t all move to Chorlton or Didsbury. And if you’re looking for value, there’s more of it in north Manchester and Salford than there is in south Manchester.

Remember when Chorlton-cum-Hardy was Didsbury’s affordable neighbour? Or when Levenshulme was Chorlton’s? If you’re looking for value and want to move to north Manchester but can’t afford Prestwich, head three or four miles up the East Lancashire Road from Chapel Street and you’ll arrive in Swinton and Pendlebury, Prestwich’s more affordable neighbour.

Swinton and Pendlebury are neighbouring towns on the Salford side of the Irwell which have merged to become one seamless district. 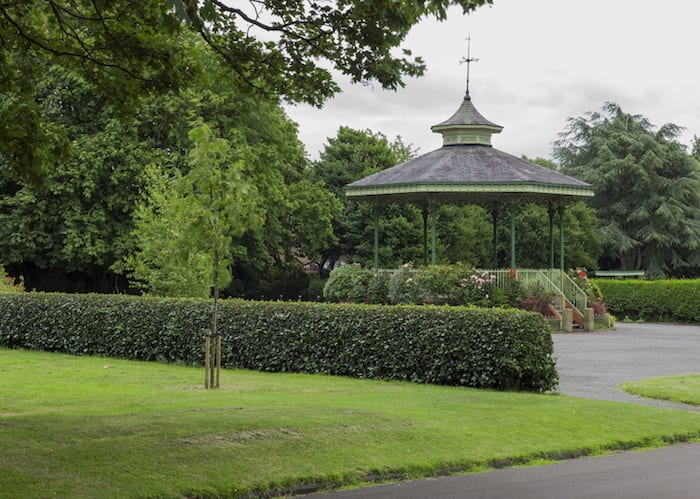 The name Swinton comes from Old English and means ‘swine town’ because, back in the day, pig farming was a common occupation. The town was an important mill town and known for its coal mines which provided fuel for brick making and cotton spinning. Swinton bricks were used to build the Bridgewater Canal. The last coal mine, Agecroft Colliery, closed in the early 1990s.

Where there were coal mines there’s rugby league. Swinton Lions are the most successful local club, having won the Championship six times and Challenge Cup three times, but at the moment you’ll have to travel to Sale to watch their home games.

You don’t have to travel that far to watch Salford City FC. The Peninsula Stadium is on Moor Lane in neighbouring Kersal. Six years ago, Salford was playing in the Northern Premier League North, the 8th tier of English football. Next season they will be playing teams like Plymouth Argyle, Bradford City and Oldham Athletic in EFL League 2 following successive promotions and a play-off final victory against Fylde at Wembley in May.

Some famous names have called Swinton and Pendlebury home. LS Lowry lived at 117 Station Road for about 40 years. There’s a plaque in his honour on the front wall of the house. The new owners are said to have found some of the artist’s early paintings in the loft. Acclaimed actor Sir Ben Kingsley (Sexy Beast, Gandhi) lived at 119 Station Road next door when he was growing up.

Albert Finney (Erin Brokovich, Skyfall) and Robert Powell (Jesus of Nazareth) also lived in the area whilst Tony Warren, the man who created Coronation Street, grew up on Hospital Road in Pendlebury. He would pop into a greasy spoon on Swinton Precinct for a brew and eavesdrop on the gossip of local women.

Madchester legend Shaun Ryder went to St Ambrose Barlow High School in Swinton and still lives in the area with his three kids. He has been known to visit local pubs such as the White Horse, Moorside Farm and Swinton Legion for a Jameson.

Former Manchester United player Ryan Giggs went to Moorside High School and played for junior football club Deans FC until he was scouted. As well as being the most decorated footballer of all time, Giggsy is also arguably one of the most down-to-earth. He invested in the area when he co-founded George’s Dining Room & Bar in neighbouring Worsley with some old school friends.

Transport to and from Swinton 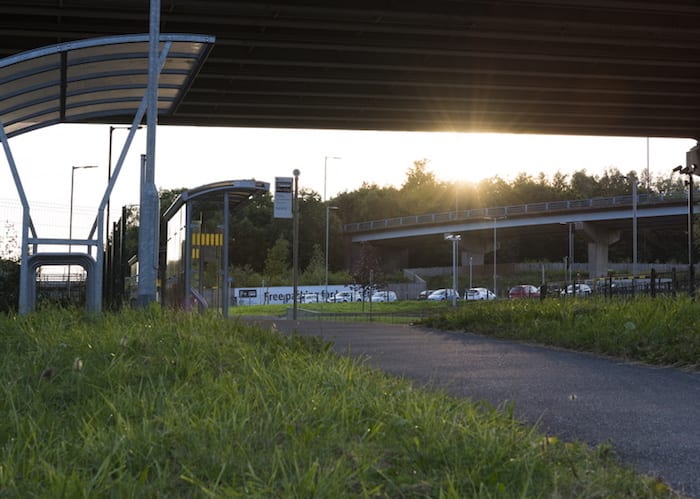 Transport links are good. Swinton and Pendlebury is dissected by three major roads – the A580, better known as the East Lancs Road, the A666 or Bolton Road (known locally as ‘the top road’), and the A6 or Chorley Road  (‘the bottom road’). Pendlebury is mostly east of Bolton Road. Swinton is mostly west.

You can leave the car at home because there are three railway stations with good rail links to Manchester and it takes less than 15 minutes to get to town on the V1 bus, regardless of traffic because it uses the first traffic-free guided busway in the north-west. Some people even drive to Swinton just to use the park and ride bus service.

A taxi to the city centre should cost you less than a tenner. If you’re going on your hols, local taxi firm 1010 promise a set fare to Manchester Airport for £25.

Community and shopping in Swinton 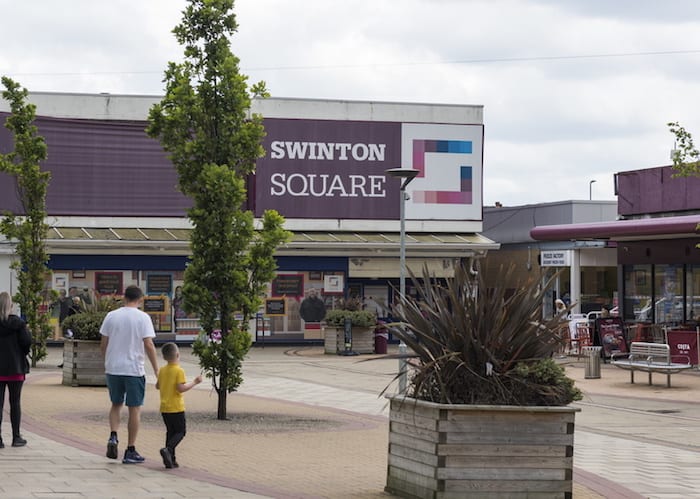 Swinton Square Shopping Centre (known locally as Swinton Precinct) opposite Salford civic offices has come on a lot from the days when the big attractions were Woolworths and a Greenhalgh’s bakery. Now there’s a big Asda, a Costa Coffee, a couple of banks, a couple of travel agents and some independent shops. You can’t deny the town is trying to appeal to a wide audience. With a Morrison’s and an ALDI nearby too, there’s plenty of supermarkets to choose from for your weekly big shop. 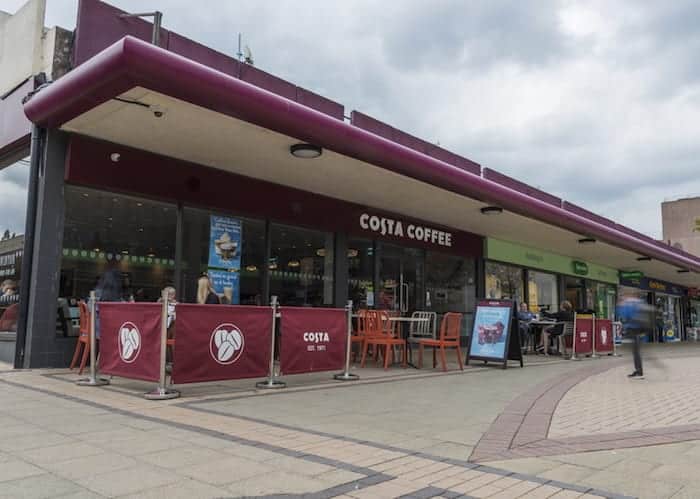 The centre also has a brand new £5m community hub called Swinton Gateway which houses council, health and children’s services over three floors including an impressive library with free computer access. The second floor is occupied by NHS services convenient for outpatients of Salford Royal Hospital aka Hope Hospital. 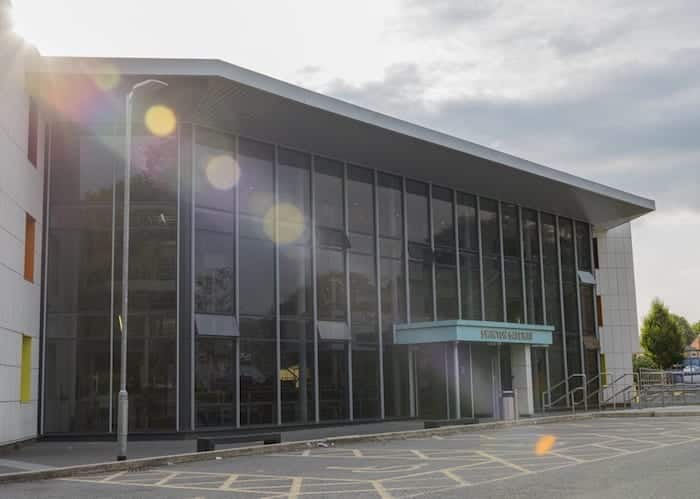 Salford council is planning a £20m regeneration of Swinton town centre which will include a new leisure centre on the revamped civic centre ‘campus’. That’s all we know about the revamp. The rest is top secret.

If you’re a dog owner and go to work, are out for the day or just need some peace, you know your four-legged friend will be cared for and happy at Swinton Dog Day Care Centre.

Bars and restaurants in Swinton

With such terrific transport links, you’d be forgiven for being tempted into a short trip to town for nightlife. However, there’s enough bars and restaurants in Swinton to keep you entertained. 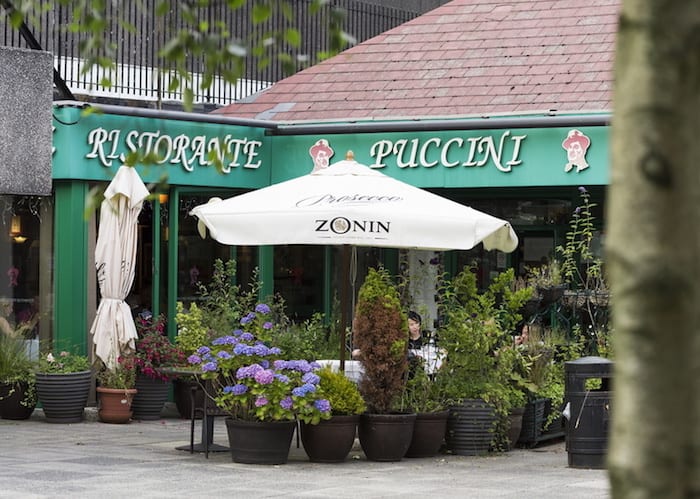 Sylvester Stallone could have eaten pretty much anywhere when he was over here to film a Warburton’s Bread advert in Bolton a few years ago, but he chose Puccini, by far the most famous restaurant in Swinton. “We have had lots of famous people here before,” says owner Michele Pucci.  “To me everyone is famous… everyone is important.”

This authentic charming little Italian restaurant on Swinton Precinct has been open for over 25 years and has been a favourite with Manchester United players and staff over the years. 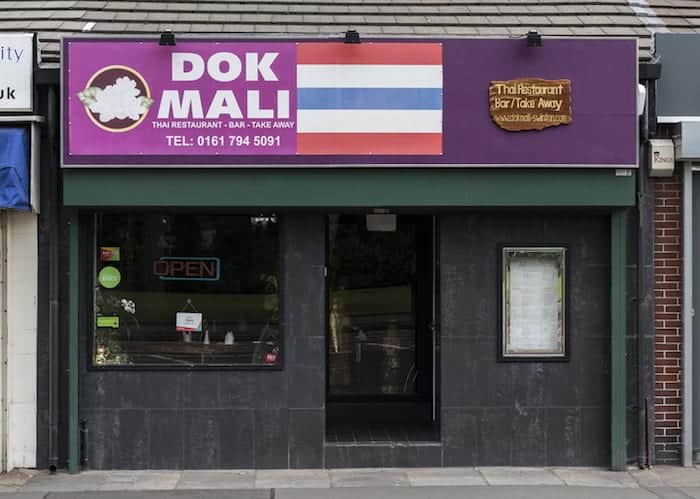 Transport yourself to Thailand without leaving home at Dok Mali on Chorley Road. It’s as authentic a Thai restaurant as you’re going to get without going to Bangkok. Try the red curry, it’s delicious.

If you’re looking for modern British cuisine, Albert’s Worsley (which is categorically in Swinton, not Worsley) is a winner. Try the seafood platter or the lamb dish. You won’t be disappointed. It also boasts a well-stocked bar with poser tables and half-price champagne on Fridays if you just fancy a cheeky few drinks. 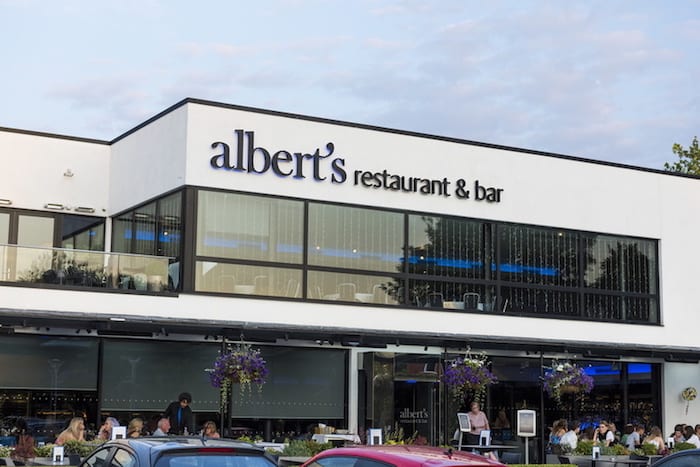 If it’s a skinful you’re after and beer is your poison, check out House of Hops near the Post Office just off Chorley Road. This little bottle shop and tap room houses 10 keg lines of adventurous ales from across the country and beyond. It’s a small bar with a big personality. What’s more, it’s dog friendly and has created a cute new community culture to make new friends in the area. “What a great first year it has been,” say co-owners Claire Fisher and Scott Daniels. “Love to all our HOH family – thanks for all your support. Cheers!” 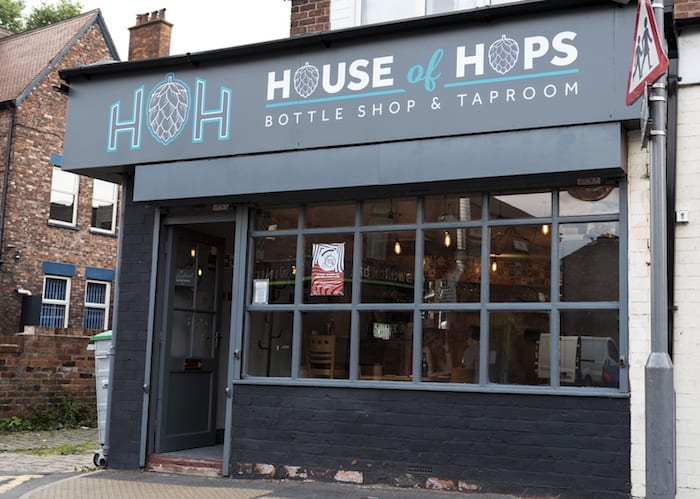 If you’re looking for a no-nonsense boozer, the Moorside Farm boasts a well-stocked bar with enough variety for everyone’s taste. With four rotating guest ales on tap, over 30 different whiskies and 30 different gins, you’re in good company. 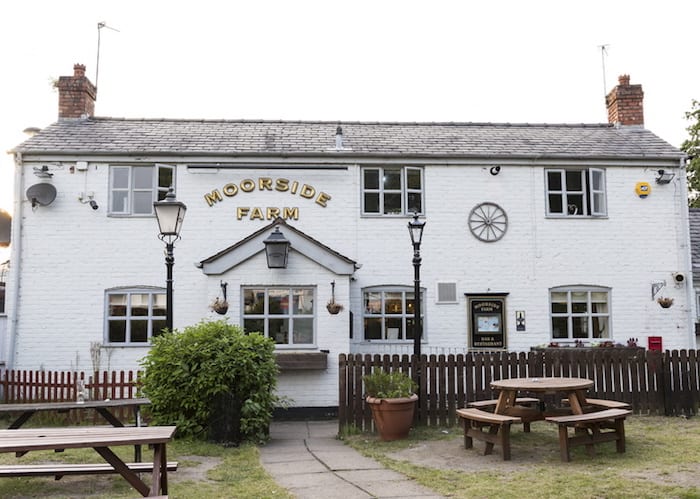 Serving burgers daily and giving the Northern Quarter a run for its money, That Burger Place is an Americana burger joint just off Bolton Road. They offer a decent lunch deal which includes a burger, fries and a can of pop (or any soft drink) for just £6. The burgers are fresh so when they’re gone, they’re gone. Try the Whole Hog burger (£9), it’s dripping with pulled pork and BBQ sauce – and it’s piggin’ good.

Also on Bolton Road, Sykes Fish & Chips serve up some of the best fish and chips in Greater Manchester. This friendly family-run chippy serves generous portions, golden fish with beastie batter, and regularly has people queueing outside the door and down the top road.

Parks and recreation in Swinton 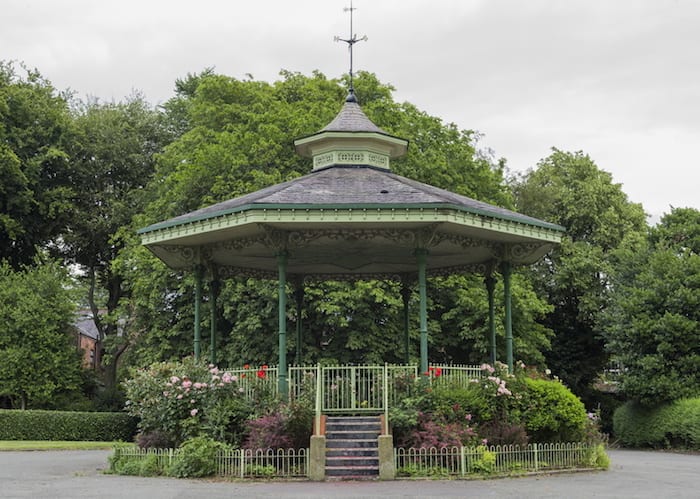 Just off Manchester Road is Victoria Park. This pretty park, which is made up of the Old Hall grounds, has been awarded three Green Flag Awards and sports a bowling green, tennis courts, a bandstand and a kids playground. Locals organise dog walking get together groups. 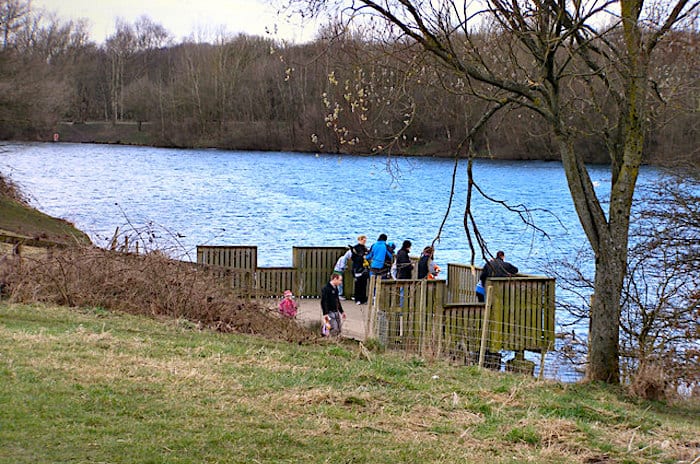 Clifton Country Park is a nature reserve and oasis of tranquillity with a lake, woodlands and meadows that are perfect for walking (with or without a dog), fishing, or just enjoying the scenery and wildlife. 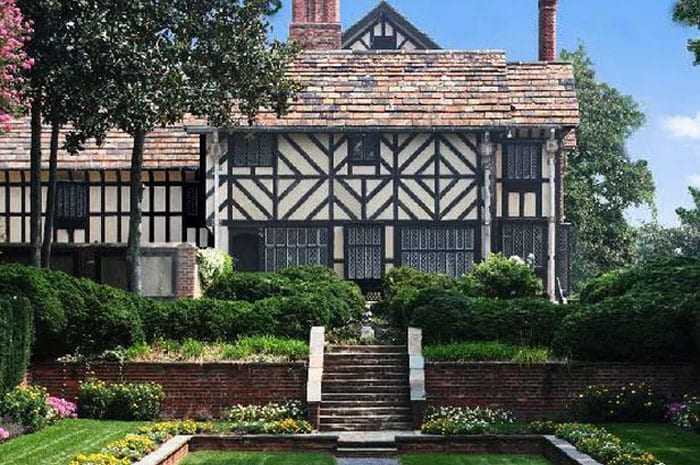 If you want to visit Agecroft Hall, you’ll need to save up for a plane ticket to the USA.  The Tudor manor house that used to be on the banks of the Irwell was dismantled when it was purchased by Thomas C Williams Jr. in 1925 and rebuilt on the banks of the James River, near Richmond, Virginia. 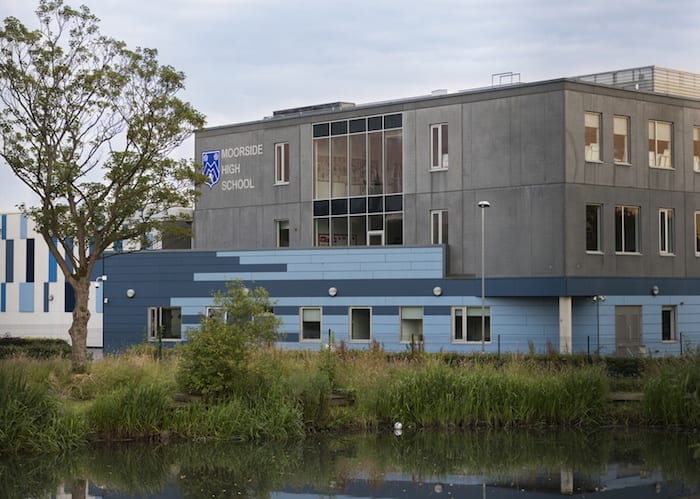 Moorside High School is a perfectly decent mixed gender school with spectacular amenities including a theatre, a generous teacher to student ratio and ‘good’ Ofsted reports. More importantly, of the pupils who finished school in 2017 – the most recent data available – 94% of pupils stayed on in education or went into employment or training. The school also liaise with local care homes, charities and the senior citizens from the church and community.

House prices are much more affordable than in neighbouring Prestwich and Worsley. You can buy a two-bed terrace for less than £120K, or a three bed semi-detached for under £200K. A four-bed detached will cost you around £300K, which is about what you’d pay for a terrace in Didsbury.

So there you have it. Swinton (and Pendlebury) has a lot to recommend it.  It’s undeniably a little rough around the edges, but so was Levenshulme and look what happened there. Just give it time.

This is the Place is the name of a poem by Tony Walsh commissioned by Forever Manchester, the one and only charity that raises money to fund and support community activity across Greater Manchester. And they can’t do it without your help. Donate what you can because investing in your local community to help it thrive can be a hugely rewarding experience. There’s a unique sense of satisfaction in knowing that you are making a real difference in the lives of others, especially those close to home.