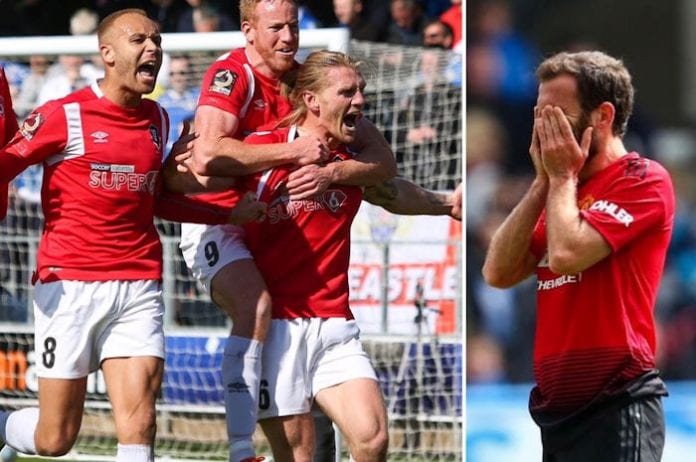 That’s what Huddersfield manager Jan Siewert must have been thinking after his team’s 1-1 draw with Manchester United yesterday.

It was Huddersfield’s 15th point of the season.

We’ll never know what Ole Gunnar Solskjaer was thinking after the game. But, as usual, he put a positive spin on what was another dismal performance.

Sadly, it’s beginning to look like he’s out of his depth. He may still be at the wheel and know where he wants to get to, but does he know how to get there?

8 points from the last 8 league games since the honeymoon in Paris (not to mention two Champions League and an FA Cup defeat) is almost relegation form. Extrapolate that over a season and United would end up with 38 points. That’s the number of points Southampton have got in 16th place.

And will throwing hundreds of millions more pounds at the team make it any better?

Ed Woodward has spent £744m since Fergie retired. He knows how to make money – that’s why he got the job – but he certainly knows how to waste it too.

In a couple of weeks, United will be celebrating the twentieth anniversary of that famous night at the Nou Camp when they beat Bayern Munich in the Champions League Final to complete the treble.

That was the pinnacle of United’s success under Fergie. It took him 13 years to get there and it’s been downhill for the club ever since – especially since he retired. At this rate, it feels like it will take much, much longer for the club to get back anywhere near where they were then.

For United fans, the decline is embarrassing if not tragic. This feels like the club’s darkest hour. Can it get any worse? We’ll find out next Sunday when the mighty Cardiff are the visitors for the last game of the season. It’s going to be a long hard summer for Ole.

Meanwhile, not a million miles from Old Trafford, the fairytale continues for Salford City.

When Fergie retired six years ago, they were languishing in the Northern Premier League north, the 8th tier of English football.

Yesterday, they reached the final of the Vanarama National League play-offs, beating Eastleigh after extra-time and a dramatic penalty shoot-out.

What a day for Salford City!

When star striker Adam Rooney missed the first penalty and injured himself in the process, it looked like the fairytale was about to end, especially with Eastleigh goalkeeper Luke Southwood in fantastic form.

But Salford bounced back and won on penalties thanks to a couple of outstanding saves by Chris Neal.

The new owners, the Class of 92, a consortium of former United players, and businessman  Peter Lim, have invested in the club and it’s paying off. Their aim to achieve Championship level football by 2029 is looking realistic

If they beat AFC Fylde in the final at Wembley on Saturday, they will be promoted to Football League Division 2, where they will play former Premier League clubs like Oldham Athletic, Swindon Town and Bradford City.

So good luck to Salford City on Saturday. Our money is on another fairytale ending with Salford getting promoted to the Football League with a last minute winner.

And good luck United. Because, with Salford moving up and United heading in the opposite direction, it may not be long before they are playing each other on a regular basis.