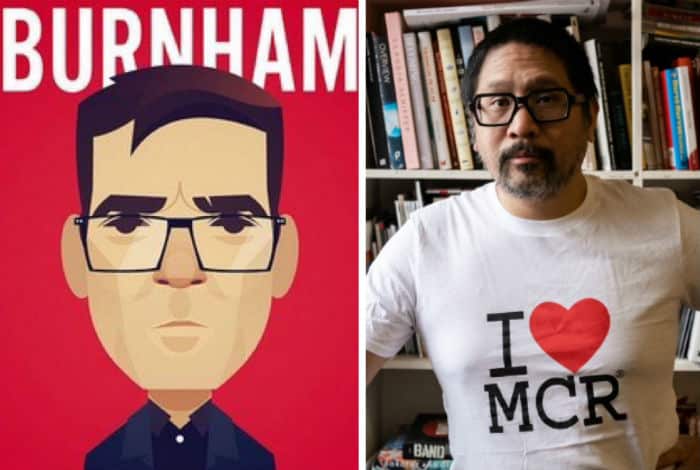 Everyone from Barack Obama to Dolly Parton has been immortalised in his distinctive designs, and his international clients include Adidas, Nike, McDonald’s, Apple, Time magazine and The New Yorker.

Throughout Manchester, Stan’s work can be seen at Metrolink tram stops promoting Transport for Greater Manchester’s Get Me There travel card scheme, and to promote Chinese New Year celebrations in the city.

One of the latest portraits added to the collection is of Greater Manchester Mayor, Andy Burnham.

As soon as Stan posted his new design on his social media platforms, hundreds of people began to share it and ask how they could buy a print.

The response was so overwhelming that Stan decided he’d produce prints and mugs, with sales going towards the Greater Manchester Mayor’s Charity.

“I was moved by Andy Burnham, as was most of Greater Manchester, for how he stood up and fought for the people who needed financial help the most during the pandemic – the forgotten people,” said Stan about the inspiration for his latest portrait.

“No one has been speaking on behalf of us so vociferously, and I’m proud to have him as our Mayor.

“I just wanted to show my appreciation for what he is doing by designing this portrait.”

Within minutes of Stan posting up the artwork, it became Andy Burnham’s new Twitter profile image.

“I am so grateful to Stan both for making me look cooler than I am and for his incredibly generous decision to donate the proceeds from this portrait to the Mayor’s Charity,” said Mr Burnham.

“This winter is going to be a tough one for many people and the OneGM campaign, supported by the Charity, will be crucial in getting support to those who need it.

“In particular, we will be working hard to support people who have been sleeping rough and the proceeds from this will be a massive help with that.

“Time and again, I am blown away by the selflessness and generosity of people living and working in Greater Manchester.

“I must be the luckiest Mayor in the world to lead a city-region where so many people are ready to step up and play their part.

“Stan is an amazing artist – and has created many an iconic image – but he embodies that Mancunian spirit of using his talent to give back to others.”

You can order an Andy Burnham print or mug from Stanley Chow’s online shop.