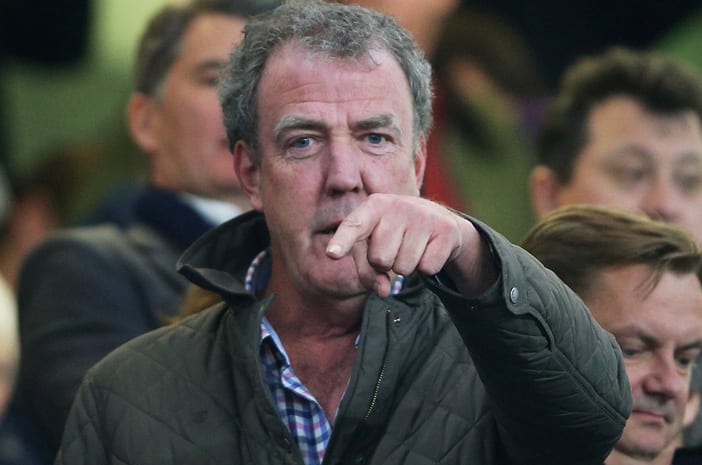 Jeremy Clarkson was in town recently to record a one-off series of Who Wants To Be a Millionaire? at MediaCity.

Mr Clarkson has never been a fan of Manchester and isn’t afraid to say so.

People of Manchester. It’s not raining and there is electricity. Welcome to London

He once said he would rather stop presenting Top Gear than move north with the BBC and described Salford as “a small suburb with a Starbucks and a canal with ducks”.

In case you’ve never heard of him, Mr Clarkson is a journalist and TV personality who is fond of cars, especially when they are driven very fast.

He used to be one of the hosts of Top Gear but was sacked after an “unprovoked physical attack” on a producer. He now presents The Grand Tour on Amazon.

He also has a column in the Sunday Times.

In yesterday’s paper, he wrote about his recent visit to the city he calls “a run-down, jumped-up, drizzle-soaked swamp”, and expressed his surprise.

He was surprised by “some magnificently restored Victorian warehouses and genuinely interesting modern architecture.”

He was surprised by the people.

When he went to Rosso for a meal, “all the men had Action Man bodies, Ken doll hair and shrink-wrap suits. Their shoes were pointy and their cheek bones chiselled. And it wasn’t just in that restaurant. It was everywhere. Manchester makes Marbella look like La Paz. It’s bonkers and .. absolutely brilliant.”

He was surprised by the weather. “The sun was shining-this happens about once every 14 years in Manchester.

“The men peeled off their hermetic suits and replaced them with Orlebar Brown shorts, the women slipped into some dental floss and everyone headed for the waterside bars to hang out and mate.”

Manchester isn’t just blingier than Marbella: “Something has turned Manchester into a British Berlin. And that…is high praise.”

Work over, he headed back to London. “It felt dowdy and monochromatic. Manchester is not Britain’s second city. It’s the first.”

High praise indeed. But wait a minute. There’s a sting in the tail.

“It’s the city that best represents the culture we have now. Fake breasts, Ferraris and football.”

Mr Clarkson is from Doncaster. He is clearly bonkers and .. absolutely brilliant.