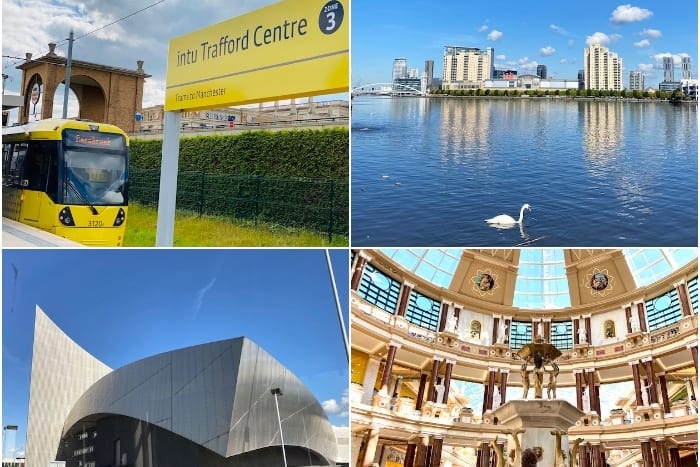 Architectural gems, a glimpse of Coronation Street and even an island filled with gnomes – just some of the highlights along the newly opened Metrolink route to the intu Trafford Centre.

The £350million pound tram extension was completed an impressive nine months ahead of schedule to open on March 22nd – although its big opening was rather overshadowed by the fact that in the same week the entire nation went into lockdown.

Now, with public transport back running at mostly pre-lockdown levels across the region, the new tram route is set to become busier than ever in the run-up to Christmas. With trams running every 12 minutes, you can expect to get from the city centre to the intu Trafford Centre in under 30 minutes.

Here, we take the new tram route stopping at each of the six brand new stops – and check out some of the unexpected treats to look out for along the way, as well as the stops you need for some big leisure attractions – including to Manchester United and the Imperial War Museum North.

Where to get the tram – Cornbrook 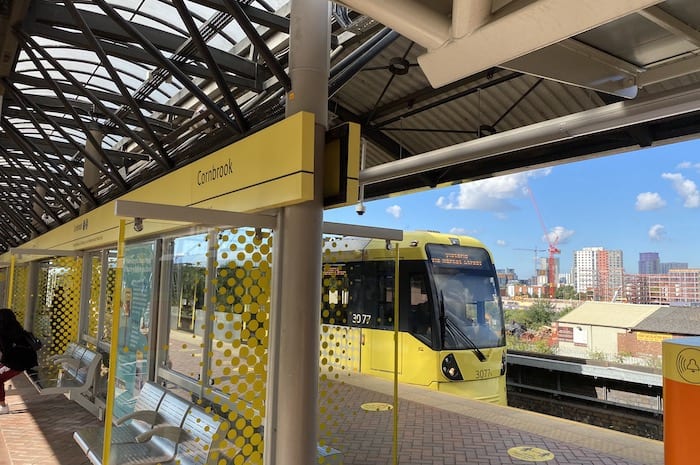 All trams running to the intu Trafford Centre start from Cornbrook – one of Metrolink’s main interchange stations, which is one stop along from Deansgate in the city centre.

From here trams run through Pomona, before continuing onto the new tram line and the six new stops.

The new stops and what to see 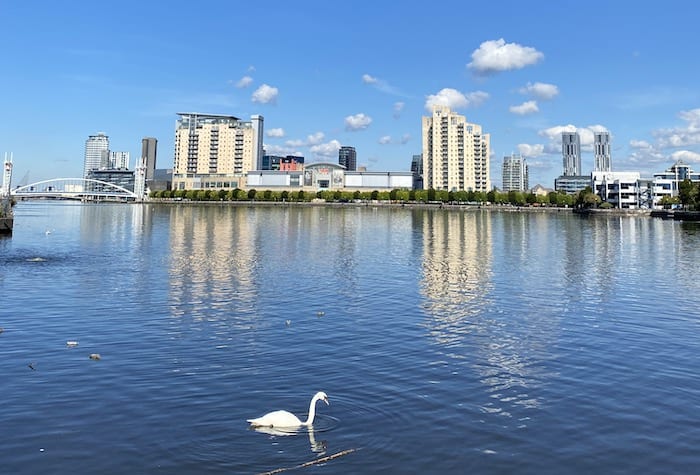 After the pleasant tram journey out of the city, the first new stop on the Trafford Centre route gives a real visual treat. Venture off the tram at Wharfside and you’ll enjoy expansive views out across the Manchester Ship Canal and over to the buzzing Salford Quays and MediaCityUK.

There’s an excellent walking route here – and marvel at the clear blue waters where swans merrily paddle by. But let’s not get too misty-eyed – there’s also the odd dumped fridge freezer here too, to be fair. 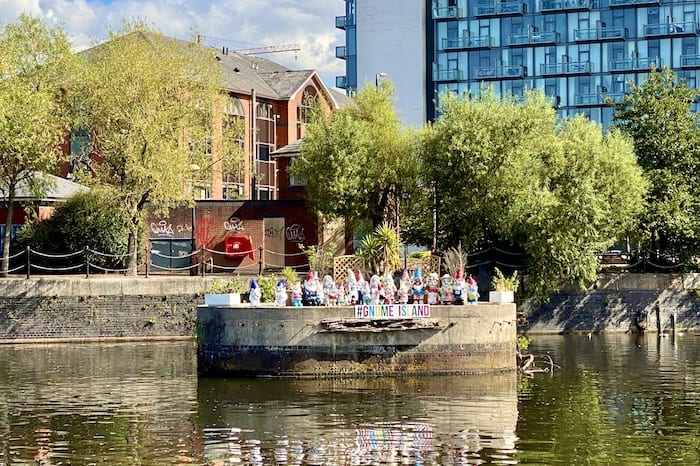 Since the demolition of the old Sam Platts pub on the Trafford side of the canal, there’s also now an excellent view of a great Manchester oddity – Gnome Island. The mysterious collection of colourful gnomes have taken pride of place on one of the concrete pillars from the old railway bridge here, growing steadily over the past few years.

And as to the secret of Gnome Island? Well, we hear it may have something to do with the team behind City Centre Cruises, who lovingly attend the gnomes’ every need.

This stop is also a convenient place to jump off if you’re heading to Manchester United. Back when the Trafford Centre extension was first mooted, the Wharfside stop was even called Manchester United on the original maps but for some reason that didn’t seem to stick.

Stop here for: Brilliant walks by the wharf, check out Gnome Island, also a short walk across to Old Trafford for Manchester United FC. 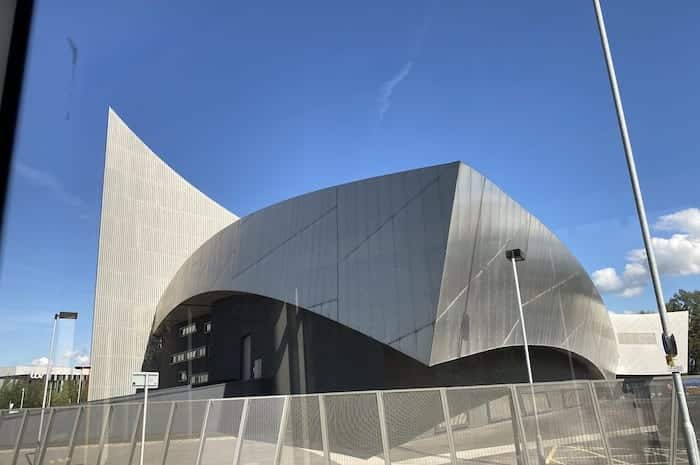 Back on the tram and the views are just tremendous looking out across the Ship Canal as you head from Wharfside to the Imperial War Museum stop. You get a great view of the architectural gem designed by Daniel Libeskind with its jutting silver angles said to represent a shattered globe as you travel along Trafford Wharf Road.

The tram stops just outside the museum, which recently reopened seven days a week to visitors after the easing of lockdown restrictions. 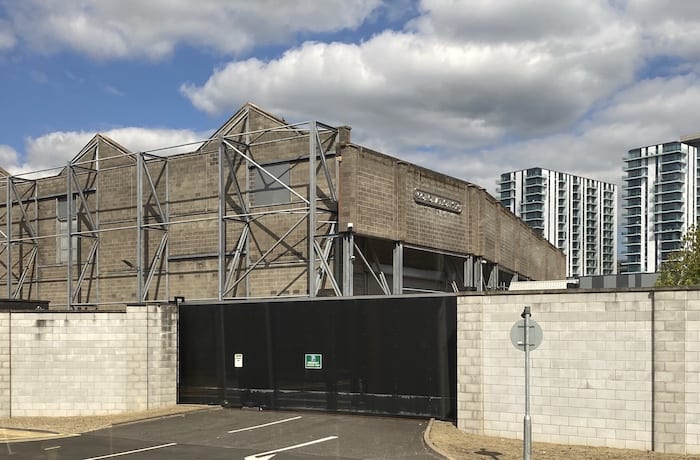 From here, don’t forget to keep your eyes peeled for the next building along the tracks – the studios where the world’s longest-running soap Coronation Street is now filmed.

The tram runs right next to the ITV studios – and the warehouse shaped building you can see from the road is the actual back of the Corrie set you seen on screen. The main entrance for cast and crew is here, too – so you never know you might even get a glimpse of a soap star as you travel past.

Stop here for: Imperial War Museum North, Coronation Street studio (although the Corrie tours access is from the Quays side of the lot), short walk to Old Trafford for Manchester United FC. 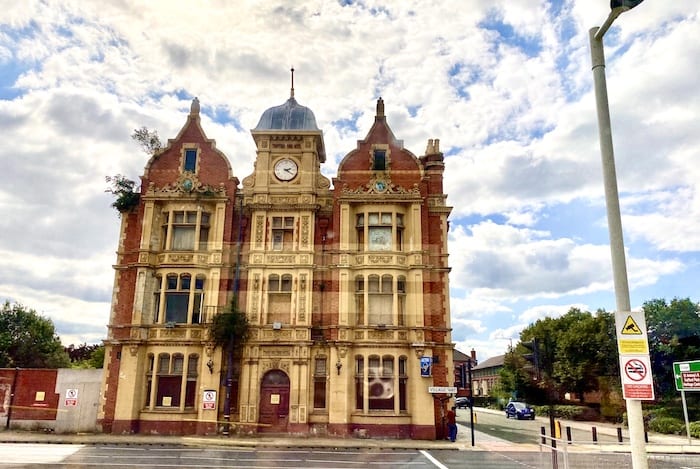 It’s been derelict for a decade and there had been major plans to bring it back to life as a massive 121-bedroom hotel, but they were withdrawn. However, the building was this week put back up for sale, and at auction it was snapped up for the princely sum of £825,000. Let’s hope the buyer aims to give it a new lease of life.

As you set off to the next stop, keep your eyes peeled for one of the colourful bee sculptures from the hugely popular Bee In the City event, which has taken up residence outside supply chain giant CHEP on Trafford Park.

Stop here for: Third Avenue for cafes and shops. 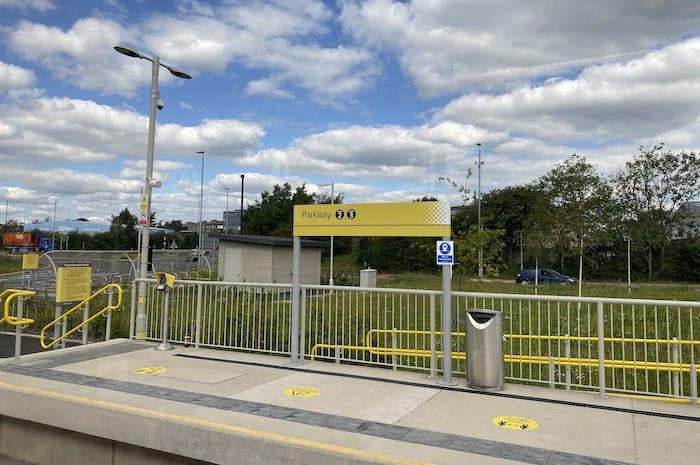 Now we’re right at the heart of Trafford Park, where some of the region’s biggest factories and employers are based. This stop is also where you’ll find a handy park and ride facility for those driving to use the tram.

As the tram heads off from here, keep your eyes peeled for the first glimpse of the huge domes of the intu Trafford Centre.

Stop here for: Park and ride. 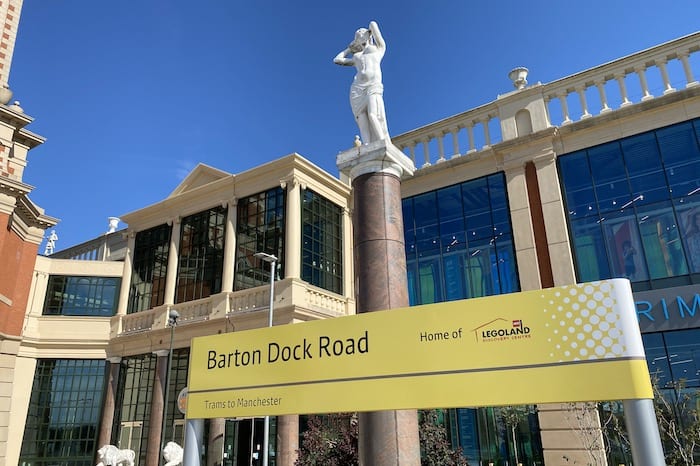 Now we’re at the first of the two main Trafford Centre stops for those visiting the giant shopping mall.

That includes the opening of the vast new Primark store – which since opening in June has been drawing in the (socially distanced) crowds to check out its dazzling area of cut-price goodies.

And can we take a moment just to marvel at the splendour of Barton Square now that it has a full glass roof and spectacular domed at its heart?  I mean, it wouldn’t be out of place in Dubai now would it? 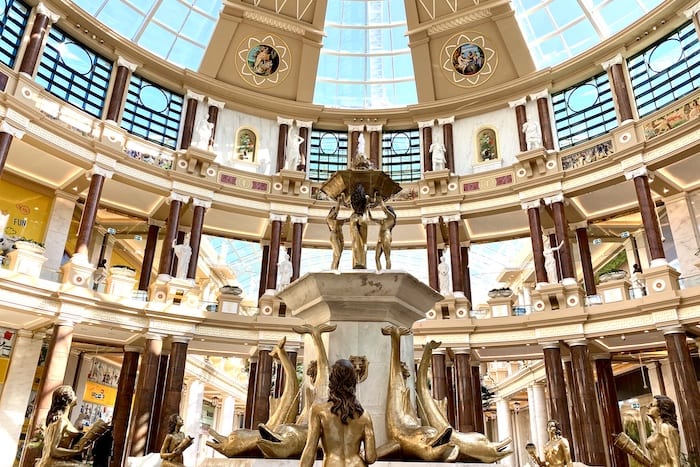 Stop here for: Barton Square (new Primark, SeaLife Centre, Legoland) and EventCity conference centre. Also the walkway here gets you in to the John Lewis/ Marks and Spencer end of the intu Trafford Centre. 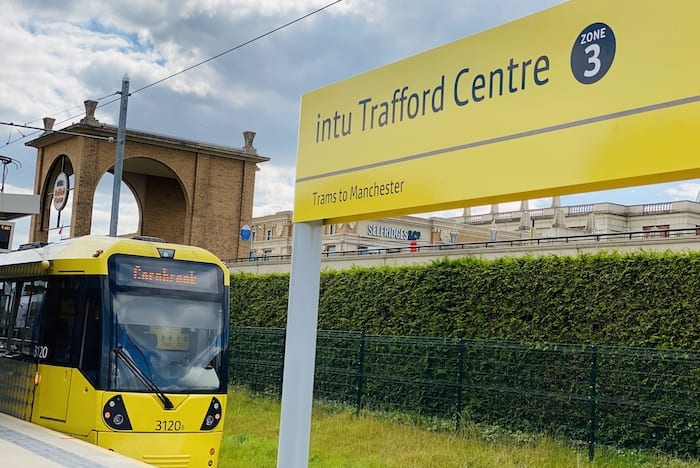 Mere seconds down the line and you are at the final destination on the line – the intu Trafford Centre official stop.

The stop here is right outside the huge Selfridges department store and there’s a dedicated new walkway taking you straight to its gilded doors.  There’s also access to the upper level of the Trafford Centre across a car park – getting you in to the Debenhams and Orient end of the shopping mall.