Blue lobsters are a rarity. It’s a colour mutation that happens about once in 200 million, according to the University of Maine Lobster Institute.

But one just happened to turn up in Rochdale in a delivery to a local gastropub.

Austin and Emma at The Hare on the Hill in Rochdale said they couldn’t possibly put the crustacean, who they’ve named Larry the Lobster, on their menu – and in fact, they’ve decided not to serve lobster at all any more.

Instead, they’re looking to find Larry a new home – and they’re asking for help.

“The chances of finding such brightly coloured crustaceans are one in a few million, but Larry the Lobster has turned up in today’s delivery like it was nothing to write home about,” the pair wrote in a social media post.

“We’ve decided something so rare can’t be ending up in a lobster roll so Austin and Emma have been phoning everyone from the Sea Life Centre to The Blue Planet to get our Larry a new home.

“If you know anyone at a marine centre who would like to save this incredibly rare beauty from the pot we’d be very grateful of the help.

“We’d love to see this incredibly rare creature delivered somewhere to be displayed or even released back to the sea, but when it comes to seafaring regulars we’re left high and dry.

“Anyone who can point us in the direction of the lobster rescue society we’d be very grateful.”

Head chef Austin only uses the freshest possible ingredients and wherever possible champions British produce, whether it’s sourdough from Ramsbottom or tomatoes from Worcester.

“So when a Scottish lobster proudly sporting patriotic bright blue tipped up with the seafood delivery, it was a beautiful thing to see but even rarer than his Canadian counterparts,” they said.

“When a bang average lobster is landed, their shells are normally a speckled brown right out of the water then bright orange once cooked. Larry’s striking blue shade comes from a genetic abnormality.

“We’ve also had a crisis of conscience.

“We’ve decided Larry shouldn’t be the only lobster saved from a grizzly fate just because of his dreamy blue coat.

“Austin and Lewi are rewriting our entire menu so that no more lobsters are harmed in the making of our exceptional British small plates.

Austin says he is currently waiting for the director of Sea Life Manchester to give him a call to help find Larry a forever home. 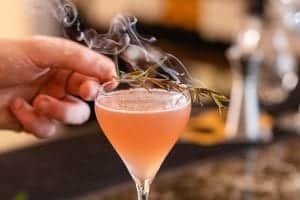 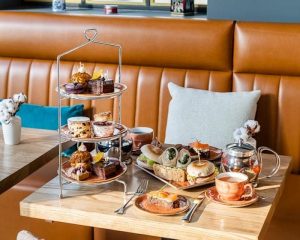 Vimto macarons anyone? Hotel Indigo’s new Afternoon Tea is about as Manchester as it gets 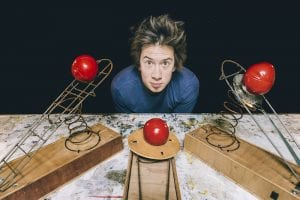