This is the place: Ramsbottom is one of the best places to live in the UK

You can’t go much further north in Greater Manchester than Ramsbottom. Sat up on the edge of the West Pennine Moors, this small town doesn’t just boast beautiful scenery. It’s a blend of contemporary and traditional and is packed with independent retailers and award-winning restaurants and cafes. And it’s a popular stop on the East Lancashire Steam Railway.

The name Ramsbottom has nothing to do with the rear end of a male sheep but is believed to derive from the Old English ramm and botm, meaning “valley of the ram”. 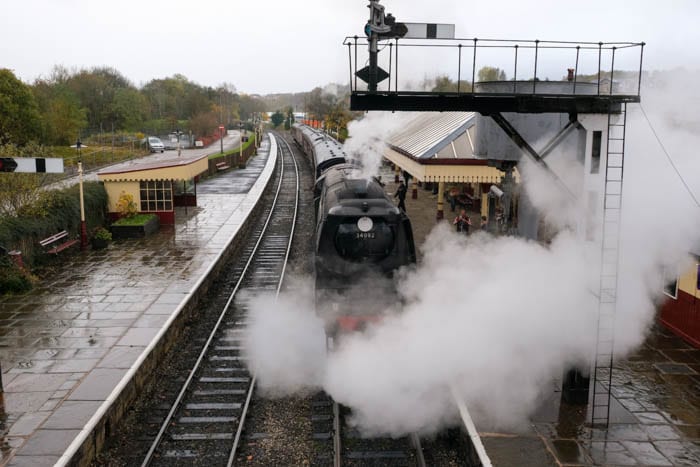 Packed with places to eat and drink, it’s a perfect spot to spend time trying local produce in award-winning pubs and restaurants, from indulgent afternoon teas to exquisite evening dining.

Ramsbottom is famous for its music scene, cricket and football, not forgetting pies, booze and Urnie, the gigantic sculpture of a tipped-over vessel. It’s both classical in shape to reflect the surrounding buildings but apparently bolted together to reflect the old industries.

The only downside we can think of? Well, the weather in Ramsbottom is fierce in the winter and it’s also prone to partial flooding after a bout of heavy rain. Rammy fans think that’s a small price to pay for being able to live in one of the best places to live in the UK. And there’s also the small matter of… 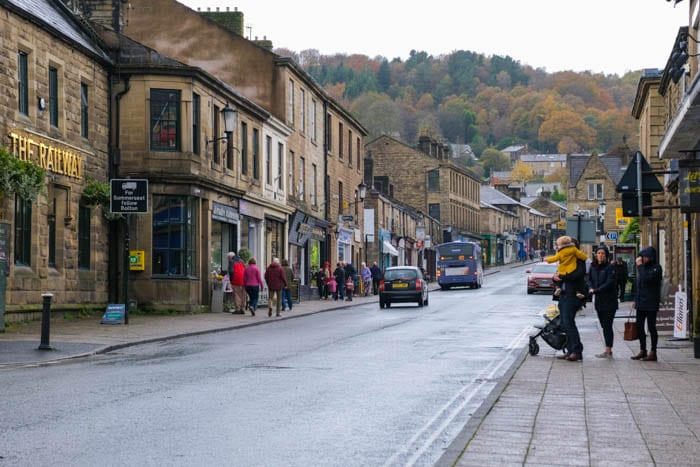 Ramsbottom was pretty cut off until the mid-70s when the M66 was built. Even now it isn’t as well connected to Manchester as you might like. It’s only 14 miles north but it can take up to 40 mins to get there by car – and that’s on a good day.

And it’s a bit of a faff to get to if you use public transport. There isn’t a local tram stop – the nearest is in Bury, then it’s a 20 minute bus ride to Ramsbottom. 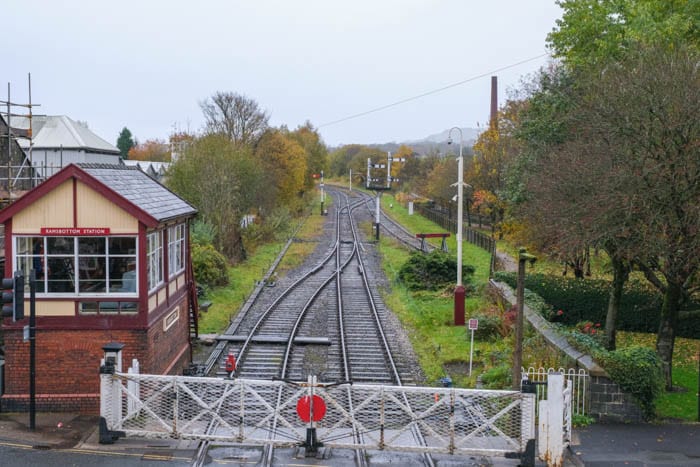 There’s a local train station, but unless you like a gust of steam with your morning commute, that’s not ideal either.

However, the proximity of the M66 and the A56 means you can make Bury, Bolton, Burnley and Blackburn in pretty good time.

Or should we say pubs and restaurants? Manchester’s thriving city centre food scene is well documented, but there’s more to explore in the smaller market towns. And you won’t find finer pubs anywhere in Greater Manchester – and possibly on Earth – than the ones in Ramsbottom.

And this leafy market town has become a real destination for foodies in recent years with  excellent tapas joints and traditional pubs serving up some mighty fine pub grub.

The Hearth of the Ram 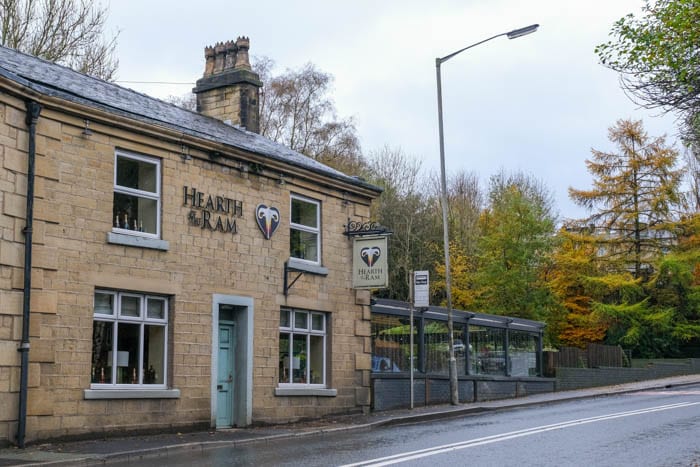 Euan and Dena Watkins opened the Hearth of the Ram in May 2012 after refurbishing the 200-year-old building. Set over three floors with ultra stylish interiors that showcase traditional period features, this characterful pub is an ‘all day, every day’ pub offering quality and value for money, serving elevated pub classics alongside more inventive dishes. The kitchen has a designated vegan menu and the Sunday roast is well worth the trip. 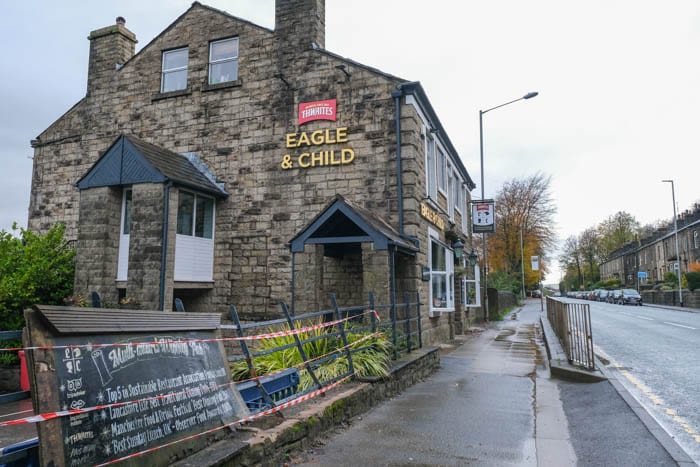 It’s easy to see why the Eagle and Child is one of the most popular pubs in town. This recently-crowned John Smith’s Great British Pub of the Year delivers far more than you might think. In addition to an award-winning menu, newly revamped dining room and a huge outdoor beer garden, this boozer also recruits marginalised and unemployed young people, giving them a second chance in life. 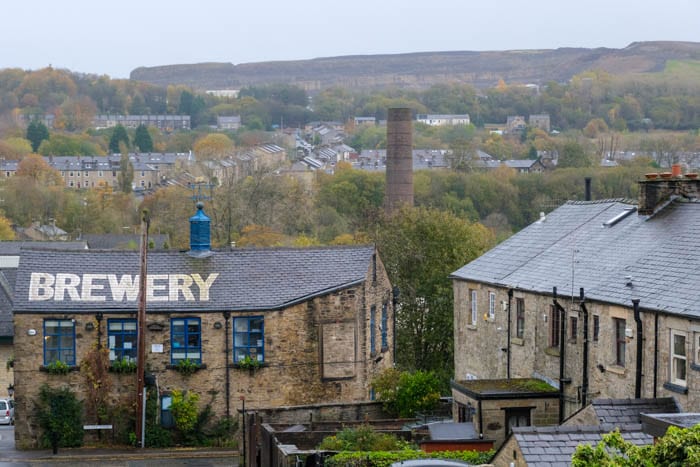 Situated just above the brewery itself, the Irwell Works Brewery Tap is a friendly pub that serves up a selection of their home brewed beers, including the ever popular Costa Del Salford and Mad Dogs and Englishmen. It also serves an astoundingly cheap selection of snacks and pub grub including hot pork pies and freshly made sandwiches. 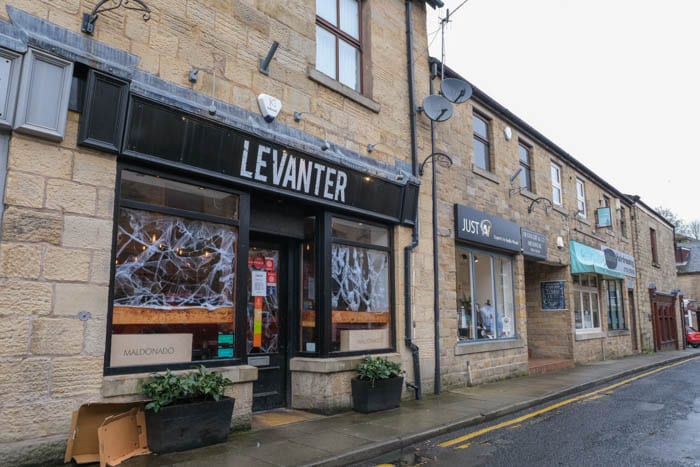 Most people would agree that Levanter is the flag-flyer for the food scene in Ramsbottom. It’s famous for its thick cuts of Txuleton beef, crispy croquettas and charcuteria and the no-nonsense tapas feature an impressive and carefully curated selection of ingredients imported from Spain by the owners. It’s informal and relaxed – just turn up, order some drinks at the bar, grab a table and lap up the atmosphere. The perfect place for a quick bite or willing the hours away with your family. 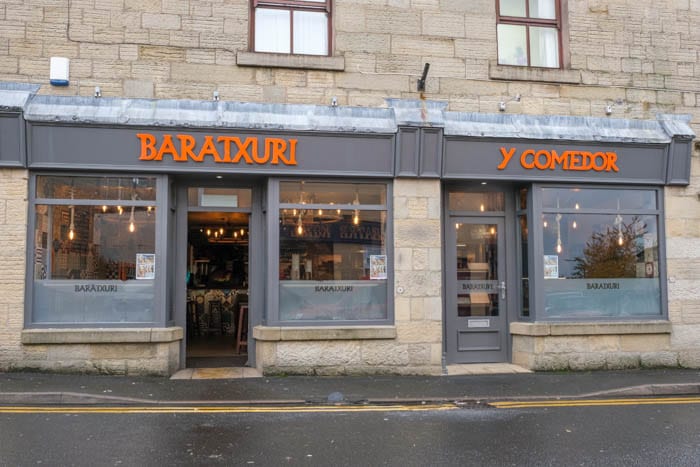 Just round the corner from its sibling Levanter, Baratxuri is a little slice of northern Spain tucked away down a Ramsbottom backstreet but without the Spanish weather. The pintxo bar offers table-top bites, while a new restaurant offers table service, serving huge sharing portions of meat and fish cooked whole in the specially imported wood-fired oven. Baratxuri packs a punch that some bigger towns and cities could only wish for.

Cheese and wine is one of life’s great pleasures and at The Mouse Trap they serve them both in abundance. Oversized platters are affordable and the service is informed and friendly. This intimate venue has a fully stocked bar and cheese counter and fills up quickly so make sure you book in advance. For drinkers, comfy seating looks out onto Ramsbottom. A fun place to brie. Sorry. 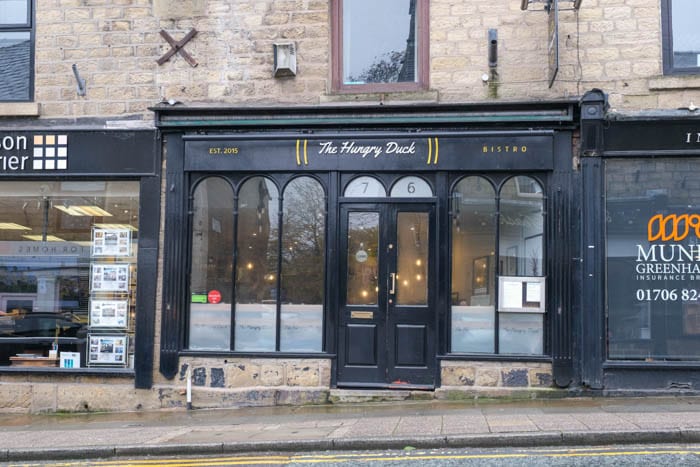 This small, ‘fiercely independent’ bistro serves simple but well executed plates of modern British cuisine alongside some cracking wines and gins. Sourcing local ingredients and making most of the seasonal variety, owner Joe Kaczmar makes sure they put their heart and soul into everything at the Hungry Duck. This neighbourhood joint recently underwent a big refurb, going for a fresh, bright fit-out as a backdrop to the pretty dishes which come out of the kitchen. 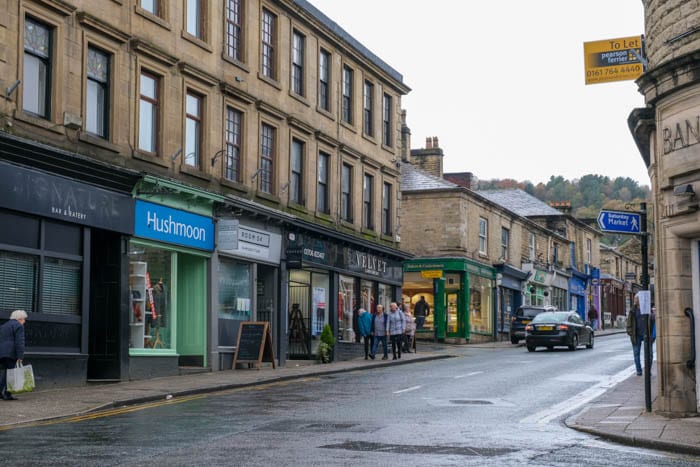 A host of independent shops selling gifts, homeware, local artwork, antiques, vintage treasures and designer clothing are scattered all over Ramsbottom. There’s a farmers market on the second Sunday of every month and the Christmas Street Market is well worth a visit. That tends to appear around the middle of December.

Another crowd pleaser is plastic-free shop Plentiful, the first of its kind in Greater Manchester, which saves 10,000 pieces of plastic from unnecessary use per week. Top up your washing-up liquid, detergent, all your bathroom refills, spices, pasta, cereals – the list is endless. 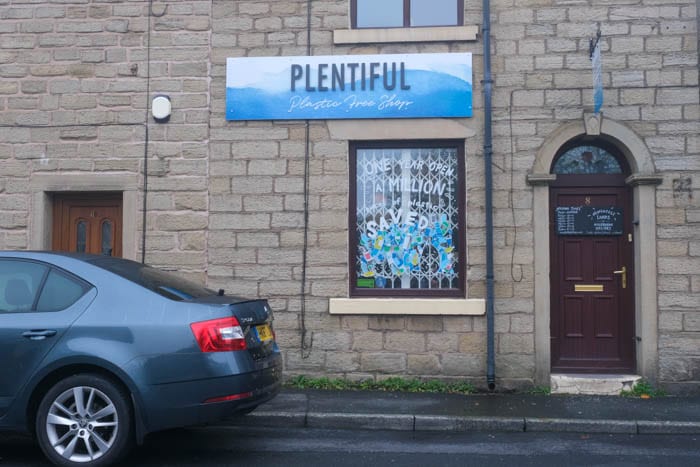 Ramsbottom has three big supermarkets – Aldi, Tesco and a Morrisons – but there are plenty of shops where you can get your hands on some locally sourced produce, like award-winning butchers Walmsleys, which is more often than not heaving with customers.

The award-winning, family owned The Chocolate Cafe is the perfect destination for chocolate loving shoppers and walkers to take a well-deserved break and is open throughout the year. The cafe upstairs serves hot chocolates and artisan roasted coffee with a range of sweet and savoury classics. 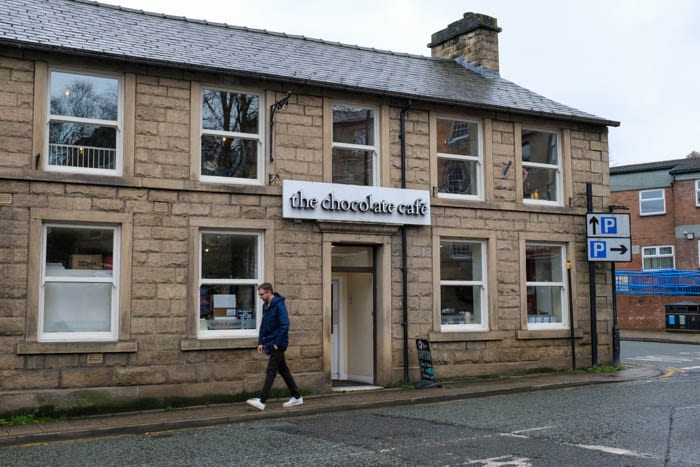 Hearts for Homes opened in 2016 and sells unique and well-designed homeware, cute gifts and a wide selection of locally, handmade crafts and work by local artists.

This well known landmark was erected in 1852 in tribute to Sir Robert Peel, the Bury-born founder of the police force and prime minister. The tower stands at 128ft high and offers stunning views over Manchester and north Wales – on a clear day. Thousands of people climb Holcombe Hill annually and on Good Friday it’s a tradition to walk up the hill and take part in an egg rolling competition.

The park also forms part of the Irwell Sculpture Trail which features 28 art pieces and follows a well established 30-mile footpath stretching from Salford Quays through Bury and up into the Pennines. 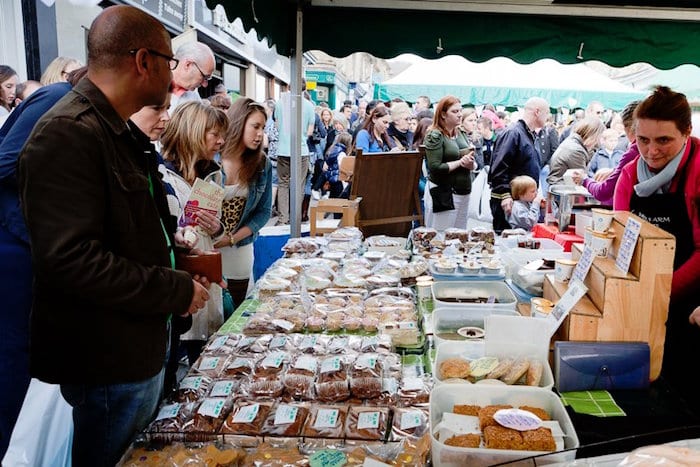 Ramsbottom has plenty to enjoy across the year.

There’s an award-winning Chocolate Festival the weekend before Easter. And The World Black Pudding Throwing Championships have a starring role in the East Lancashire Railway’s 1940s Weekend every September. Participants have to toss black puddings in an attempt to dislodge a stack of Yorkshire puddings (it’s Lancashire v Yorkshire, see) on plinths on two levels – one for children, the other for adults. The person who dislodges the most Yorkshire puddings in three attempts is the winner.

Ye Olde Gamecock Show, an exhibition of game fowl, is held in the town on New Year’s Day. It replaced the annual cockfighting competition that took place in the town square after the New Year Holcombe Hunt. The exhibition is organised by the Holcombe Old English Game Fowl Club and is said to be the oldest gamecock show in the world

There’s an annual rhythm & blues festival and the now defunct pub The Corner Pin was where the band Elbow played their first gig. 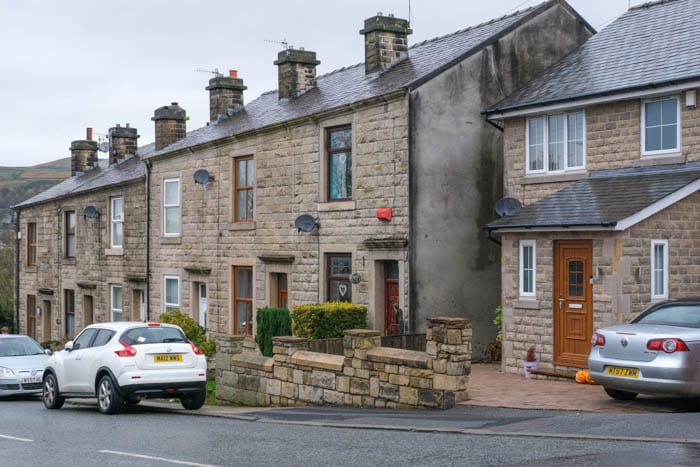 As you might expect in a place that’s featured in The Sunday Times Best Places to Live guide – often in a top 5 spot – property in Ramsbottom is in demand, with houses typically sold within a few weeks of going on the market.

There’s a wonderful selection of fine Victorian stone townhouses, semis and a heck of a lot of terraces lining the old roads out of town. You’ll find delightful old weavers’ cottages dotted all over Ramsbottom and the odd 18th-century job.

There are some great farmhouses out of town. Large detached and townhouses start at about £425,000 going up to £900,000+, which is a steal compared to South Manchester prices. Semi-detached come up at approximately £160,000-£450,000 whilst terraced and cottages start at approximately between £110,000.