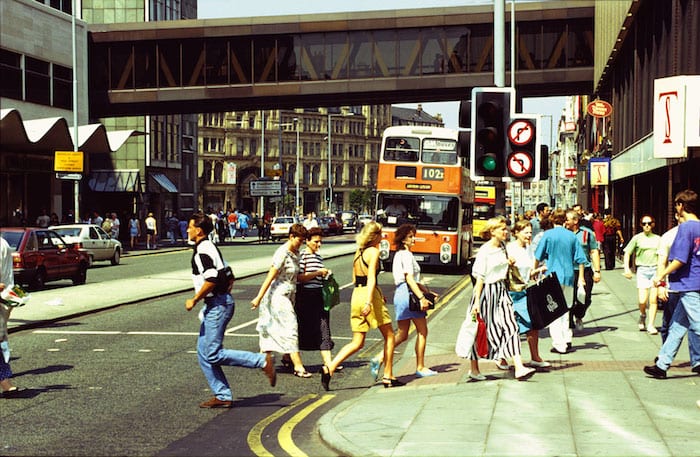 Manchester is one of the most successful and dynamic cities in Europe and second only to London in the UK. Jeremy Clarkson recently named it first, albeit ironically.

But how did we get here? 1970s Manchester was notoriously grim. Thousands of clapped out pre-war terraced homes – the so called slums – were replaced by what quickly turned out to be worse – the now vanished Crescents of Hulme and the “forts” of Beswick and Ardwick, leaving whole communities shattered.

Traditional industries like heavy engineering and textiles were in a state of collapse, industrial relations in a state of war. And neither of the city’s major football clubs managed a single first division championship between them through the entire course of the 1970s and 1980s.

Nationally, Britain was in steep economic decline with the Labour government, struggling with a tiny majority, seemingly powerless to repair it. In the aftermath of the chaotic “Winter of Discontent”, Margaret Thatcher swept into Downing Street in no mood to prop up ailing northern industries. Unemployment soared above three million. “Loadsamoney” policemen waved their overtime-bloated pay packets at striking miners.

In Manchester, a cadre of young, hard-left activists, disenchanted with a deeply split Labour opposition’s response to Thatcherism, took over the city party and then the city council on a ticket pledging “no cuts, no redundancies”. There was also a stubborn reluctance by the town hall to do business with the private sector.

By 1987, the wheels had well and truly come off. Faced with the prospect of a government- imposed rate cap and having exhausted an inventive but limited catalogue of creative accounting – such as leasing out major town hall assets like Central Library and Wythenshawe town centre to a wholly council-owned mortgage company, then leasing them back – the money ran out.

There would be no rescue by a Labour government – even if one had been so inclined – because later that year, Mrs Thatcher won a third successive election victory by a landslide.

When the 20th anniversary of the IRA’s devastating attack on Manchester was marked in 2016, it appeared to have become generally accepted that the bomb – the biggest ever detonated on the British mainland in peacetime – was the game-changer that triggered the renaissance of the city.

Nothing could be further from the truth.

This is the theme of a forthcoming talk by I Love MCR writer Ray King, who was there at the time and reported on the aftermath. He believes that this version of history is tantamount to crediting the terrorists, who wounded 200 people and all but destroyed the city’s commercial heart, with doing Manchester a favour.

So who were the bombers? What happened to them? And more importantly, what had already changed in Manchester to enable the city to recover so well from what was, in reality, a disaster?

Manchester-born King has been a journalist since the mid-1960s. Educated at the now vanished North Manchester Grammar School, he joined the Manchester Evening News in 1970 after short spells at a leading city news and sports agency and as a publicist in the heyday of Granada Television.

As an industrial correspondent he reported on the collapse of traditional industries in the north west, the coal miners’ disputes of the 1970s and 1980s and the subsequent, often violent,  industrial strife.

In 1979, he became the paper’s northern political correspondent, chronicling not only the turbulent events in Manchester following the hard Left’s town hall coup of 1984, but also national politics, in particular party conferences.

He was in the room when the lady wasn’t for turning, when Neil Kinnock launched his “black taxi” tirade against the Militant Tendency, and in Brighton when the IRA attempted to assassinate Mrs Thatcher’s Cabinet.

Highlights of his career include following Manchester’s 2000 Olympic bid to its denouement in Monte Carlo; lecturing journalists from the former Soviet republics at a seminar in Armenia on how to report free elections; covering the historic election of Nelson Mandela from Johannesburg, and charting the rise and rise of Manchester from political and economic basket case to the successful city we see today – despite the attentions of the IRA bombers of 1996.