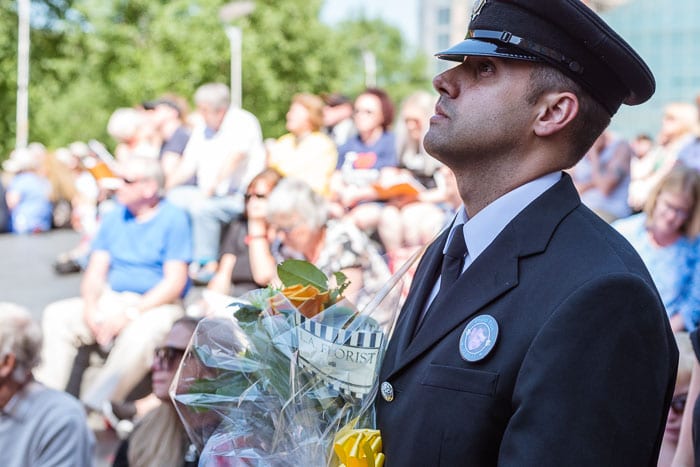 A cathedral service, a mass sing-along and a national minute’s silence were some of the events which yesterday marked one year since the attack at Ariana Grande’s Manchester Arena concert.

People showed their support and solidarity in many ways. Hundreds of tributes, flowers and messages of support were left across the city as well as 7,000 knitted and crocheted hearts.

A trail of 28 Japanese Maple trees made from last year’s memorial flowers led from the station to the Cathedral Gardens for people to hang a message of hope on their branches, and song lyrics were projected onto St Ann’s Church. 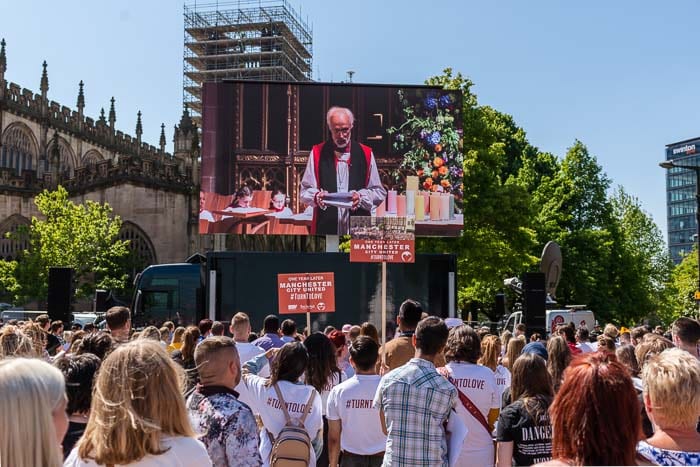 Those invited to the 2pm service at Manchester Cathedral included survivors of the arena attack along with their families and friends, first-responders and those who helped in the immediate aftermath.

The leaders of all the main political parties attended the service as well as Prince William, who read a Bible passage from the Book of Corinthians.

Opening the multi-faith service, the Dean of Manchester told the congregation: “In this service we come together as people of different faiths and none, as we remember with love before God those whose lives were lost, and those whose lives have been changed forever and have to live with the terrible memories of that day 12 months ago.

As well as hymns and prayers, the service included readings by pupils of Chetham’s School of Music and Whalley Range High School for Girls, and a moving rendition of Over the Rainbow sung by the Halle Youth Choir.

During the service, 22 candles fashioned from the thousands left behind at the memorial in St Ann’s Square last year were lit – one for each of the victims – and a minute’s silence was observed.

It was an emotional atmosphere in Cathedral Gardens. Following the service, the crowd of hundreds who had gathered to watch it on the big screen broke into spontaneous applause. Many hugged their neighbours. Then a single balloon in the shape of a bee was released into the blue sky.

In the evening, around 15,000 people descended on Albert Square for the Manchester Together – With One Voice concert with over 3500 singers coming together for a mass-singalong. 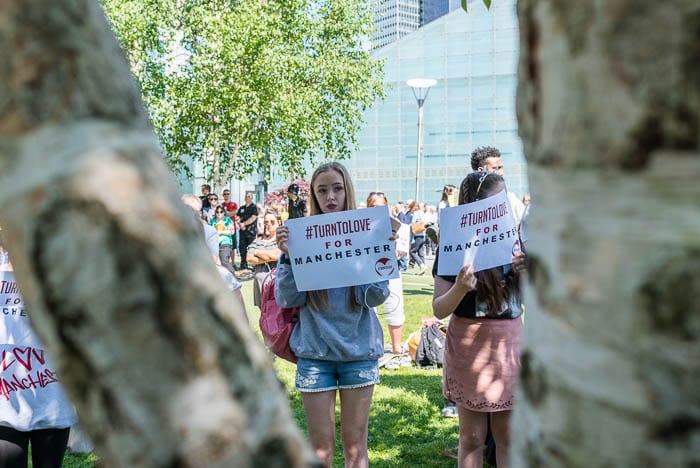 The crowd gathered in the same spot as last year’s vigil, but the atmosphere this year was more upbeat, with people eager to celebrate the city’s strength, resilience and community spirit.

Among those performing were the Emergency Services Choir, who sang Bridge Over Troubled Water, and the Manchester Survivors Choir, a group made up of people who were at the Arena on the night of the concert.

“We are showing Manchester and the world that we carry on,” Survivors Choir member Cath Hill told the gathered crowds, who spilled out into the sunny streets adjoining the square. 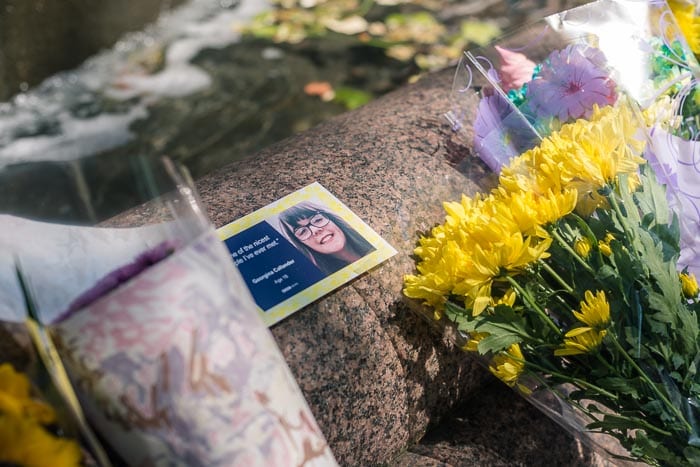 “It is so important for us to be together. We are here to look after each other, care for each other and to be positive and move forward.”

Poet Tony Walsh, who read his poem This Is The Place at the public vigil last May, encouraged the crowd to make a minute’s noise rather the a minute’s silence. It was a poignant way of celebrating the first responders, the NHS staff involved and “Manchester and its spirit and its amazing people”.

A half-hour communal sing-along saw crowds belting out Oasis’ Don’t Look Back In Anger, Elbow’s One Day Like This, Ariana Grande’s One Last Time, Take That’s Never Forget and The Beatles’ All You Need Is Love.