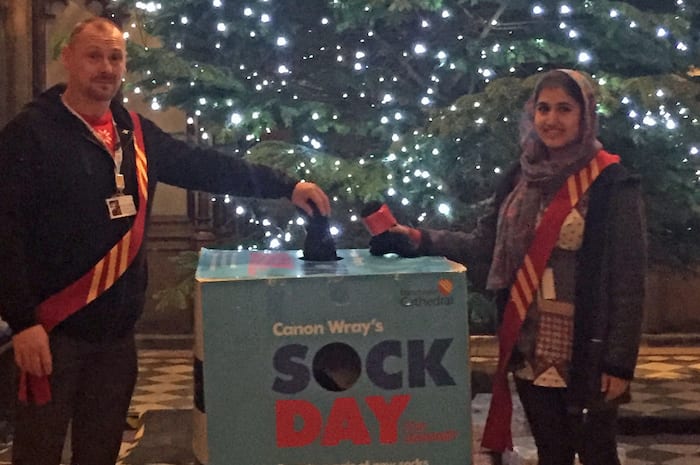 Received socks again this Christmas? Don’t roll your eyes – you can donate them to Manchester’s Canon Wray Sock Appeal and help those who need them more.

Manchester Cathedral will find a good home for any pairs of new, warm socks that people would like to donate to support the Booth Centre in looking after those who find themselves homeless at the turn of the New Year.

From now up until 21st January 2019, the Canon Wray Sock Appeal will collect new pairs of socks or any surplus pairs received over Christmas. This year they will also be accepting hats, scarves and gloves.

A contemporary of Joshua Brookes, Canon Cecil Wray was a very popular, if slightly eccentric, priest who died in 1866.

Canon Wray was not afraid to speak his mind or get involved in Manchester’s political and social issues. He campaigned for new schools and the reduction of the working day to 10 hours for mill workers, and was known for his sympathy for the needs of the poor.

Records also show that he was a rival to the claim of being the most prolific baptiser and ‘marrier’ in English history. He presided over 33,211 christenings, 13,196 marriages and 9996 funerals as a result of the massive growth in population during the Industrial Revolution. 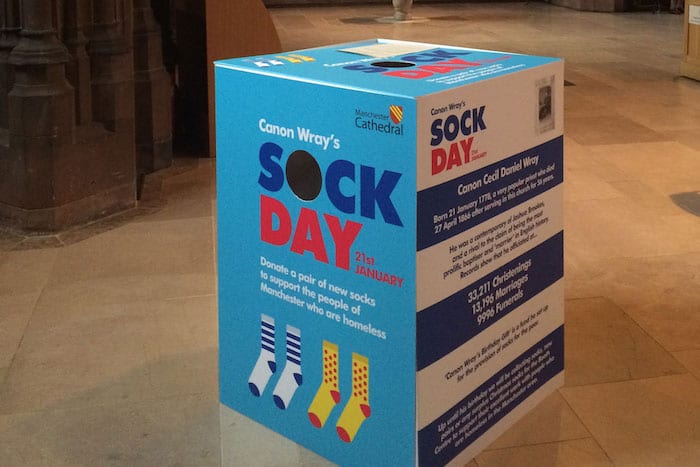 Canon Wray’s ‘Birthday Gift’ is a fund he set up in 1866 for the provision of socks for the poor on the anniversary of his birthday.

Aged 88, having been a member of the Collegiate Church 56 years, he promised an annual sum of £4 to be paid to the Minor Canons for “the purchase of good worsted stockings, which they shall give yearly on 21st January, my birthday, or on the following day if the 21st happens to be a Sunday, to eight poor men and eight poor women, usually attending the services at the Cathedral, two pairs of stockings to each.”

It was his wish that this charity should be named Canon Wray’s Birthday Gift.

“We are delighted to be supported by the Cathedral’s sock appeal once again,” said Amy Hinks, development manager at the Booth Centre.

“A new pair of socks can seem like a small thing, but they are so essential for people sleeping rough on the streets. This small act of kindness can have a big impact, and really help someone in need during the winter months.

“Thank you to everyone who donates a pair of socks, we really appreciate the support!”

“This is a wonderfully practical response to the problems faced by homeless people during winter: warmth and protection for heads, hands and feet,” said Manchester Cathedral Sub Dean, Canon Dr David Holgate.

New, warm socks can be donated from now until Monday 21st January 2019 at Manchester Cathedral.