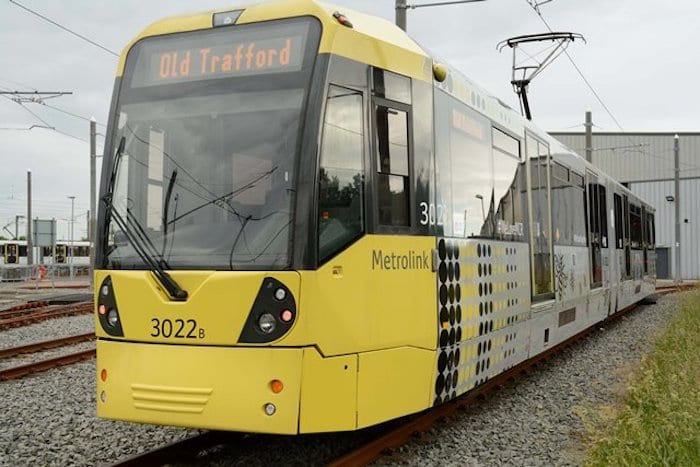 The dramatic growth in what is already the biggest tram network in the UK will come with the advent of tram-trains able to operate on existing tram lines in the street as well as on heavy rail routes.

Common in Germany, France and Holland, tram-trains have been operating on a pilot basis between Sheffield and Rotherham in south Yorkshire since last October.

The expansion has the backing of Transport Secretary Chris Grayling who recently met Greater Manchester mayor Andy Burnham while visiting the under-construction £350 million Metrolink line to the Trafford Centre.

A new tram-train network is seen as the answer to the city’s severely congested rail route between Oxford Road and Manchester Piccadilly stations. Plans to build extra through platforms at Piccadilly were put on hold by Mr Grayling last year.

But the Transport Secretary now says: “There are several hundred million pounds set aside for the centre of Manchester in the next few years to ease capacity problems and I want to make sure we spend that in the best possible way.”

Mr Burnham, who has been highly critical of Mr Grayling over the chaos following the introduction of new rail timetables last year, said he was “really encouraged” by the minister’s intervention. Tram-trains “could take this city to that London-style, world-class transport system”, he said.

The development marks a dramatic turnaround for ambitious transport plans in Greater Manchester. Ten years ago the first major expansion of the Metrolink system to the airport, Ashton-under-Lyne, Oldham, Rochdale and Didsbury was in grave doubt following the public’s rejection in a referendum of congestion charging as a means of paying for it.

The mayor told The Guardian that Network Rail was currently working on a report on how best to solve capacity issues in Manchester.

“If that says tram-train is the best option to progress quickly, I would hope it could be a matter of a few years to see the first tram-train vehicles in Greater Manchester. Three to five years possibly, as soon as that.”

He added: “We haven’t had a cheque from him or anything like that, but when the government comes out and says something like this, they don’t do so lightly, so I am very encouraged by what the secretary of state has had to say.”

Transport for Greater Manchester (TfGM) say that the development of the tram-train is a key component in delivering a fully-integrated, high-capacity transport system across the city region.

A spokesman said: “TfGM’s track record at delivering large-scale infrastructure projects demonstrates we have the skills and expertise to deliver tram-train. This is proven by Metrolink’s phenomenal expansion programme, which has been one of the largest and most ambitious transport projects to be delivered in the UK and is unprecedented in the light rail industry in terms of the size and scale of growth.”

Tram-train would be part of the public transport system of Greater Manchester and tram-train vehicles would run on both Metrolink and Network Rail tracks, in conjunction with heavy rail passenger and freight trains.

The system is widely used in mainland Europe and maximises the use of existing infrastructure with typically only a short connection – known as ‘transfer tracks’ or ‘chords’ – needed to join the heavy rail and light rail networks together.

A tram-train system in Greater Manchester could reduce congestion, improve air quality and deliver more seamless, integrated and frequent journeys for passengers across the city-region and into the city centre via the Metrolink tram system.

It would provide new routes, better connectivity and add more capacity to our heavy and light rail networks, thereby improving access to jobs, skills and training.

By using existing lines it removes the need to develop entirely new infrastructure, other than ‘transfer tracks’. The size of the current tram network – the largest light rail system in the UK – and the fact it has a ‘high-floor’ system is also a significant benefit that will assist us in delivering on this scheme.

TfGM is currently developing three ‘Pathfinder’ schemes for tram-train routes – Manchester City Centre to Hale via Altrincham and Manchester Airport to Wilmslow in the south and – and Oldham to Heywood via Rochdale and Castleton in the north.

Alongside this the authority is also developing proposals for a route on the Atherton line between Manchester and Wigan, which would improve connectivity in the west of the conurbation.

TfGM has also identified other potential routes where tram-train could run in the future. These are:

The spokesman said: “We are committed to working closely with the Department for Transport and Network Rail to develop the proposals for tram-train across Greater Manchester and we hope to bring forward proposals by summer 2019.

“Our ambition is to have some services operating in five years.”