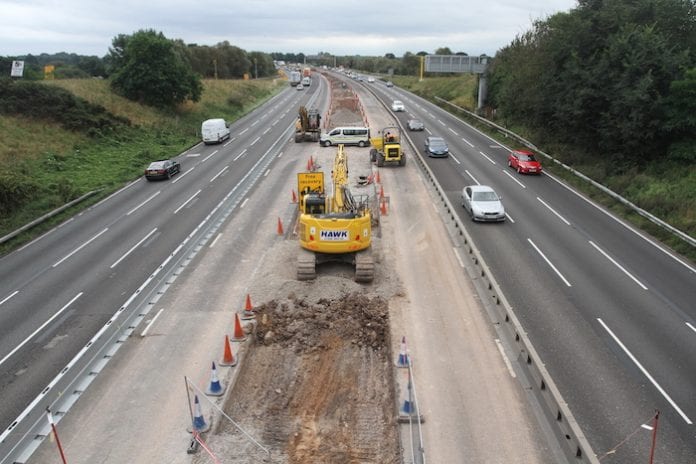 First the good news: the end is in sight after three years of motorway misery on the M6 through Cheshire with the completion of the £250 million “smart” motorway between junctions 16 and 19 in the new year.

Now the bad: barely a year will pass by before Manchester’s vital arterial route to the Midlands and the South is subject to major road works yet again – this time at junction 19 with the A556 near Knutsford.

The planned £50 million scheme promises another 18 months of delays and disruption.
Highways England recently crowed that they’re “closing in on completion of your new smart motorway after passing several key construction milestones during the summer.”

Their aim is to finish the junction 16-19 project affecting the Cheshire M6 junctions, begun in December 2015, by the end of March 2019.

But upcoming carriage closures mean there will be a sting in the tail for motorists across Greater Manchester.

A Highways England spokesman said of the M6 Cheshire completion: “From autumn 2018 into early 2019 we expect to complete resurfacing, finish installing gantries and verge works including drainage, vehicle barrier installation and cabling, and install all new signage. Much of this will be done overnight during full carriageway closures when the roads are quieter.

“Once construction is complete, we’ll remove the current narrow lanes so we can test the newly installed technology. During this process, all-new cabling, signage and communications equipment will be checked so we’re ready to open by spring 2019.

“The scheme will be completed in phases starting with the northern section between junctions 18 and 19, with all of the roadworks due to be removed by spring 2019.”

Enjoy it while it lasts, for early next year the agency intends to publish draft orders that will enable it to start carrying out the improvements to key junction 19 at Tabley – Manchester’s nearest access to the M6 – by spring 2020 at the latest.

This busy junction is currently used by around 65,000 vehicles each day and is in need of improvement to meet the expected increase in traffic coming from the M6 and the A556.

This increase is further exacerbated by the expansion of Manchester Airport (Airport City) and the development of the Wythenshawe MediPark.

M6 junction 19 improvements are part of a wider collection of schemes to improve connections between Cheshire and South Manchester, including the completed A556 between Knutsford and Bowdon, the improved B5569 and the M6 junction 16-19 smart motorway.

Highways England say: “The changes are vital for reducing congestion in the future, improving safety and journey time reliability for all road users and increasing connectivity between local areas. The plans will also improve access for walkers and cyclists.

In an area of the North West with significant aspirations for economic growth – around 100,000 new homes and 300,000 new jobs, including the Manchester Airport City Enterprise Zone are envisaged – transport connectivity is deemed critical.

Delays and unpredictable journey times affect business activity and disrupt people’s ability to access their place of work or go about their daily business. As delays and congestion increased without the scheme, M6 junction 19 would “act as a barrier to economic growth”, they claim.