Marcus Rashford has been named in Time magazine’s Next 100 list as someone who is helping shape the future, in recognition of his campaigning work on child poverty.

The 23-year-old Manchester United and England forward appears under the classification ‘advocates’ on the list, which also comprises athletes, entertainers and political leaders.

“Everyone on this list is poised to make history,” says Dan Macsai, editorial director of the TIME100.

“And in fact, many already have.”

“By standing up for the most vulnerable in our society, and using his platform and influence to create positive change, Marcus inspired countless others to join him on this mission and cemented his status as a role model,” writes Lewis.

“In a year that showed us the power of working together toward a common goal, he was a galvanizing force behind uniting people across the UK in the effort to ensure no child goes hungry.

“His determination, resilience and persistence have been truly inspiring.

“I cannot wait to see how he continues this important work.” 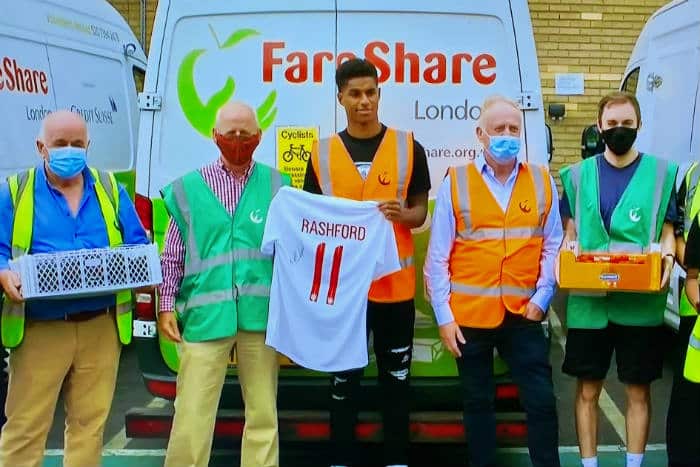 Marcus was made an MBE in the Queen’s Birthday Honours for his work fighting child food poverty over the past year.

His work for the provision of free school meals in England during holidays and other support to low-income families prompted major changes in government policy.

Marcus’ campaign started after the UK went into lockdown in March, when he began working with FareShare to raise money to give meals to vulnerable people.

In June, he told the BBC that about £20m had been raised to supply three million meals.

He then wrote an open letter to MPs, urging the government to reverse a decision not to provide free school meals during the summer holidays, driven by his own experiences.

He won the Supernova award at the This Is Manchester Awards in December, and was also recognised with a special award at BBC Sports Personality of the Year.