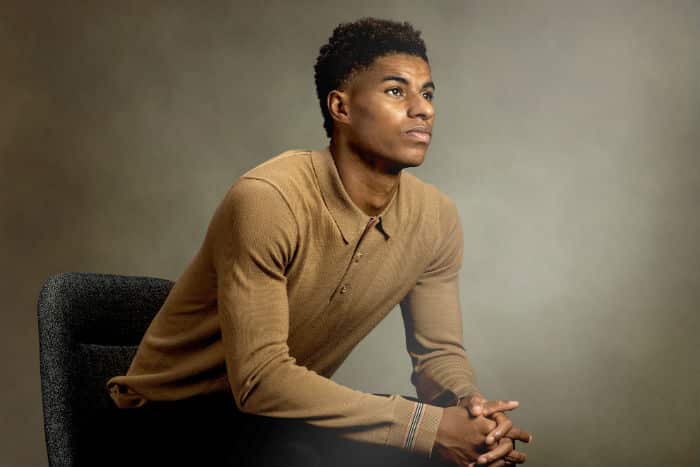 The site, which allows people to find help in their local area, coincides with a documentary about his campaign to tackle child food poverty
Share
Tweet
Share
Chat

At the start of 2020, Marcus Rashford was a Manchester United and England footballer. He will end the year as an internationally recognised social justice campaigner on child food poverty.

His work for the provision of free school meals in England during holidays and other support to low-income families prompted major changes in government policy, and he was made an MBE in the Queen’s Birthday Honours list.

Last night, a Panel Special Award was presented to the footballer at the BBC Sports Personality of the Year 2020 to recognise his work to raise awareness of child food poverty in the UK.

And now, Marcus and the Child Food Poverty Taskforce have launched a new website, coinciding with the transmission of a new BBC documentary which has been following his campaigning efforts to tackle child food poverty.

In Marcus Rashford: Feeding Britain’s Children, which will air on BBC One tonight, the 23-year-old lets us into his family life, and into his campaign to tackle child food poverty.

His mother Mel, a single parent of five, explains how she worked three jobs when Marcus was growing up.

While working as a bookmakers’ cashier, she took on another job in the shop.

“I used to finish my shift and then go back and do the cleaning,” she says, adding: “I used to do pot-washing on a Saturday as well.”

Mel says there were times she served up food for her children but there would not be enough for herself.

“Sometimes we didn’t even have a loaf of bread in the house,” she says. “But I wouldn’t tell somebody I was struggling – it was embarrassing.”

In one scene in the documentary, Rashford visits Wythenshawe, where he grew up, and reflects on how local businesses supported him and his family.

“If they knew my mum was in work, they’d just let me have a portion of chips or something,” he says.

Marcus’ campaign started after the UK went into lockdown in March, when he began working with FareShare to raise money to give meals to vulnerable people.

In June, he told the BBC that about £20m had been raised to supply three million meals.

He then wrote an open letter to MPs, urging the government to reverse a decision not to provide free school meals during the summer holidays.

Marcus was driven by his own experiences.

“The system was not built for families like mine to succeed, regardless of how hard my mum worked,” he wrote.

In the BBC film, he says it was “out of character” for him to open up about something so personal, but he believes it was necessary.

In touching scenes, he visits his primary school, Button Lane.

Head teacher Emma Roberts tells him she is so proud of what he is doing, and Marcus talks to pupils and shares his stories of meeting friends for life in breakfast club.

The new website – endchildfoodpoverty.org – includes a map that allows people to find help in their local area, as well as information on how people can donate and volunteer this winter.

Local authorities, businesses, food banks, charities and sporting organisations have all signed up, presenting their offers of food support to young people and families throughout the winter period and beyond.

The website also contains information on how people can offer support, either through donating money or volunteering.

“Following the government investment, it was important to me that we supported by communicating on the help available in local areas, working closely with local authorities, so that our vulnerable families know where to turn when faced with the toughest winter on record,” said Marcus.

“In partnership with Co-op and Google, we have developed a central hub for those who need help and those who want to help.

“That second function was really important to me – everyone has a role to play in ending child food poverty in the UK and we wanted to support those who want to make a difference.

“There is still so much more to be done but the least children deserve this year, after loss and disruption, is a Christmas dinner on the table.”