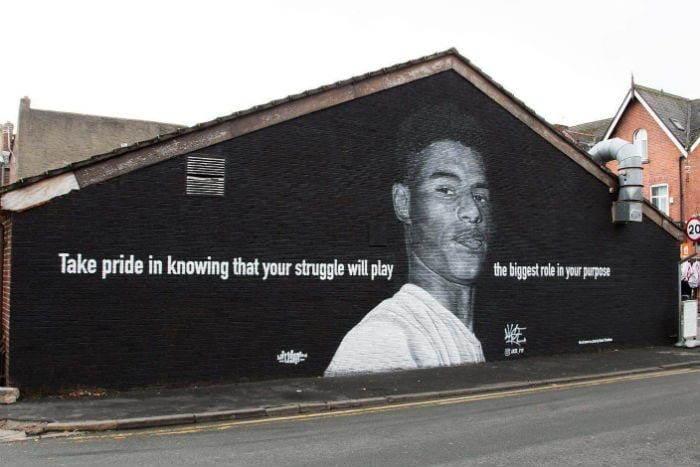 Following Marcus’ campaign, the government announced it would spend more than £400m on a winter grant scheme to support poor children and their families in England.

“I hope this mural will inspire the local community as Marcus has inspired the whole nation with his campaign to fight child food poverty,” said Akse.

Marcus’ mother provided the quote on the mural, which reads: “Take pride in knowing that your struggle will play the biggest role in your purpose.”

Now, the portrait on the wall of the Coffee House Café on Copson Street is finished – and the reaction has been overwhelmingly positive.

Marcus, who grew up in Withington and played for Fletcher Moss Rangers FC before moving to Wythenshawe, took to social media to thank the artist for the portrait.

“Ok I usually get embarrassed sharing these things because this journey was never really about me but I know this took a lot of time and effort @Akse_P19 and I wanted to say thank you,” he tweeted.

Ok I usually get embarrassed sharing these things because this journey was never really about me but I know this took a lot of time and effort @Akse_P19 and I wanted to say thank you ♥️ pic.twitter.com/alGcHW0gXH

People were quick to reply to the Manchester United striker to say that the piece was inspirational.

“There’s no need to be embarrassed,” tweeted Miss Hillsmith in response to the footballer, who became an MBE in the Queen’s Birthday Honours list last month.

“You are making a huge difference to families across the country and are a fantastic role model to younger people.

“You are the positivity we have all needed during lockdown. Thank you so much.”

Sam Whyte tweeted: “It’s fabulous, mate. What this and you represent is magnificent. You’ve done our city proud.”

“This is amazing,” tweeted Lisa M.

“He hasn’t been able to get out much lately with Covid & the risk so you have ALL made more of a difference than you could even imagine on people/the community. Thank you.”

Twitter user Charlotte said: “No one who’s achieved what you have, has anything to be embarrassed about.

“Not only do you do wonderful acts, but you inspire others to also, that is invaluable.

“So when people see your picture, it reminds them to try harder, to help others.”

And St John’s Roman Catholic Primary School in Chorlton tweeted that Marcus is “an inspirational role model for our children.”

Well deserved recognition for @MarcusRashford what an inspirational role model for our children. https://t.co/ZDoLPM8SPR

The artwork, which was based on a photograph by Daniel Cheetham, was done in collaboration with Withington Walls, a community street art project.