The alcoholic, artisan ice cream specialists found their first permanent home after founder, Alanna Atkinson, practiced with an ice cream maker at home and discovered a sweet recipe of success.

“I bought an ice cream machine from the Trafford Centre,” says Alanna, “bought loads of ingredients from Asda, and played around at home during the pandemic.”

It wasn’t long before she mastered ordinary ice cream and moved on to making boozy ice cream, as well as sundaes, sorbets and milkshakes that are all aptly based on drinks. 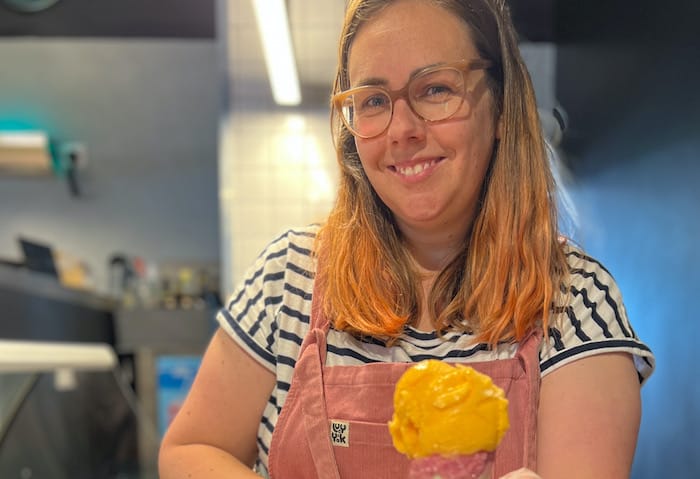 Alanna moved to Manchester from Nottingham over a decade ago.

“I love Manchester. I moved here 12 years ago and met my husband here. My daughter’s name is Bee, named after this beautiful city. Three loves of my life: Manchester, my daughter and my husband. Which particular order depends on what day you ask.”

A Few Scoops was launched by touring Greater Manchester (and beyond) in a beloved baby pink tuk tuk (Jolene) and vintage bike (Dolly) serving ice cream and sorbet last summer. The TukTuk is still parked in MediaCity whenever the elusive Salford sun shines, and is also available for private hire. 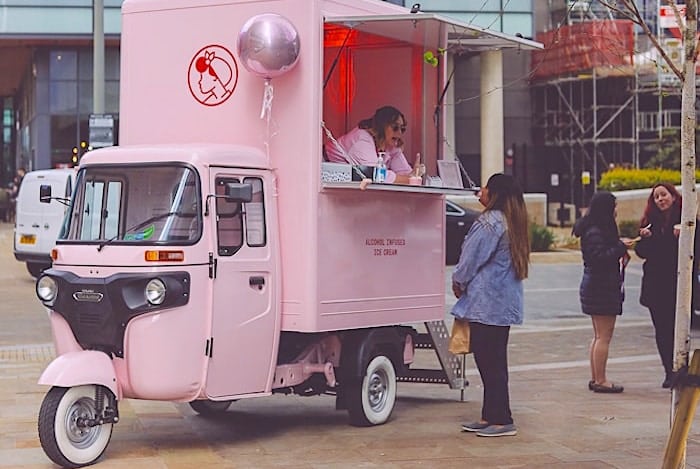 So how alcoholic are these boozy ice creams?

“My first alcoholic ice cream creation was an espresso martini,” she continued, “but my favourite is Cherry Amaretto.” 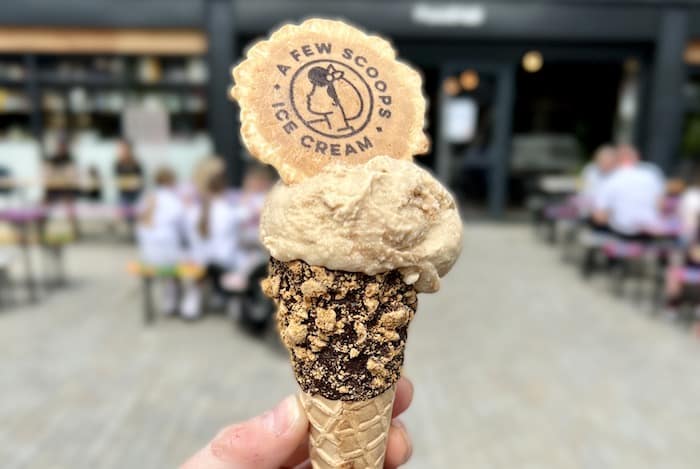 Her dreamy sundae menu – where their homemade made ice cream meets warm brownies, sugar waffles and cookies – and a new milkshake menu sits alongside savoury sweet treats like French toast and pancakes.

This year they joined Sale Foodhall’s residents Basilico Pizza and What’s Your Beef Burgers creating an independent street food family all in one 130 cover community hub.

“Both Foodhalls and the General Stores have been so supportive of A Few Scoops since we launched in May last year.”

The luxury ice cream brand since went viral on TikTok, with some videos reaching over five million views.

So what’s next for Alanna and A Few Scoops?

This is just the beginning for Alanna and A Few Scoops plans.

“Hopefully will be available in high end stores soon – like Selfridges and Marks and Spencer.”