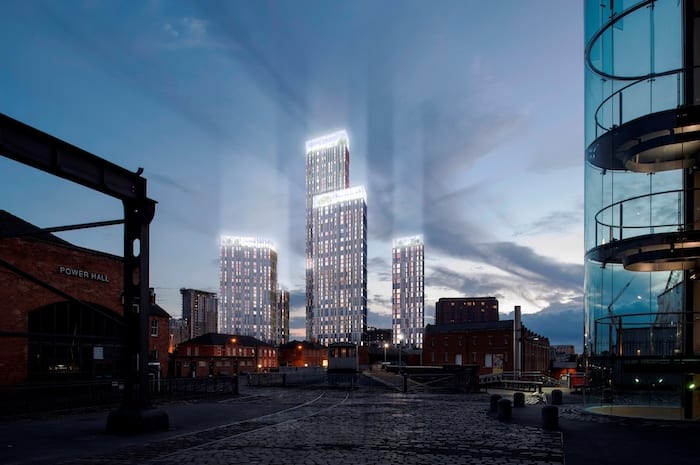 The Northern Quarter might have temporarily transformed into New York for the new Spider-Man spin-off Morbius recently, but there’s a more permanent slice of Manhattan in the making with Trinity Islands.

One of many skyscrapers in development across Manchester, the Trinity project on Water Street has grabbed people’s attention because one of its five towers is set to be the highest residential scheme in the north west, standing tall at 67 storeys high, when completed.

Within this ‘vertical village’ there will be nearly 1400 apartments, over 500 car parking and 2000 cycle spaces, flexible working opportunities, sky gardens and observation decks, along with a ground level high street comprised of farmer’s markets, shops, cafes, gyms, educational facilities and event areas.

There’s even a boat club planned so people can make use of direct access to the River Irwell. Unlike the anonymous living of the old high rises, the team behind Trinity is keen to create an urban village community, somewhere you’ll bump into your neighbours, and can use amenities right on your doorstep.

Greg Jones, associate director of Child Graddon Lewis, the company that’s designed the project, tells us about the idea’s foundations, the reaction they’ve received and how it meets the city’s growing needs. 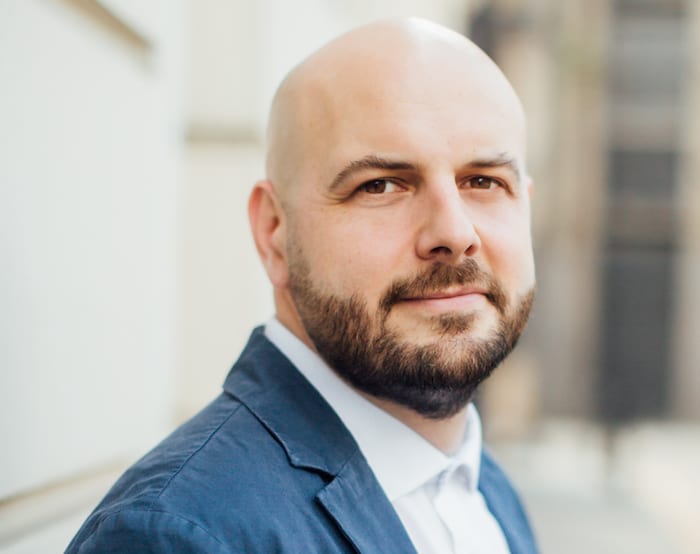 When did the Trinity Islands project start?

It’s a bit of a funny one because we entered a master planning competition for the ITV estate in 2013. We didn’t win but our idea caught fire and we were asked to do something similar as a mixed-use urban vertical village on this site.

It’s a rather hackneyed expression now but that’s what it is in, that it’s got schools and office and supermarkets and all the things people need to thrive in a relatively high-density environment.

That was 2015, a couple of years before planning consent was secured, which is the most difficult thing to achieve, particularly for large buildings, which is right and proper frankly.

We don’t want to repeat the mistakes of the past and go and lump in great big things all over the place, which are either in the wrong place or not the right use or not well-connected.

What are the advantages of building up rather than out in a city?

I’m a big supporter of urban density because I think the alternative is that we just smear out and I don’t want that.

We live on a green, lush island and I want it to stay that way. Also, I think sustainability-wise, we’re better cramming people together in urban bubbles, sharing resources more efficiently.

Now, that sounds like ‘stack ‘em high, build ‘em cheap’ kind of mentality but it doesn’t have to be that way. That’s what we’ve got wrong in the past.

High density doesn’t need to be unattractive. It should be done in a way that’s desirable, and that’s what Trinity Island pictures doing. 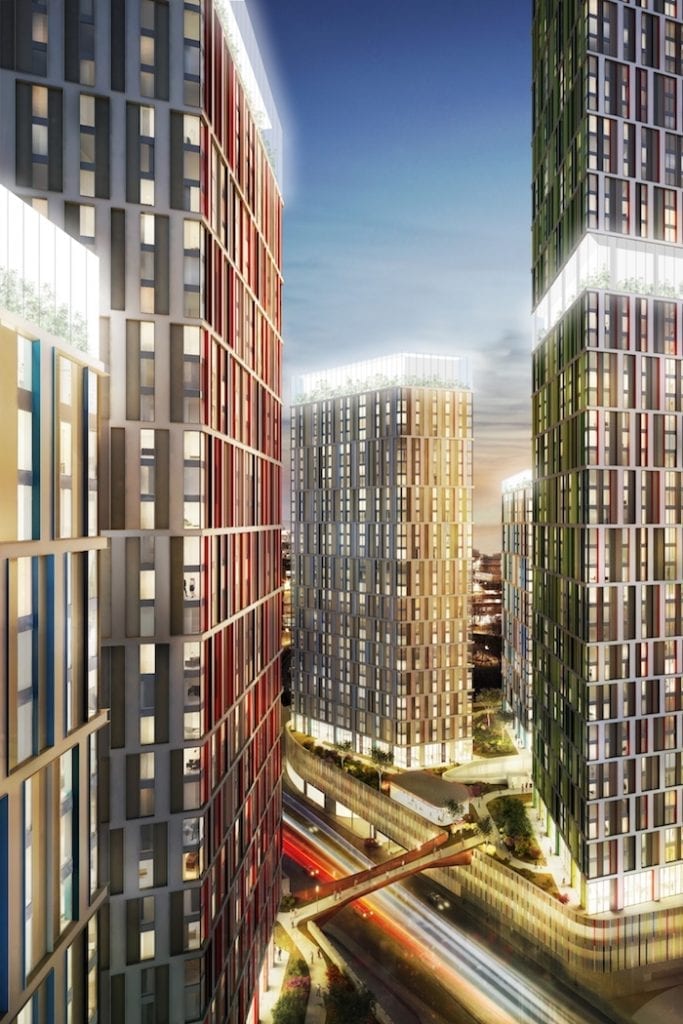 What were the key factors when designing Trinity?

One of the problems with high rise that we’ve seen in other parts of the world is that it becomes quite isolated, like living in a hotel.

You come out of your lift, spend about five seconds in the corridor before you put your key in the door and you’re into your private rooms. The likelihood of interacting with any of your neighbours in that sort of environment is almost negligible.

In Trinity Islands, that’s completely eradicated because the lift lobbies are communal and there are gardens with party facilities and shared accommodation and gyms and a high street and shops.

It’s in a village environment where people run into each other. We’ve provided for that and for a lot of people living on a relatively small piece of land.

What’s it been like developing this idea in Manchester?

I have to say it’s so different to working in other cities. You have a series of public consultations as you might imagine for a scheme of this size and if you did that in London or Birmingham or Newcastle, you would have a room full of people moaning.

They wouldn’t even be sure why they’re moaning. They accept there’s a housing crisis but it’s a bit like the nuclear power station and prisons and recycling centres, everyone accepts we need them really but just not near them.

But in Manchester it’s brilliant. No-one cares that’s it’s tall. Once it’s more than five or six stories it’s above your eyeline anyway. As long as you’re not overshadowing people obviously, [the response is] ‘Let’s have more people, more customers, more people sharing’.

But then to make that ground floor, that high street, sustainable, you need more people and the more people you have living and working there the better. That people are receptive to that as an idea in Manchester is incredible, and very unusual. 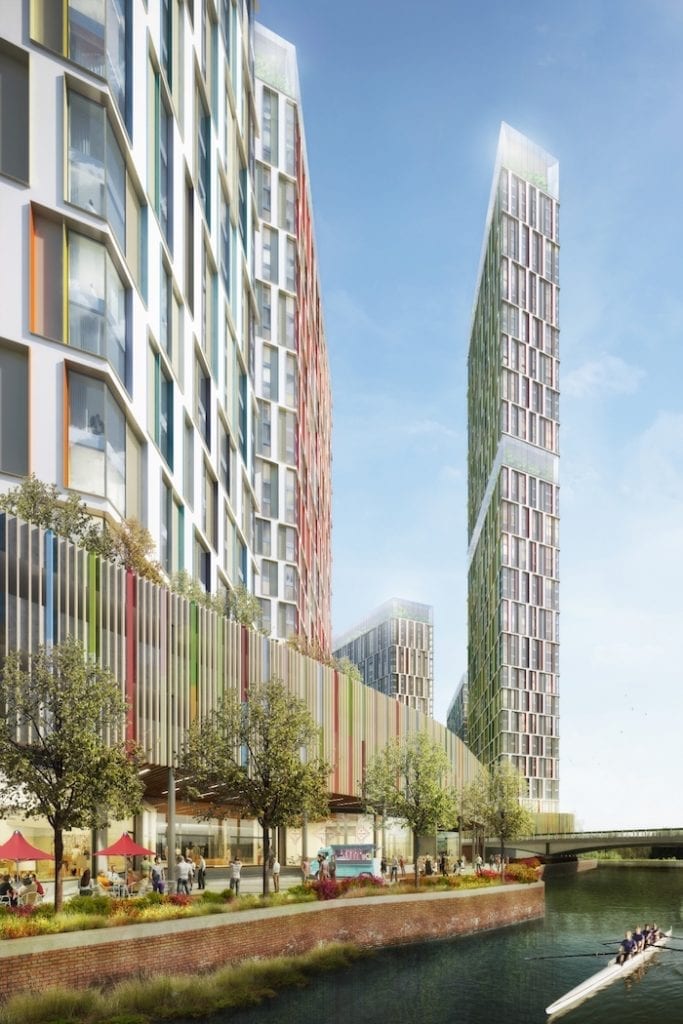 What’s the drive behind the city’s focus on residential schemes?

Not so long ago, people were moving away and that has been completely reversed in the last 20 years, the result of which is a demand for people to live and work and play in the city and that’s attracting a lot of inward investment.

Graduation retention rates are some of the best on the planet in terms of people coming for further education and then staying and working.

The nightlife’s fantastic; there’s MediaCity and all the infrastructure that goes along with that, and the success of Spinningfields is  bringing a genuine alternative into the city as a financial, insurance and legal headquarters.

It’s because of this, there’s a huge drive for residential [schemes] of various different sorts. I think it’s going to take 15, 20 years before we catch-up with where we need to be because there’s been a long-term undersupply.

What does it say about the city that so much is going on?

You don’t want a monoculture, which is what London’s Canary Wharf got wrong the first-time round, and we’re not seeing that with Manchester.

There’s a really nice mix (of projects), and what it’s saying to the rest of the word is we’re going to do it better.