Manchester’s Northern Quarter has been a hive of Hollywood activity this week – with new superhero movie Morbius starring Jared Leto and Matt Smith continuing to film.

And on Wednesday night we got our first glimpse of Doctor Who star Matt as he filmed his latest scenes as villain Loxias Crown in the movie.

Dale Street, Lizard Street and Back Piccadilly were transformed into the atmospheric back streets of Brooklyn for the latest night-time scenes, with a newspaper stand set up outside the Manchester headquarters of fashion brand Boohoo, American hot dog stalls and a cast and crew of hundreds milling around.

The movie explores the background of comic book Spiderman villain Dr Michael Morbius, who will be played by My So Called Life star Jared on screen, while other famous faces in the film include Adria Arjona as Martine Bancroft.

Jared has been spotted filming scenes around Little Lever Street and on Stevenson Square earlier this week, where producers had brought in a host of NYC yellow taxis, buses and American green street signs to transform the area from Manchester into Manhattan.

By Tuesday, action had moved to Tarriff Street and Dale Street where a stunt double was seen wired up high in the street for what looks set to be dramatic scenes of Morbius, the living vampire, flying through the streets of Manchester.

On Wednesday filming turned to the adjacent Paton Street, where the city’s vinyl store Clampdown Records was being used as the hub of activity.

Director Daniel Espinosa was also spotted on set last night, with the final day of filming expected to complete on Thursday in the city centre.

The film itself is scheduled for release in cinemas in July 2020.  And we can’t wait to see how Manchester will feature in it all. 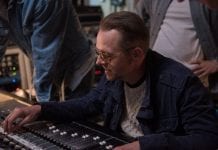