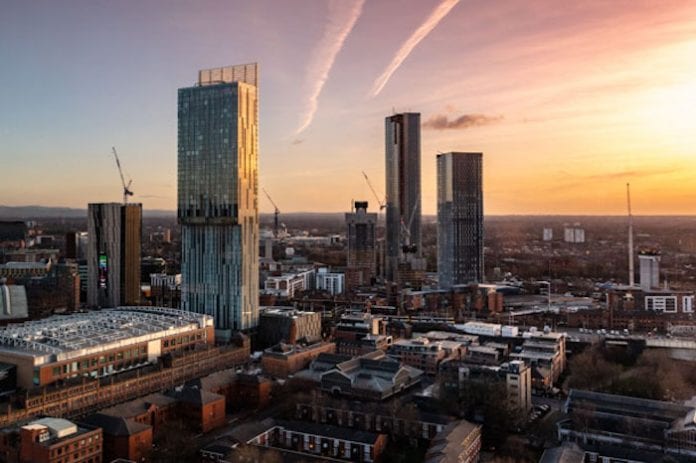 Manchester’s a boomtown. Just walking around, you can clearly see the money that’s being pumped into the city by the sheer amount of building work underway.

Get up high and you’re met with the site of dozens of tower cranes dotted across the horizon.

For a long time, the skyline was predominantly dominated by Victorian buildings, evoking a bygone age when Manchester was an international powerhouse.

During the 20th century, modern, glass structures began to crop up, notably City Tower, which was finished in 1965 and the Beetham Tower, which was completed in 2006. But in recent years, the city’s begun to morph into a mini Manhattan-of sorts. 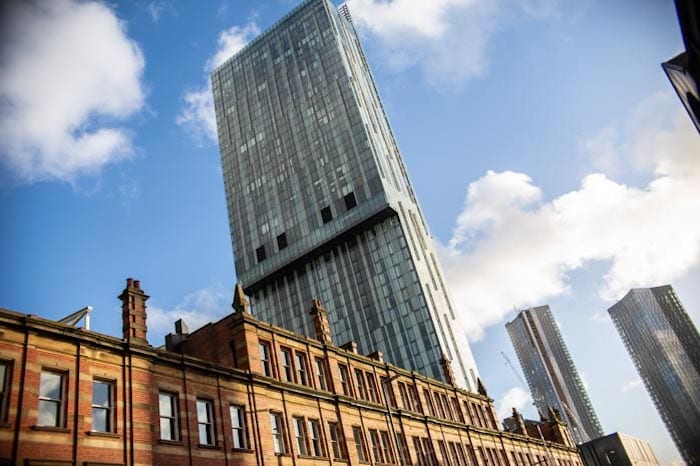 As residential, commercial, retail and leisure sectors continue to grow, students are choosing to stay on following graduation, companies are expanding in the north and a growing number of people are migrating to the city centre.

In turn, Manchester is moving up – both metaphorically and literally speaking.

“With an upsurge in demand comes an increase in destiny and that means further height,” says David Holt, architect and founder of Manchester-based practice 74.

He believes there’s nothing wrong with going tall, but certain perquisites should be met.

“But the quality of buildings and spaces is definitely improving as class leading developers are attracted to the city and understand the need to give something back that is above and beyond the norm.” 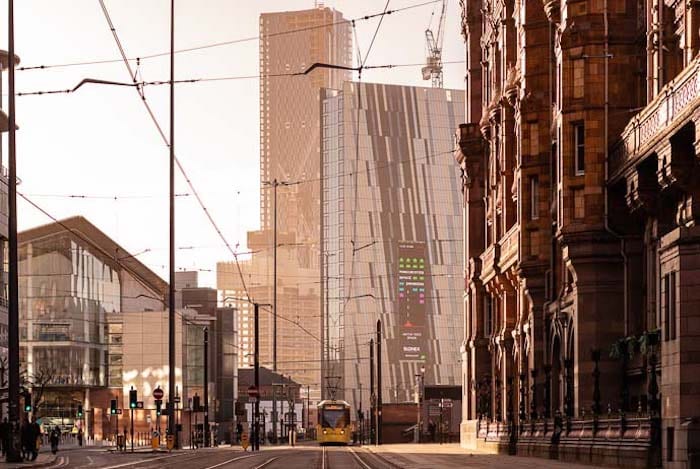 As it stands the tallest building in Manchester is Deansgate Square South Tower, part of a residential skyscraper cluster on the southern edge of the city centre. But this will be surpassed in the coming years by one of the five towers collectively called Trinity Islands, which have been approved for construction. When complete this will provide 1400 new homes.

“Manchester’s skyline is evident of a new age, an age of contemporary thought that is focused on the future, where there is a confidence that anything is possible. It’s quite incredible how the city continues to develop and improve but the city’s known for its ability to get stuck in and get things done,” notes David.

When the recession hit following the 2008 crash, the industry all but came to a grinding halt. It was only around 2012 that development began to creak into action once again and it’s those development plans that are now coming to fruition.

“Few cities have seen their skyline change as rapidly as Manchester’s in recent years, as successive regeneration projects have led to a collection of world-class residential and commercial developments springing up in the city,” comments Jonathan Stephens, MD of Surrenden Invest.

“The city is a hotbed of economic improvement, with investors keen to be a part of its success. At the same time, Manchester’s growing population and the growth of its business and academic communities are laying strong foundations for the future.” 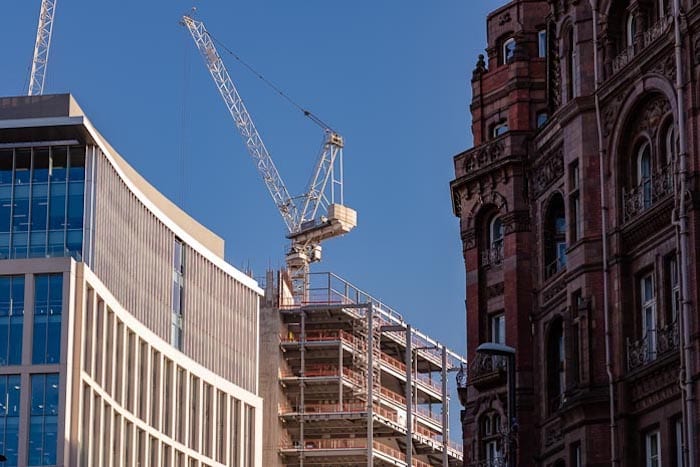 With many young professionals opting, or having, to rent instead of buy, residential buildings are key to Manchester’s evolving skyline.

But while the pace of building upwards work meets demand, it needs to be matched by the pace of infrastructure required to support it all.

“That ability to logistically get people in and out, with transport links and parking, and provide them with schools and hospitals and doctors surgeries and shops and leisure facilities,” explains Russ Bennett, director of Trident Building Consultancy.

“And if planners are going to give you planning permission for 50 stories above then they want you to do some urban regeneration as well, get the landscape right, make sure development sites are linked so there’s pedestrian and infrastructure linkage to developments sites. But Manchester’s a good example of having had the foresight to do this.”

It’s perhaps no surprise that word is swiftly getting out as to the benefits of buying in Manchester.

“A river view in London is £1500 a square foot but in Manchester it’s half that, which has made it more attractive for people,” says Russ.

“And I think there is less attraction for London now because cities like Manchester are great places to live, and people no longer need to head to London to be part of bigger industry projects. Plus, it’s more affordable up here and disposable income goes further too.” 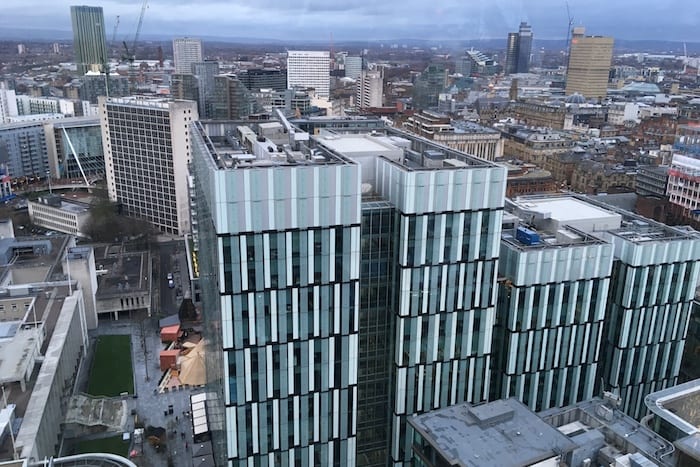 Adam Brady, director and head of the Manchester office at Henry Boot Developments, is just one of those who’s noticed the shift.

“We have people working for us that wouldn’t have ordinarily gone to university and then directly down to London but they’re seeing they can get a better quality of life and that there are really great opportunities,” he says.

Just as long as young professionals aren’t priced out of these city centre schemes as they have in London. There are fears Manchester could end up in a similar predicament with a rise in foreign investors.

“What you’ve had in London is it’s been a safe haven for money, so you’ve had Middle Eastern foreign money coming in and just acquiring property just as a wealth preservation,” says Adam.

“Whilst you have an element of foreign buyers buying into Manchester projects, I don’t think it’s anything like the same scale. I’m pretty optimistic that isn’t going to happen, but obviously it needs to be monitored going forward and I guess it’s the industry working together with politicians and councillors to make sure it doesn’t.” 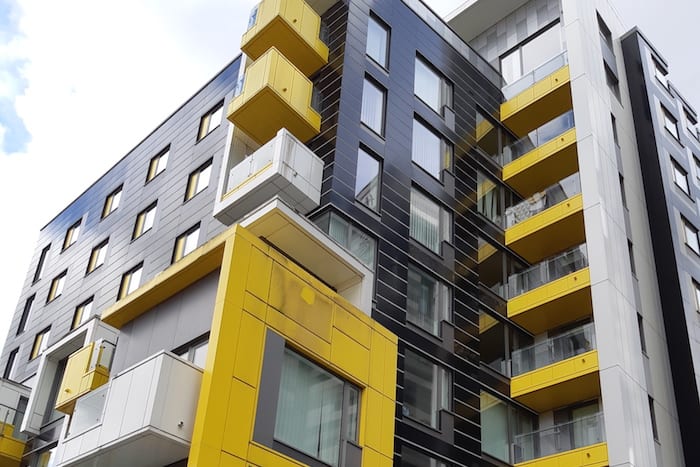 There has also been cause for concern that not enough is being done for low-income families.

“You can go just outside the city centre and there’s very affordable housing and quite a lot of that stock, so I think the City Council’s view has been we don’t need to make some provision for that within the city centre. However, it’s my understanding that view is changing politically,” says Adam.

Although there is only so much room to build on within Manchester’s city centre, there’s plenty space for development the further you move out of the city. Looking to the future, David Holt envisions a ring of high-rise communities around Manchester’s fringes.

“These areas will be well-connected, welcoming, self-sustaining, vibrant, diverse, inclusive and rich with life and activities. They will feed the city centre with an increased population, something that’s important for businesses and cities to succeed, but more importantly it will not change the character of what makes Manchester unique,” he says.

“But it’s fantastic to see that Manchester has got real ambition. It is thinking big.

“If Manchester wants to be truly ranked amongst the world’s greatest cities, it needs to have belief and conviction – two things Mancunians are well known for, thankfully.” 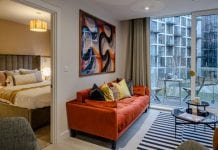 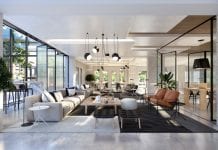 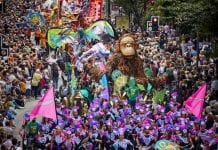