The MasterChef finalist swapping planes for pans at The Rivals restaurant 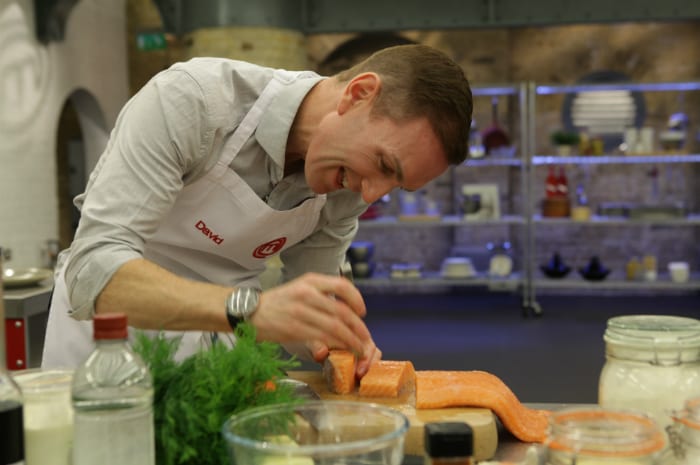 Having wowed both the judges and viewers with his stunning dishes on BBC’s MasterChef, Stockport-based finalist David Crichton is stepping into the kitchen at The Rivals restaurant at the Royal Exchange for one evening only.

Working closely with head chef Anna Fysh and the team at The Rivals he has designed a unique six-course tasting menu inspired by the dishes that led him to a coveted place in the final three on the hit show.

I caught up with David and Anna at The Rivals to ask about their culinary collaboration, their thoughts on Manchester’s dining scene, and life after MasterChef.

David has been a commercial airline pilot since he was 19 with over 10,000 flying hours under his belt. Originally from Newcastle, he moved to Didsbury in 2004 and has spent the past few years living in Bramhall.

“I fell in love with flying when I was about two,” he says. “Everything is big when you’re a two-year-old. But as you grow older, planes never get small. We used to live on the flight path in Newcastle and that’s always what I wanted to do.”

Cooking was never a career plan for David, but it is something he has always enjoyed from a young age.

“I never wanted to be a chef. But I’ve cooked all my life. I just love it. I rarely cook the same thing twice. Someone said to me a few years ago that maybe I like to cook because it’s the other side of my brain, the arty side, working. A lot of pilots actually have an arty side to them.”

While David enjoyed cooking for his family at home, he was keen to have a go at MasterChef to get some feedback from the professionals.

“I’ve always watched MasterChef, and you never think you’re that good,” he says. “I just wanted to go on and see how good I was, and not embarrass myself. Then once I got to the finals I got really competitive.”

MasterChef fans will recognise some of the dishes from David’s time on the show when he comes to The Rivals on 27th June.

“Pretty much all the final dishes are there,” he says. “My favourite pudding, the deconstructed apple crumble, is there. The beetroot sorbet, too, which divided people on TV. I’ve cooked it at events since, and people always tell me that they love it even though they didn’t think they really liked beetroot. Every dish is quite personal to me.”

The collaboration is equally exciting for Anna and her team at The Rivals.

“It’s the first tasting menu like this we’ve done here,” she says. “But we hope to do more collaborations in future. It’s always nice to do something different.”

Anna and David are both fans of dining out in Manchester, and believe that its restaurant scene is increasingly impressive – and not just the city centre. “Stockport is very much ‘watch this space’,” says Anna.

The local dining scene is ever-changing, Anna believes. “There are lots of interesting things popping up. I love Manchester, I’ve lived here a long time. Dining out is so different than it was 20 years ago. People eat out all the time now. People appreciate good food, and Manchester is definitely moving in the right direction.”

The head chef’s favourite restaurants include Mr Cooper’s in The Midland, and The Rabbit in the Moon, which she describes as “a real journey, flavour-wise.”

“There are some brilliant places to eat,” David agrees. “The French is my favourite. It’s the most beautiful place, and you’re treated like a king. It’s a proper sense of occasion, and the culinary ability is superb. Hispi and The Refuge are my other two favourites.”

As a pilot, David is lucky enough to travel the world. Does he find culinary inspiration on his journeys?

“We don’t get much downtime,” he says. “Quite often you fly one day, spend the night and fly back the next day. You generally have to go off the beaten track for the interesting food, and a lot of the places we fly to are hotel resorts. There is some local food, but it mainly caters for tourists.

“You do get influenced, though. It’s good to travel and see different ingredients and techniques.”

David learnt a lot from MasterChef, though he admits the experience was nerve-wracking.

“On the show, when they say you’ve got an hour, you really do have an hour,” he recalls. “And that includes chatting on camera, too. When Gregg comes over to interview you, you try and do something simple, just peeling fruit or something. Nothing too complicated with a knife while you’re being distracted.”

The amateur cook found his first experience of a professional kitchen daunting, too.

“I remember in one kitchen they were barking orders at you, but that’s not necessarily the order you need to cook the dishes in,” he says. “I thought, ‘just tell me how many you want, and I’ll cook them’. Communication madness. I actually said to them, if I ran my planes like this, we would all be dead.”

David is looking forward to swapping planes for pans in The Rivals’ kitchen for his upcoming collaboration. And unlike Gregg Wallace and John Torode, diners can rest assured that the dishes will be served at the correct temperature.

“On MasterChef, what the judges eat, it’s all cold,” David reveals. “They stop the clock and all the contestants go out. Then they take the photography stills of each dish. That’s a minimum of half an hour. Then you all come back in and take your dishes up to be judged.

“The temperature of the food is never actually mentioned on the show. You’ll notice that if there is an ice cream it’s always on a separate little plate so you can get it from the freezer before you go up.”

But if any budding chefs are wondering whether to try their hand at MasterChef, David is unreservedly positive.

“I would recommend MasterChef to anybody,” he says. “It really can change your life. The whole team is brilliant, everyone is such a massive foodie. It’s the most nerve-wracking thing you’ll ever do. But it’s so worth it.”

The MasterChef Kitchen Takeover at The Rivals takes place on Wednesday 27th June. The six-course menu costs £55, with a matching wine flight £45.