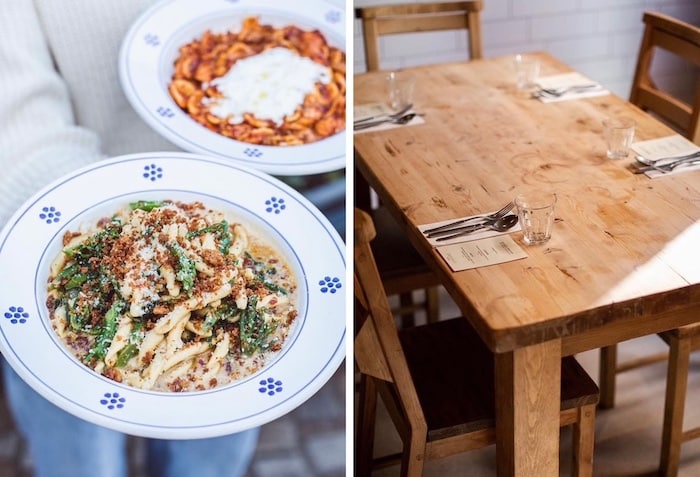 The region’s first southern Italian pasta kitchen, Sugo Pasta Kitchen has already developed a loyal following at its branches in Altrincham and Ancoats.

Soon, M33 will get a taste of the action, with the opening of a new Sugo restaurant next week in Sale.

The independent restaurant, run by brothers Mike and Alex De Martiis, is famous for its fresh Pugliese pasta by the De Leonardis family in Altamura, Puglia.

Signature dishes including the House Sugo – orecchiette pasta with a ragu made with meltingly tender rich eight-hour beef shin, pork shoulder and nduja.

Starters feature Italian favourites such as lamb and pecorino meatballs with pea and mint ragu and ricotta, bruschetta ‘Pugliese’, and calamari fritti with anchovy aioli.

There is also a selection of vegan and gluten free dishes, as well as a short but considered list of regional Italian wines too.

The Sale restaurant has been made possible via a crowdfunding project offering gift vouchers matching donations (essentially meaning customers were pre-paying for future meals in advance), as Sugo explained just before Christmas that the project in total cost £275k, and they had managed to cover £190k.

Sugo then smashed its £85k target for a Kickstarter campaign to help fund the latest restaurant opening in just eight days, reaching over £104k.

“Since we opened our original restaurant in Altrincham in 2015 and then Ancoats in 2018, we’ve often been asked to open in Sale,” they said at the time.

“This restaurant has the potential to be our best yet.”

Soon, the people of Sale will get to try it for themselves.