The award-winning play, All I See Is You, is returning to the north west at the end of May, and Ciaran Griffiths, who reprises his role of Bobby in the two-hander, couldn’t be happier.

“It was a brand-new play that Katherine Smith had written but we only had a short run at The Octagon Studio in Bolton last year. From the reaction we got from there, I knew we weren’t finished with it,” says the former Shameless star who lives in Moss Side.

The love story, which makes its debut at Hope Mill Theatre on Pollard Street, is set in 1967 and was written in response to the 50th anniversary of the partial decriminalisation of homosexuality in the UK.

“I was ignorant to the lengths people would go to try and hide their sexuality. One guy we spoke to at a Q&A was in his sixties and had only just come out to his family,” says Ciaran.

“Katherine had done so much research, the play’s truthful and honest. I think that’s why people liked it so much.” 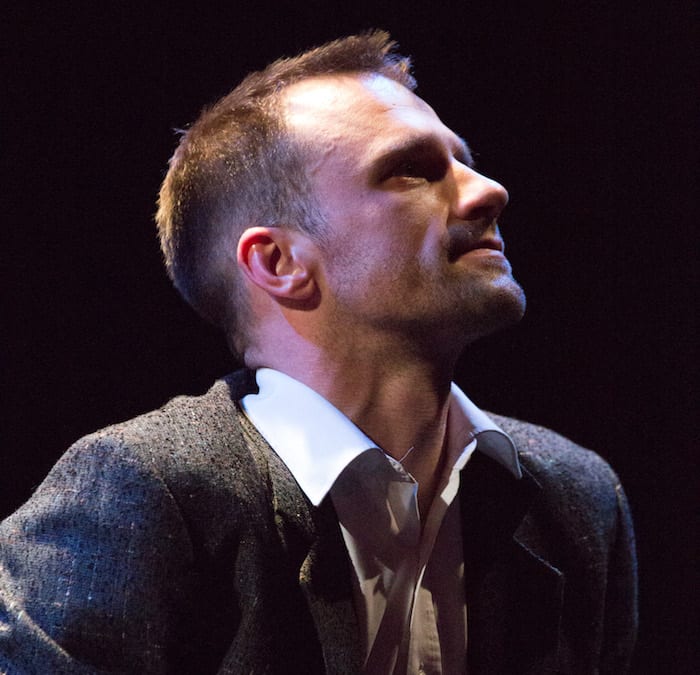 The title is in homage to the late singer Dusty Springfield, who hid her relationships with women, and Sixties pop classics are interspersed throughout the play.

“The soundtrack’s brilliant. There’s a little bit of dancing involved. It’s not a musical by any means but we have a bit of a jive,” says Ciaran who describes Bobby as “someone you can’t keep down”.

“He’s really outgoing, loves his family and his job on Woolies’ record counter.

“After a thunderbolt meeting with Ralph (Christian Edwards), Bobby can’t suppress who he is any longer so just throws himself into the Canal Street scene risking blackmail and arrest. But Ralph comes from a Christian family and is training to be a teacher. They love each other but Ralph struggles with his sexuality a lot more and sets out to ‘cure’ himself.

“The play makes you laugh, it makes you cry, but ultimately celebrates the courage it took for gay people to overcome prejudice to be their true selves.” 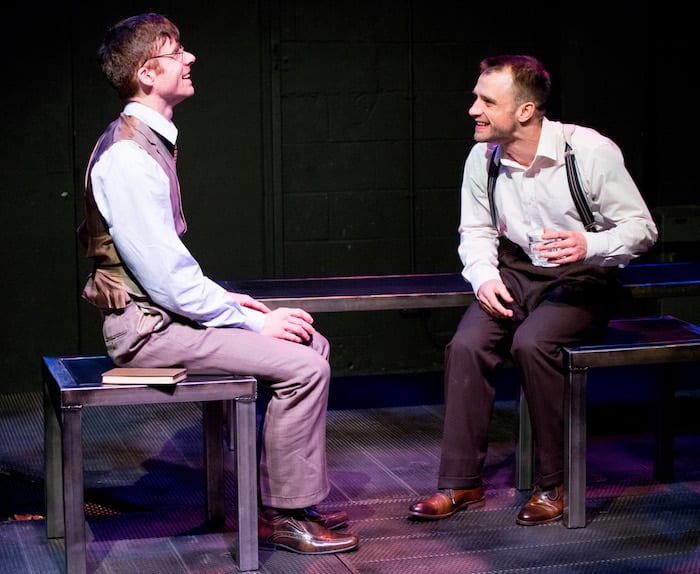 As it’s only Ciaran and Christian on stage for the duration of the play, “you have to be able to trust each other,” says Ciaran.

“I get a real buzz from doing theatre. Beforehand I always wonder why I’m doing it to myself but when you come off stage you feel invincible. It’s the adrenalin. It feels great to get out of your comfort zone, and it’s good for your confidence because there’s nowhere to hide.”

Although he’s had notable TV roles, it’s the theatre where it all started for Ciaran.

“I used to watch Laurel and Hardy with my grandad and knew all the words, and I’d get my grandad and mum to sit in the kitchen while I performed. I was always attention seeking. Even at school I’d mimic people. It was my mum who suggested I go and do these theatre workshops.”

At 16, he attended the Oldham Theatre Workshop and later workshops in Salford and was subsequently cast in There’s Only One Jimmy Grimble starring Robert Carlyle. 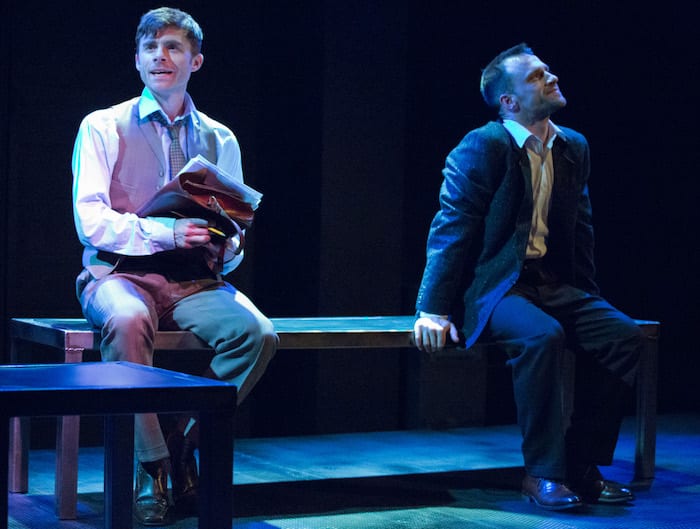 “They didn’t want kids from drama school, just normal kids from workshops, and I ended up getting a part,” says Ciaran. “I was a big fan of Trainspotting and did Begbie impressions and everything. But Carlyle was nice, really good craic.”

It was the producer on that film that got him an agent in London, and not long after he landed the role of PC Gary Best in The Bill where he stayed for five years.

“I’d literally just turned 18 when I got The Bill, so I’d never lived on my own. It was a bit scary but lots of people took me under their wing. I was getting a good wage so having the time of my life really, but a lot of the cast gave me good advice like don’t p**s the money up the wall and get a house, so I did that.”

He went from The Bill to Jimmy McGovern’s The Street and then Shameless where he played Micky Maguire. “That character was so larger than life it was tiring at times, but I knew, growing up in inner city Manchester, characters like that.”

His stint on Shameless “were the best years of my” although he adds “you don’t realise at the time, it’s only when you look back”.

“I was so lucky to be involved and working with some really good actors as well, like David Threlfall and Sean Gilder, proper heavyweights, so you learn so much. And we had a great time doing it. All the cast were sound, I met friends for life.

“I remember it a very happy place to be working but it was crazy. One time they had to rewrite a script and got given a monologue in the morning and you’d do the best with the time you’d got but it was exciting at the same time.” 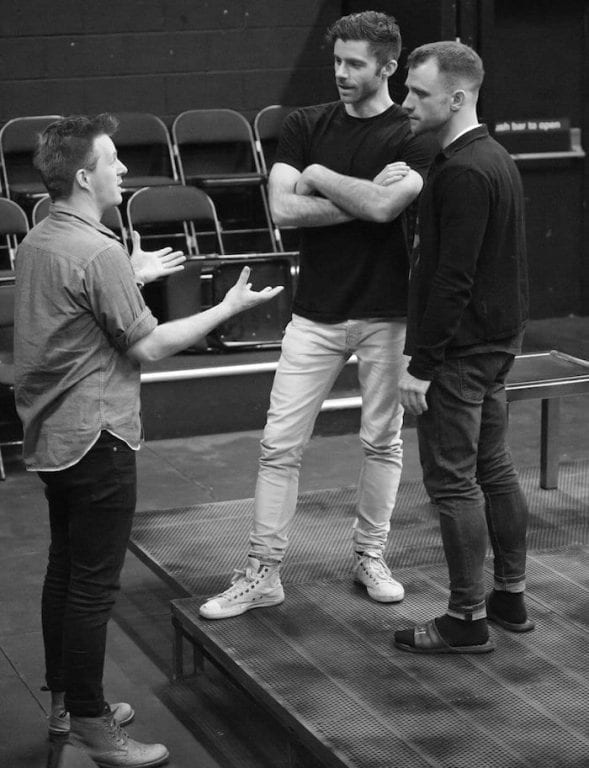 More recently he’s appeared in The Mill, Vera, The Bay and Shakespeare & Hathaway, as well as on stage, but he admits there have been testing times over the years.

“After Shameless, I was very conscious I couldn’t do another character like that for a good while. I wanted to push away from that to show I’m not a one-trick pony,” says Ciaran.

“I was very fortunate early on so it’s only when I left Shameless that it hit me how tough it was to be an actor when you’re doing auditions and being rejected because I was so used to working.

“2016 and 1017 were really, quiet years work-wise. I’d gone from constantly working to thinking I’m going to have to change careers. So, it does get that scary and then something turns up.”

He admits he’s had a love, hate relationship with the audition process throughout his career.

“I’m 35 now. When I first started out, I used to really enjoy going to auditions, and then went through a phase where I was really nervous about it. Don’t know whether it was age or because I’d been in Shameless for so long that you think you can’t do anything else. Whereas now, I’m back to enjoying myself again,” says Ciaran.

“You just have to remember why you got into it, because you enjoy it. Now, I’ll do my homework, go to the audition and do my best and then try and forget about it and anything else is a bonus.”

He doesn’t know what’s next following the end of the All I See Is You tour, and that’s the way he likes it, for now at least.

“Certainly, when I have kids I might have to get into a soap or something, but at the moment, I only have to look after myself and don’t want to do anything long-term. I want to be able to see an end date and do as many different parts as I can.”

All I See Is You runs at Hope Mill Theatre from 27th May until 1st June.