Review: Identical at the Lowry will have you seeing double 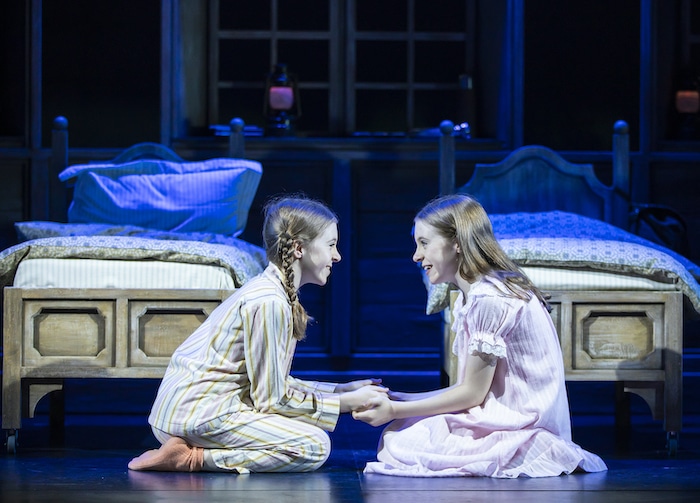 Blood Brothers explores the incredible bond between two twin boys, separated at birth and how they become friends, even though they are unaware that they are related. This hugely successful musical plays out against a backdrop of poverty and money lenders.

Identical is based on Eric Kästner’s book The Parent Trap which is widely recognised on film and focuses on privileged twins separated at birth. One lives with mum and one with dad. The two girls are reunited at summer camp, aged 10, and once they realise they are sisters – they decide to swap places to see how the other half lives.

While the film versions made use of two Hayley Mills and two Lindsay Lohans, here we have real twins playing the roles on stage, which adds authenticity, mischief and a genuine connection to the material. Lisa and Lottie have completely different tastes. Swap places and you have funny situations which are very endearing to watch.

Lisa’s father (played with real charm by James Darch) is a composer and when his daughter returns from summer camp, able to play the piano – he is shocked but equally thrilled. Lottie’s mother (played with lust for life by Emily Tierney) is journalist who loves the great outdoors. When her daughter returns from summer camp with a love of walking and mountain air, she does not suspect a thing, simply putting it down to a summer of new found discovery.

Enter Miss Gerlach, an under written character who exists simply to provide a plot complication. This talented ballet dancer does not have a natural affinity with kids and when her engagement to Lisa’s father is announced, the girls plot to split them up. Gabrielle Lewis-Dobson has some brilliant lines and makes far more of this role than is on the page. But the character traits feel dated as she is presented as vampish, swishing onto the stage like a low rent Cruella De Vil, yet in reality she is navigating the idea of taking on a blended family which could be explored with more subtlety.

The first 15 minutes of this new musical feel a bit awkward and nothing grabs you instantly – the song ‘In the Summer’ is not a great opener – it is just nice and sweet, nothing more. And Robert Jones set feels too reliant on Douglas O’Connell’s video designs and therefore feels a bit flat.

Then something magical does start to happen as the story evolves. You find yourself smiling as the songs start to have more hooks to pull you in and the performances are really engaging. As for the set and video designs, they begin to blend beautifully and you are transported to Vienna and Munich as each twin navigates their new life. There is both depth on breadth here.

I loved most of Styles and Drew’s songs and music including ‘You’re My Sister’, ‘We Were Young’ and ‘What He Doesn’t Need Which’ reminded me of ‘I Know Him So Well’ but from the perspective of a daughter and a fiancé; delivered as a battle. There is great balance of light and shade here.

There are many subplots fighting for your attention, including a romance between Roza the housekeeper and the family doctor. But these feel a bit rushed, whereas other parts of this musical feel drawn out. There is much to enjoy and savour but at three hours in length, it could afford to lose at least 30 minutes. Streamlining it would work wonders because the central storyline and lead characters are well drawn, and it does work well as a musical.

Trevor Nunn’s new musical Identical is sweet, funny, old fashioned with modern touches and anchored by the assured performances of Kyla and Nicole Fox who both avoid being cutesy. They are both wonderful to watch; seeing double has never been so much fun.

Identical is at the Lowry until 3rd September and tickets can be booked here.