It’s been quite a year for Manchester’s bar and restaurant scene – and we’re still only in August.

Having had a couple of months off dining out, we wouldn’t blame you for feeling a little out of the loop with new openings in and around the city. We’ve all been pretty busy catching up with old favourites following a few months of forced closure, after all.

Still, there have been some great new additions to the city and we wouldn’t want you to miss out. Here are some of the new Manchester openings you might’ve missed.

Already a popular fixture down in Chorlton, Peck n Yard’s fried chicken now has a second home on Great Ancoats Street. Served up a pan Asian twist, it’s well worth a try for their range of sauces alone (there’s at least eleven to choose from and they’re all amazing). Think chicken and veggie combo boxes, bao buns, burgers, and loaded fries. Hungry yet? Us too.

Another Heart To Feed (Northern Quarter)

Another South Manchester eatery that’s ventured into town, Another Heart To Feed first made its name on Burton Road dishing up colourful, Melbourne-inspired brunch plates. Arguably the home of the best avocado on toast in the city (yes it might be a bit old hat now, but their version with beetroot hummus is still a must-try), you’ll also find some great natural wines, fresh coffee, juices, beers and cocktails here too.

A traditional Japanese dessert bar, Tsjuri has been brewing up its matcha delights in various forms since 1860. Already established in London, head to the new Faulkner street side to devour a range of soft-serve matcha sundaes, ice blends, bubble tea, lattes, shakes, wagashi (Japanese confectionery), yuzu floats, puddings and chocolate tarts with flavours like houjicha, black sesame and, yep, matcha.

New to Failsworth, Lazy Leo’s Corner Slice Pizza specialise in the Detroit style – something we haven’t seen in Manchester before. These rectangular deep-dish pizzas boast a thick, crispy, chewy crust with the cheese and tomato sauce layered on top of the other toppings. Great for veggies and vegans too, enjoy with a side of waffle fries and finish off with a cheeky cinnamon sugar donut.

Born during the lockdown, New Wave Ramen is the brainchild of serious noodle suppliers turned ramen makers. New to the food hall at Mackie Mayor, they’ve turned ramen making into a science. Priding themselves on using a blend of fine flours to create the perfect noodles for each dish (including croissant flour in their Hakata noodle), there might be a lot of ramen competition out there right now but these are well worth a look-in.

Offering a modern take on traditional Vietnamese cuisine, we think it’s worth visiting this new Chinatown spot for the lobster pho alone (but beware, it’s currently only available on Sundays with a limit of just 20 bowls). You’ll also find Vietnamese tacos here, mouthwatering bahn mi and homemade peach iced tea – not to mention a host of rice, noodle and salad options.

Another top spot for lovers of bahn mi, this Oxford Road cafe is probably more of a lunch pit stop than a sit-down diner (unlike Pho Cue, above). Aside from the sandwiches, you’ll also find dishes like grilled Vietnamese pork and crab meatloaf with rice, vermicelli tomato soup and squishy stuffed bao buns. Thank us later.

This neighbourhood bar, due to open pre-lockdown, has been quite a hit with the locals of Davenport. Serving up an all-vegan wine range alongside beers from local breweries like Seven Brothers and Bollington Brewery, it’s a great little spot that’s dog-friendly, too.

This new addition is upping the ante for local veggies and vegans with a fine selection of paella, sandwiches, quiche, cake, curry and ice creams. On the drinks side, find CBD-infused (and normal) coffees alongside a selection of wines and beers.

Specialising in handmade pasta and dumplings, The Sparrows have been on our radar for a little while now. During lockdown they moved into their new home in the Green Quarter, setting up shop serving their signature spätzle alongside handmade gnocchi, ravioli, pierogi and pelimeni. Make sure to try some of their incredible sake range when you visit, too.

A post shared by Escape to Freight Island (@escapetofreightisland) on Aug 3, 2020 at 4:57am PDT

Newly opened in Stretford Mall just before the lockdown, this neighbourhood bar and restaurant didn’t have the easiest launch but we hear it’s well worth a visit. Lunchtime fare focuses on sandwiches and burgers, home-made falafels, arancini and hummus – and there’s a hearty breakfast menu, too.

Launching on the cusp of the national lockdown, Gooey managed to be the one place attracting queues whilst everyone else was almost deserted. They went on to absolutely smash it with a delivery service, before opening up a cookie and donut kiosk inside Ducie Street Warehouse. Baked on-site daily, these sweet treats are definitely worth the hype.

This is the third site for award-winning beer shop The Epicurean, which opened its first site in West Didsbury back in 2014. With a second in Heaton Moor and now a third on Manchester Road, this craft beer micro-chain boasts the most varied range of UK and global craft beers. 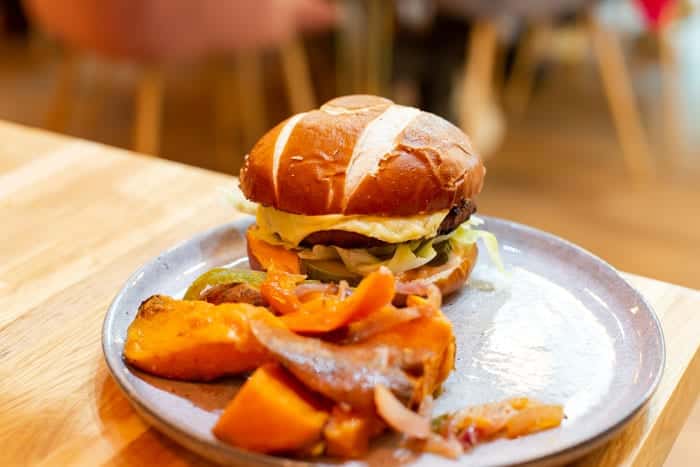 Complete with a sun terrace and super cute private dining greenhouse pods, this Media City opening marks the third site for casual vegan diner Vertigo. Recently named as one of the top 20 vegan restaurants in the UK by The Times, expect to find all the usual favourites here alongside a new ‘grab and go’ offering with chia pudding pots, rainbow salad and falafel bowls.