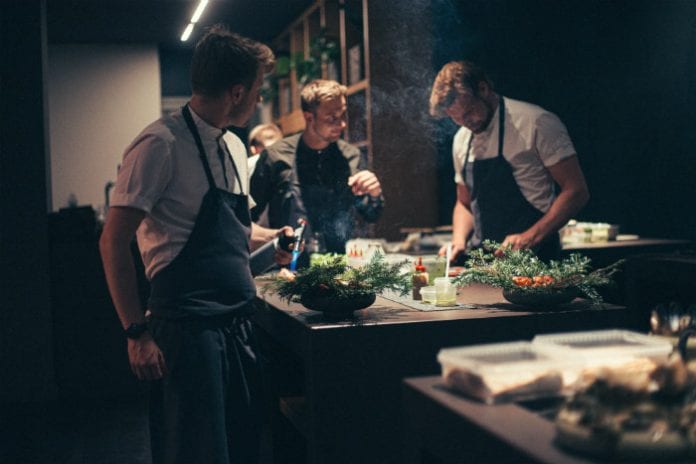 Ancoats restaurant Mana, which was last year awarded the city’s first Michelin star in over 40 years, opened its doors again on 4th July.

There are a few changes to incorporate new safety measures – the restaurant is no longer using its lounge area, the wine list is digital, and you get to use the most elegant hand sanitiser we’ve seen yet, like a little perfume bottle on the front desk – but the restaurant makes it all look easy.

The tables were already spaced well apart in light, airy Mana, and though chef Simon Martin says there have been a few changes to the menu so that staff spend less time at your table, you would never guess it.

It’s better than ever. 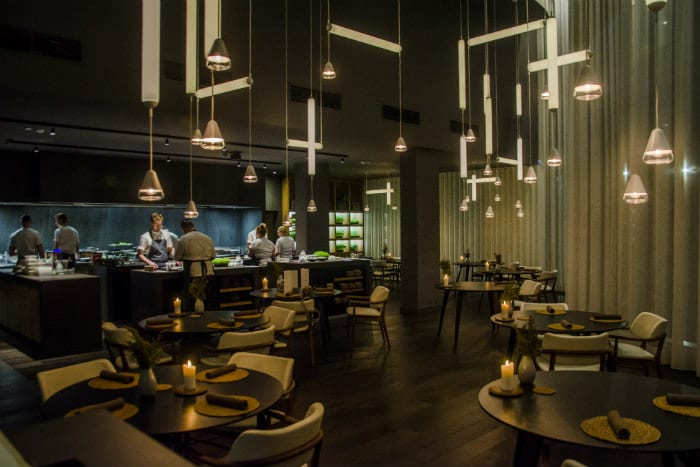 We start our eight-course set lunch (£65) with a couple of snacks: first up, a rich cup of roast chicken broth with a roasted hazelnut oil that they press themselves, infused with aromatic lemon thyme and sage.

A mini platter of charcuterie includes marbled pork coppa, beef bresaola and fennel salami, followed by grilled baby cucumbers with juniper cultured cream – and seasoned with a paste made from wood ants.

It’s salty and crunchy and delicious. Always expect the unexpected at Mana. 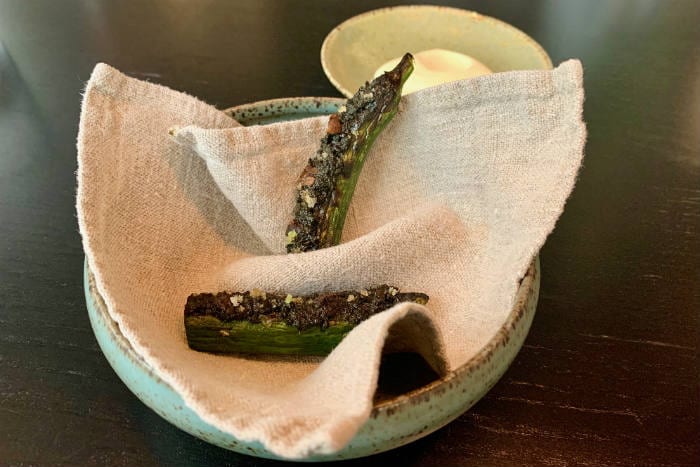 We watch the chefs working seamlessly, on full view in the open kitchen. It’s captivating, like watching a culinary ballet.

The lunch menu itself starts with freshly shucked oysters from the cool, pure waters of Lindisfarne, a tidal island off the northeast coast of England, showcasing the best fresh seafood our country has to offer.

They’re dressed with vivid green English wasabi and lovage, with a kick of sinus-clearing heat which readies the palate for the full tasting menu. 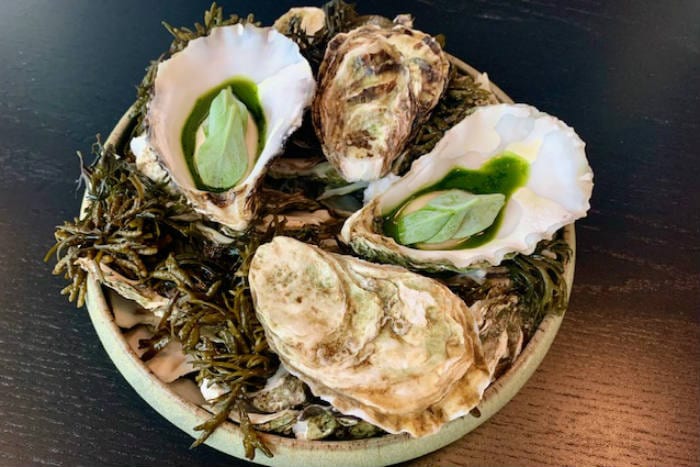 And it’s more seafood, this time juicy Scottish langoustine with cured egg yolks and spruce, served on a spruce skewer that’s been set on fire. It smells incredible. We’re advised to pick it up carefully, and eat it in one go.

One of our favourite dishes from previous visits to Mana has been the eel – and now it’s back, and it’s the best version yet.

The aged eel is marinated in blueberry vinegar, grilled over high quality Japanese white charcoal binchotan at a fiercely hot temperature, and glazed with roasted yeast. It’s tender and intensely savoury, and would without doubt convert anyone who may be sceptical into a die-hard eel fan.

Bonus points for the presentation making it resemble a tiny Dalek. 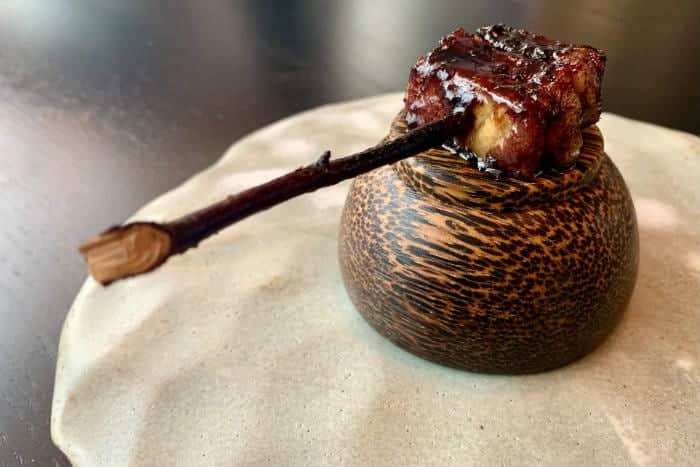 The journey into the main courses starts with a caramelised scallop chawanmushi, which is like a savoury steamed egg custard.

It’s typically eaten for breakfast in Japan, we’re told, and Mana’s refined version includes the freshest of scallops, with airy Doddington cheese crackers on the side. 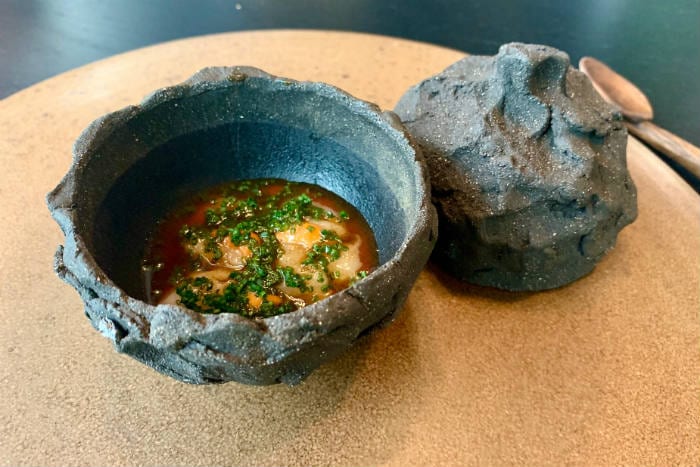 The rye sourdough, crisp and chewy, is made in-house and served warm, while the handmade cultured butter from Shropshire is so good all you can do is grin.

But the next course is my dish of the year so far – and it will be a hard one to beat.

Salt aged duck, artichokes and bread sauce sounds so simple, but of course there’s much more to it than that. 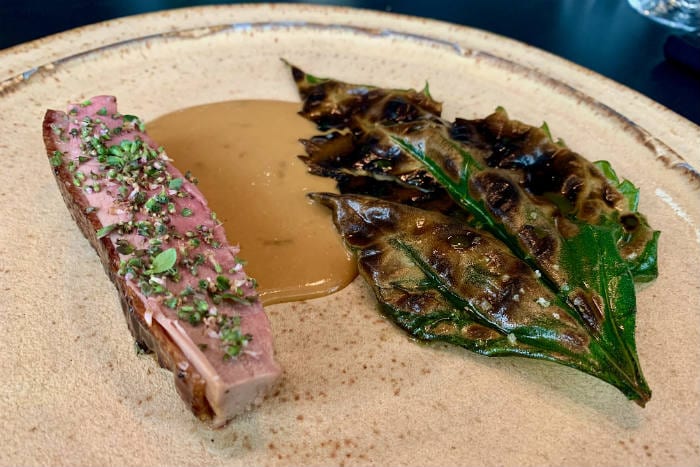 The Goosnargh duck has been salt aged for three months so it’s full of intense flavour, says Simon, then it’s cooked by being hung over the barbecue for two hours so there’s no direct heat from the grill.

The tender pink meat is served with two artichoke preparations: a puree made from the root, and the leaf.

“It’s essentially bread sauce,” says Simon about the ambrosial sauce he pours alongside, but it’s much more refined than that. The whole dish is just jaw-droppingly perfect. 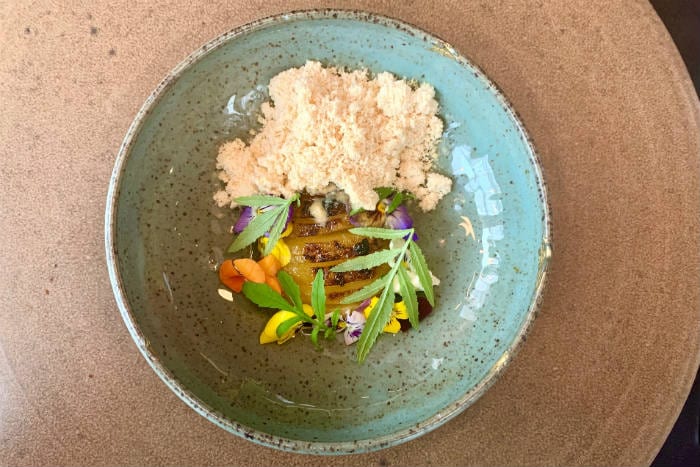 And the first of the puddings is a cracker, too: barbecued peaches with blossom honey and “all the flowers of July”.

It’s pretty, of course, but it’s also complex and layered and delightfully sweet. The frozen custard is a revelation.

Christmas has come early in Manchester. 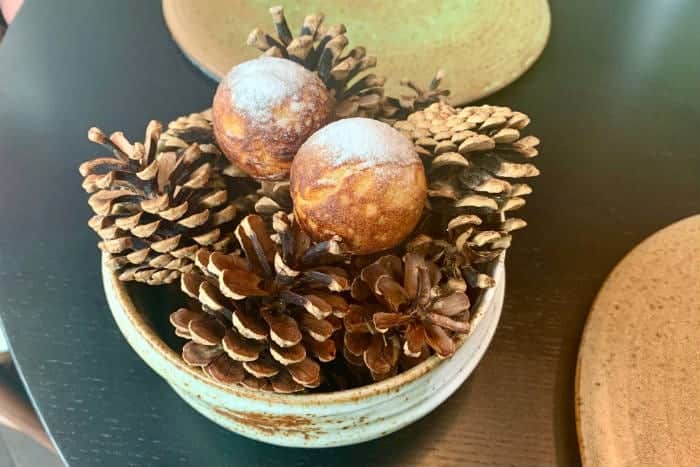 It’s an extraordinary menu, full of confidence and stunningly executed.

When we interviewed chef Simon Martin back in October the day after he was awarded the Michelin star, he was already working towards the next goal.

“As of tomorrow, we’re pushing for two stars,” he said.

“We’re going for it. We know what we need to do to move forwards. We’ve grown so much over the last year. I really want it and the team do too.”

If anyone can, Mana can. The skill on show in this kitchen is evident in every mouthful.

If you’re a fan of fine dining, you’ll be delighted. If you don’t think fine dining is for you, this is the place to change your mind.

Get a booking if you can – you won’t regret it. 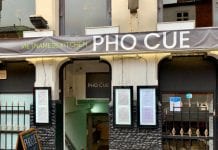 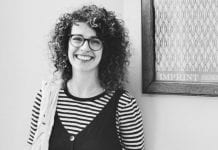