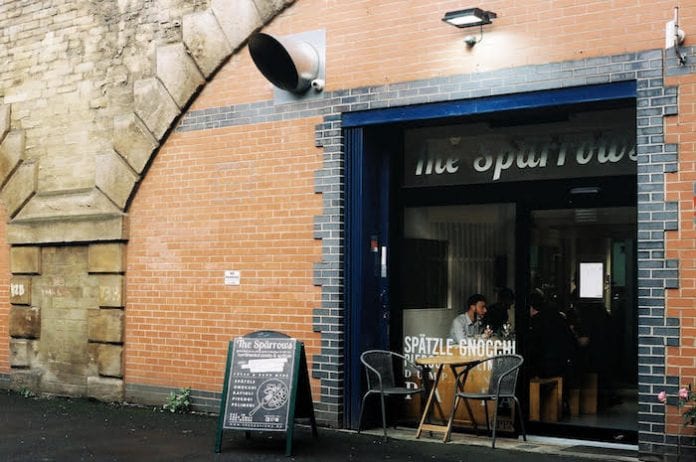 Venture far enough through the Manchester’s ‘medieval quarter’ and you’ll uncover the most wonderful continental pasta restaurant concealed behind scaffolding and roadworks.

Tucked into a tiny converted railway arch, it seats just 12 diners at a time and is adorably compact, offering the very best sort of communal dining.

No one here cares about your conversation, they’re too busy revelling at the plates in front of them.

To our embarrassment, we’ve not booked – a revelation that’s met with some good-natured tutting on our arrival. Luckily for us, it’s just gone 5pm and they squeeze us in.

The Sparrows, it quickly transpires, is just the sort of place we don’t want to tell anyone about for fear of ‘ruining’ it. But it’s just too good not to.

For the past week, our reply to every courteous well-wisher’s “how are you” has been: “We had the most wonderful meal last week…”

First intended for use by neighbouring sushi hot-spot Umezushi as a prep kitchen and – potentially – a deli, The Sparrows only became the cosy carb shrine we see today thanks to Polish-born sake supplier Kasia Hitchcock.

With her chef partner Franco Concli at the helm cooking up dishes that celebrate his Tyrolean heritage, house specialities include spätzle, a rustic fresh egg pasta from which the restaurant takes its name, and a selection of classic European dumplings like Polish pierogis, Russian pelimenis, Italian ravioli and gnocchi.

On the drinks front, they have a small selection of tasty Swiss and Japanese beers  alongside a short list of organic and biodynamic wines (the majority of which hail from Austria and Germany) and the aforementioned Japanese sake.

All the pasta is fresh cut and comes with a choice of traditional regional sauces, each with its own recommended partner.

We both opt for the Käse spätzle, a solid house favourite. Traditionally made by scraping dough from the wooden board straight into a pot of boiling water, these irregular-shaped delights translate from Swabian-German to mean “little sparrows.”

Thick, comforting noodles arrive in creamy gruyere and Emmental cheese sauce. Braised onions add a touch of sweetness. We close our eyes, taking a moment to enjoy the wonderful aromas of cheesy goodness floating up from the plate.

In between us is also a dish of fresh sauerkraut – all matchstick ribbons of fermented cabbage, with added parsley, seeds and dried cranberries. Slightly sour and wonderfully crunchy, it’s light, vibrant, and tastes just as good mixed into our spätzle as it does when picked from the ramekin on its own.

We try the handmade pierogis too – little dumplings filled with warm pockets of melted cottage cheese and potato plus a little dollop of soured cream and a sprinkling of herbs on the side, as is the tradition.

Boiled fresh to order, we’re a tad too eager to tuck in and burn our mouths immediately. It’s worth it, though.

For dessert, there’s more spätzle, this time encased in cinnamon butter with a generous sprinkling of icing sugar on top. Sweet, carby and comforting, we didn’t think the main could be topped, but it turns out we were wrong. And we’re not even dessert people.

We also try Daz’s wife’s chocolate brownie (Daz, it turns out, is their postman) and, boy, are we glad that we did.

This comes sliced in two as if they know it’s too good not to be shared. Chunks of white and dark chocolate hide within, but the real prize is the tiny pot of white chocolate sauce that accompanies it.

To finish, we’re brought two tiny thimbles-worth of cherry brandy “to aid with digestion.” It tastes just like the juice from a maraschino cherry jar. Prost!

The bill hits the table, and before we’ve even opened it my partner says to me “I want to come back in half an hour and do it all again.” My sentiments exactly.

Amazingly cheap – between us we’ve spent just over £50, and for that, we’ve got three courses and two glasses of wine each. Not bad at all.

A true hidden gem, we doubt The Sparrows can possibly stay this way for long. It’s safe to say, after just one visit, we are already plotting our return.