Mimi and The Mountain Dragon: the new BBC Christmas animation made in Altrincham 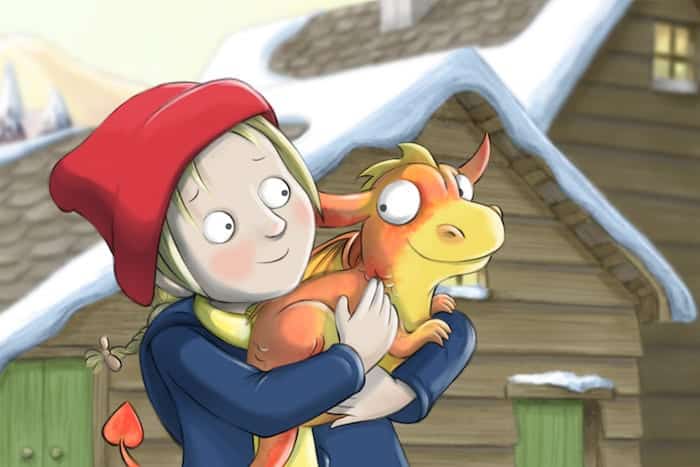 Following the excitement and pressure of Christmas Day, Boxing Day can provide much-needed respite, a chance to settle down on the sofa and watch something cosy and uplifting on the box with the family.

It’s why Boxing Day afternoon is the perfect slot for Mimi and The Mountain Dragon, an animated adaptation of Sir Michael Morpurgo’s children’s book, which was made here in the north west at the Altrincham-based animation studio, Factory.

The charming 25-minute film is a co-production between Factory, that’s created the likes of Clangers, Newzoids and Scream Street, and Leopard Pictures.

“We are absolutely thrilled to have made this magical 2D animated special of Mimi and The Mountain Dragon for BBC One,” says Factory’s MD Phil Chalk.

“The film has been produced at Factory’s studios with a truly talented team, who have worked tirelessly to bring Michael’s wonderful story to life.”

If it’s anything like the response at the preview screening, which took place at HOME in early December, then all ages will enjoy this beautiful film. It might be less than 30-minutes long, but it’s been made with meticulous detail and real passion.

In fact, it’s been a remarkable eight years in the making involving a huge team of people, including the writer Owen Sheers, illustrator Emily Gravett and the Oscar-award winning composer Rachel Portman.

It’s her original score that the BBC Philharmonic and singers from the Hallé’s family of choirs recorded at MediaCityUK.

The story’s set in and alpine village where the residents live in fear of the Mountain Dragon. In order to scare the dragon away, the villagers make as much sound as they can every Christmas.

One day, while her parents and brothers are busy preparing for the procession, a shy little girl called Mimi heads out to the family’s woodshed where she finds a baby dragon.

After a tentative start, they become friends and Mimi decides to embark on the hazardous journey up the mountain in order to reunite the dragon with its mother.

The original story was inspired by a holiday Morpurgo took in Switzerland some years ago.

“I came across the story by accident when my wife and I were on holiday in the Engadine Valley. We’d had a hot chocolate and were walking through the snow in this village and then the most extraordinary thing happened, we heard these loud noises coming from behind a school,” recalls Morpurgo, the author of War Horse and whose voice you can hear at the beginning of the film.

“It turned out to be these primary school children with these riding whips. They were practising for this procession which happens every year where they drive away the evil spirits by cracking these whips and making noise.

“I thought, how wonderful, I’m going to write a story about this and now it’s been adapted for the screen.”

Ironically, the very thing that attracted wordsmith Sheers to the project was the fact there’s such little dialogue.

“This was going to be told through orchestral music so for someone who always works with words, I was fascinated about the role of the writer in that situation,” says the poet and screenwriter.

“My role was to adapt it to fuel Rachel so she could write the music, so we had lots of to-ing and fro-ing, talking about the emotional contours of the piece, and then later it was about fuelling the animators.

“In the end, the words I wrote melted away into music and images and I loved that idea.”

Phil Chalk remarks it was a privilege to work with such an esteemed team.

“To have the opportunity to work alongside such celebrated individuals such as Sir Michael Morpurgo, Rachel Portman, Owen Sheers and Emily Gravett has been a real honour and we can’t wait for everyone to watch it on Boxing Day,” he says.

And they’re already looking forward to what the new year will bring.

“We are incredibly proud to be based in Manchester, which is now becoming a thriving hub for animation in the UK.

“Since opening our doors in 2010, we have made over 85 hours of animated content including BAFTA-winning Clangers, Scream Street, Newzoids and our new show Norman Picklestripes.

“We are looking forward to 2020 as we have so many wonderful projects in the pipeline at Factory.”

Mimi and The Mountain Dragon airs on BBC One at 3.20pm on Boxing Day

The taste of Catalonia