Review: War Horse at The Lowry 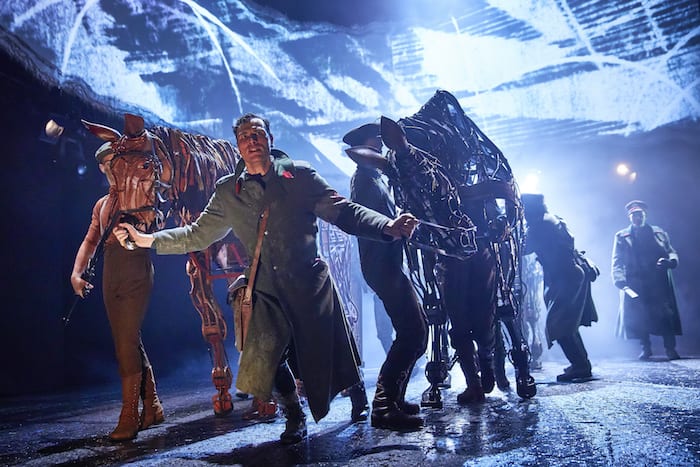 The term ‘war horse’ is sometimes to applied to old theatrical productions still doing the rounds, surviving precisely because they are old fashioned and lacking smoke, mirrors, and effects. Agatha Christie’s The Mousetrap, Woman in Black and Stomp are good examples.

War Horse sits firmly in the middle, because even though this play based on the children’s novel by Michael Morpurgo tugs at the heartstrings and is reminiscent of other tales of friendship involving child and animal or alien, such as ET, Kes and The Black Stallion, it features such amazing puppetry that you will find yourself forgetting that Joey the horse is not real.

16-year-old Albert Narracott (played beautifully by Thomas Dennis) feels stuck in that awkward phase between man and boy. His dad drinks himself into oblivion, and the poor lad really needs a friend. Dad’s dependence on alcohol bears fruit though, as one day he goes off to the market to buy a calf and instead comes home with a horse that he buys for just 39 guineas.

Albert’s life is now complete. He has a best friend – a horse he names Joey.

Or is it? The title tells you this is not the end of the story. Once Joey is sold to the army by Albert’s dad, this epic production gallops right across your heart, providing many tear jerking moments, as the lad attempts to find his equine friend.

Even though their friendship is beautifully drawn, Marianne Elliott and Tom Norris’ dazzling play (first produced for the National Theatre and now a global phenomenon) is far more than a simple tale of a boy and a horse. It explores the effects of war, PTSD and, more importantly, how many soldiers did not talk about their experiences, often sending letters home which painted a rosy picture to protect family, friends, and themselves from the grim reality.

Nick Stafford has adapted Morpurgo’s novel and given it an epic quality. We spend time with the various people Joey encounters and see what they get from their encounters with this beautiful animal.

The puppeteers do a tremendous job. This is much more than a pantomime horse. It has thoughts and feelings. They not only bring the horse to life, they ‘act’. Their movement is stunning as they canter across the stage, a mixture of dance and mime. Seeing is believing.

The design of these beautiful creatures is also striking. The Handspring Puppet Company have created so much more than a shell for these talented folks to lift and move. The horses have muscles, emotions and sense of longing. This is down to them and the wonderful actors pulling the strings.

Thomas Dennis manages to avoid the cliches of an adult playing a child by just wearing his heart on his sleeve. He reminded me of David Bradley in Kes, because his turn is completely natural and not forced. He holds back when many would be tempted to overdo the sentiment. And this means you connect with ease.

The play itself feels too long and would benefit from losing about 15 minutes, and the mixture of German, French and British accents does go a bit ‘Allo ‘Allo in one part of the play.

But Joey himself is such a magnificent creature and he and Albert make such an indelible impact that you will be sniffling by the time you reach the denouement and blaming hay fever as the tears stream down your face. I’m going again, just thinking about it.

War Horse may be 10 years old but it still has the energy and vitality of a new born foal. It’s at The Lowry until 30 June.