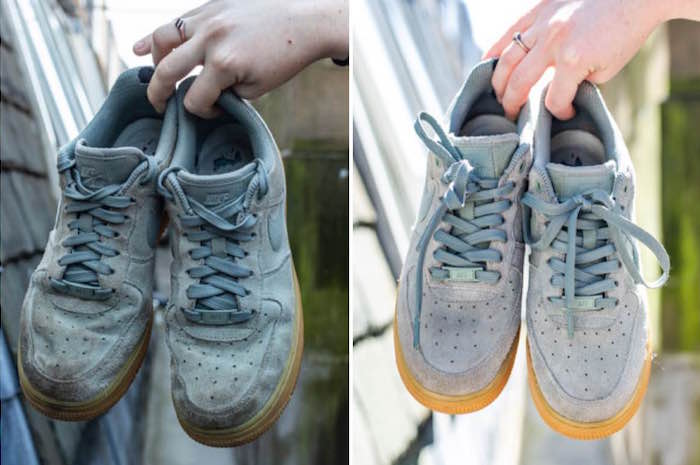 Manchester’s first trainer cleaning boutique has opened up at Hatch on Oxford Road, and we couldn’t be more pleased.

Yes, the days of sticking our kicks in the washing machine in a pillowcase and praying the soles are still glued on when the cycle ends are finally over. At last, the professionals are here to sort us out.

After all, we’ve all got at least one story about a pair of trainers we’ve loved and, subsequently, ‘ruined’.

Or so we thought. It turns out, all those pairs of trainers we’ve binned over the years with a heavy heart could’ve (probably) been saved if we’d just had the know-how – or a trainer cleaning boutique on our doorstep.

Fortunately, SneakerPharm is here to fix our woes and ensure a beloved pair of trainers never ends up in the trash again. 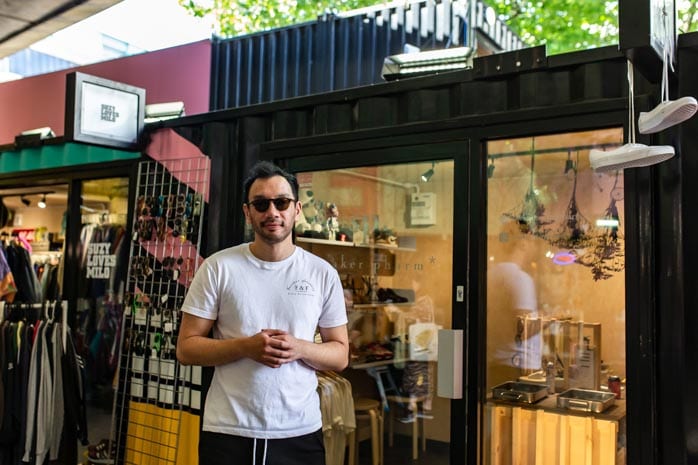 Part of the new retail line-up added to Hatch following the developments’ recent expansion, the premium shoe cleaning and repair shop does it all: deep cleans, sole swaps, resprays, de-yellowing – anything you can think of, really.

Founder Vincent Tao has a degree in business and law and spent ten years running a restaurant with his dad in Prestwich prior to setting up SneakerPharm.

Having always had a love for trainers and fashion in general, he set upon the idea of his own shoe-cleaning boutique.

Incorporating elements from interior design, music, fashion, everything, it’s more than just a trainer cleaning store. It’s somewhere we want to hang out.

Inside, he has designed and built everything himself. It’s a tiny space but feels very zen, helped along by the scent of coconut and jojoba rising off the trainers he’s scrubbing down as we arrive.

He’s currently approaching retailers to set up drop-off points for those who can’t make it down to Hatch and has plans to make his own detergent that he can fragrance for different seasons and moods.

On the walls are shelves lined with fashion magazines, trainers, merchandise and art. Tucked into the corner is a KRK Rokit speaker, pushing out chilled vibrations, and underneath sit a couple of stools for customers to pull up a pew and have a good chat.

He tells us he was inspired by the likes of Opening Ceremony in New York and Dover Street Market in London – cool fashion spots that attract a crowd that’s there just as much to hang out and meet like-minded people as they are to shop.

“Everyone who walks into my shop is treated differently,” he says.

“it’s not just, oh here we go, another shoe… I’ll spend time talking to them, engaging with them, finding out what they’re like, just have a good friendly chat.

“That’s the good thing about independent business, you can do that.”

Of course, there are several services available already for Mancs who want to get their trainers fixed up, but none of them has had a physical location until now.

For Vinnie, one of the key drivers behind going down the physical location route was the element of trust. After all, we all carry some sentimental attachments when it comes to our favourite shoes and we want to know they’re being left with a safe pair of hands.

“There’s an online presence [for this kind of service], you can ship them off. But I’m thinking, I’ve got a pair for £500 or £600, shoes I can’t buy anymore, or a shoe that’s quite sentimental and there are attachments to it. I don’t want to ship them off.

“I don’t know them, I can’t see them, I can’t meet them. And if anything does go wrong, I can’t really chase them. With a physical shop at least you have that level of trust.” 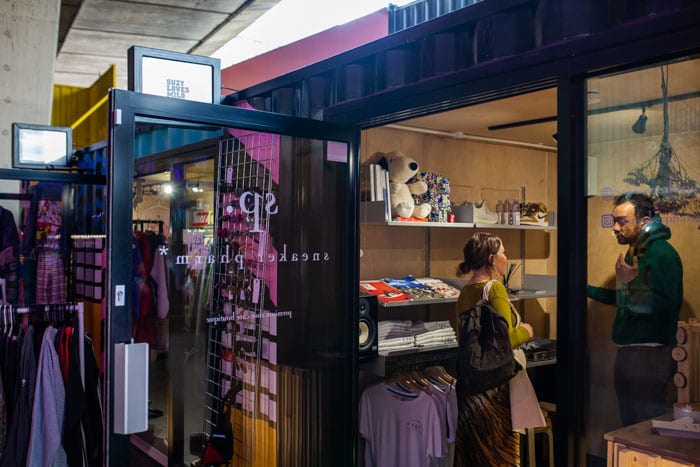 He’s very conscientious that, whilst trainer cleaning is a relatively humble thing to do, the job he does carries great importance to his customers.

“I’m under the impression things have meaning to people as well. Rather than cleaning shoes, I’m restoring a potential memory, like – you were on a first date wearing that shoe, or, I don’t know, you know, you went to a first gig with someone in that shoe and you don’t want to throw it away because there’s an element of that.

“Maybe it’s subconscious, but you have a shoe sat there and you’re thinking, why haven’t I thrown it away? Oh yeah, that’s right, because it means something to me in that way. And I thought it would be pretty cool to restore that.”

He shows us a pair of Vans which he was wearing during the build, which he reveals were caked in cement by the time he finished.

You wouldn’t be able to tell, they’re completely spotless now.

“I prefer when they’re absolutely ruined because the before and afters are so dramatic. It’s very therapeutic for me. It’s just nice to sit, have music on and work on someone else’s shoe. And the look that they give you, they’re super happy and that’s what I appreciate as well – the community and the people in general that I speak to here.

“Mud’s mud, it’s not even that bad, you just give it a scrub. I think the hardest thing to get rid of is when the shoe starts speaking, but I can do that as well. Glue it, clamp it, and then done, finished, your shoe’s fine. Everyone’s got some like that.

We touch on the question of sustainability, a pertinent topic at the moment for us all but particularly so in the fashion industry, where the true cost of fast fashion is starting to become increasingly difficult to ignore.

In the past few years, huge fashion brands such as H&M, Nike and Burberry have all been accused of burning and shredding billions of pounds worth of unsold clothes – all in the name of protecting their brands. It’s fashion’s dirty secret.

But of course, we as consumers have a part to play in this throwaway culture, too.

“Fast fashion, I hate it. I understand the concept of it, it’s easy, not everyone can afford crazy expensive prices, but there’s a reason why they’re crazy expensive. It’s because they’re sourced from ethical things or it takes time to design.

“I say I hate it but I don’t really have that much against it – I just don’t like the fact that people don’t think twice. So they go, I need a new thing for a specific party, buy the thing, then they don’t wear it – it’s just there, or they throw it away.

And of course, the other incentive is financial. Vinnie charges a starting price of just £10 for a thorough clean on standard materials like leather, nylon and rubber – a whole lot cheaper than buying a brand new pair of shoes.

He will do handbags and other styles of shoes on request too. And even if you’re looking at a premium clean with materials like suede, nubuck or cotton mesh, the price of a clean only bumps up to £15.

We left a pair of shoes with him to clean, and when we picked them up they not only looked spotless but they smelt wonderful too.

Wrapped up in custom SneakerPharm bags and fitted with shoe horns, it was like getting a brand new pair of shoes.

If you want to make your old trainers feel like new again, Vinnie is the man to do it.

Get down to Hatch on Oxford road to check out SneakerPharm for yourself, or message him on Instagram – and he’ll have your shoes sorted out in no time.