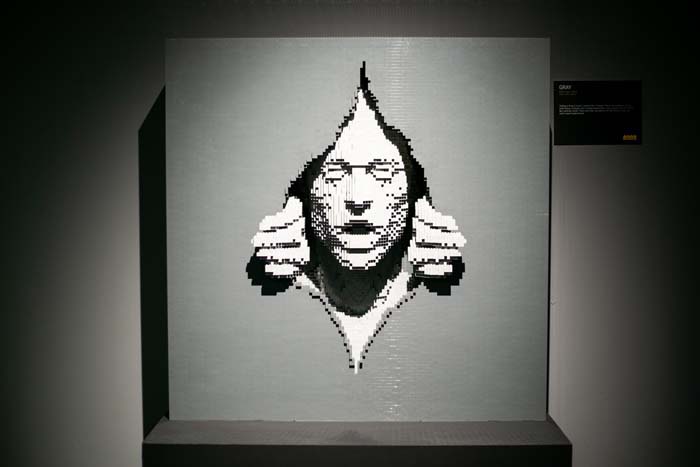 Can LEGO really be art? That was the question on our lips as we walked over to Manchester’s Great Northern Warehouse this morning.

It’s a medium we’re all familiar with. Playing with those brightly coloured bricks, after all, is as much a childhood rite of passage as stepping on them.

But where does modelling end, and contemporary art begin?

If you look at the work of Nathan Sawaya, the Wall Street lawyer-turned-artist behind The Art of the Brick, you start to get a handle on a distinction.

Over 75 of his pieces go on display inside the Great Northern Warehouse from tomorrow, showcasing a mix of original sculptures and classical art reproductions all formed using the humble brick.

The Past Masters section, devoted to Sawaya’s recreations of classical pieces such as Gustav Klimt’s The Kiss and Japanese ukiyo-e artist Hokusai’s The Great Wave off Kanagawa, feels more like a LEGO museum than a gallery exhibit. Not to undermine its impressiveness.

Many are straight reproductions, like Vermeer’s Girl with a Pearl Earring or Da Vinci’s Mona Lisa.

But others are more interpretative, taking the iconic oil paintings off the canvas and into the 3D world. Gustav Klimt’s The Kiss and Edvard Munch’s The Scream spring to life as they emerge from their LEGO canvases.

But the truly original artworks are to be found next door, in Human Condition.

It’s here you’ll find Sawaya’s most famous work, known simply as Yellow. Depicting a figure tearing open its chest to reveal an avalanche of bricks within, it is deeply personal – representing the artist coming out of the lawyer.

“What impressed me most when I first met Nathan and I went and looked at his art is the depth and variety of what he does. 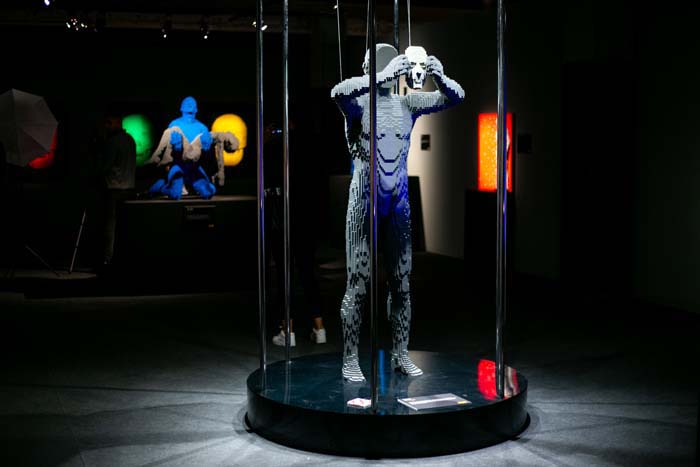 He’s not wrong. Sawaya’s creations take on new power as he examines humanity in all of its excruciating, existential anguish.

Fenced inside a cage, one sculpture holds up a LEGO mask as if ruminating on the point of its existence.

Behind it another piece depicts a child hanging limp and lifeless in the arms of its father, brought to his knees with sorrow.

Other pieces of note include an half-submerged swimmer fighting against the current (“of life,” explains Iacampo), a trio each with different geometric shapes where their heads should be, and a figure whose hands have crumbled into a pile of bricks on the floor.

Elsewhere in the gallery space, further rooms nod to his sketches and inspirations, and housed beyond Past Masters is In Pieces – a collaboration between Sawaya and photographer Dean West.

Each image tells a story and incorporates a LEGO creation of Sawaya’s. Some are not easy to spot at first glance.

In one photograph a woman in a red dress clutches herself for warmth outside a cinema. In another, a man uses a red LEGO brolly to shelter from the rain. Next to each sits the original sculpture.

Last but not least, waiting through a netted curtain is a giant T-Rex dinosaur skeleton. Composed of 80,000 pieces of LEGO, it is a true feat of engineering.

Here, as part of The Dinosaurium, families can also have a play in giant LEGO pools at the end of the exhibition. Or, you know, any LEGO enthusiasts, really. As Sawaya shows with this exhibit, LEGO is definitely not just for kids.

The Art of the Brick has been on tour since 2007, having made its last appearance in the UK five years ago. It remains on display until April.

You can find the exhibit at Unit 5 in the Great Northern Warehouse. Prices start from £9.50 for children, £14.50 for adults, concessions at £12, and a family of four ticket priced at £42.