City centre pubs linked by one thing - they have all come under threat. 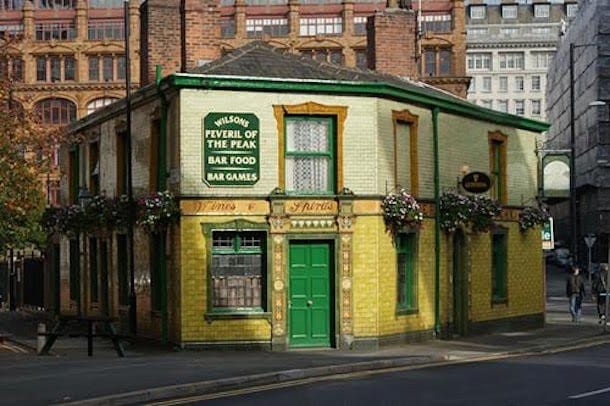 I used to think a pub was just a place to go for a drink. Now that so many are closing, I realise they are much more. They are a link with the past, a focus of memories – both personal memories and the collective memories of the city. When they’re gone, we miss them.

“the Manchester pub ‘preserved in aspic’ inside a hotel would have been a big tourist attraction.”

Peveril of the Peak is one of Manchester’s most celebrated pubs, not least because of its two tone green tiled exterior. It’s the only ‘detached’ pub in Manchester city centre. You can walk right around it. It dates from the early 19th century and is said to be named after a stagecoach that used to run from Manchester across the Pennines. It’s an architectural gem. Outside there are those wonderful tiles and ornamental details. Inside there are original wooden benches, stained glass, etched mirrors and bells. Peveril of the Peak has been drawn many times by Caroline Johnson and other urban artists.

I understand Peveril of the Peak was once under threat of demolition by a planned change in the road layout. A campaign was formed, the road was diverted and the pub was saved.

Not far away from the Peveril is The Britons Protection, also dating from the early 19th century. It’s another time capsule. While practically everything else around it has changed, The Britons Protection has remained defiant. True to its name, it has stood its ground. Small on the outside, it’s surprisingly spacious on the inside. There are homely rooms with real fires and many attractive wood fittings. I know The Britons Protection well because the now dormant Manchester Civic Society once held their meetings there. Today it overlooks the Bridgewater Hall, which is built on the site of the old Lower Mosley Street bus station, so it’s likely many people must have enjoyed ‘one for the road’ there. 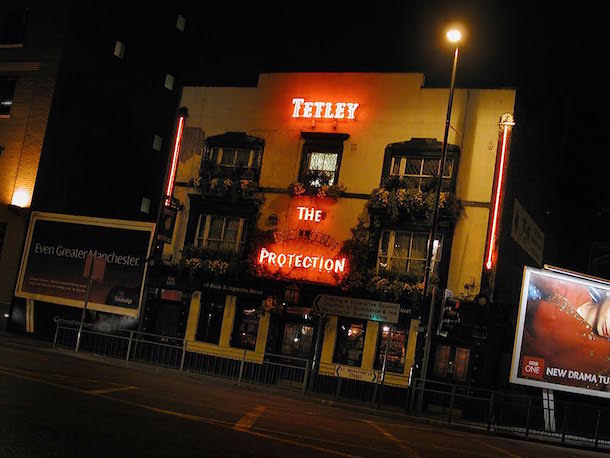 There used to a pub just a stone’s throw away which succumbed to the pressure of development. It was one of Manchester’s best loved pubs and though it’s nearly 20 years since its demise, people still talk fondly about it today.

Tommy Ducks was housed in a row of small cottages dating probably from the 18th century. It was famous for the ladies’ undergarments that adorned the ceiling of interior. I remember them well, and the jolly atmosphere inside. It was pure Manc. Tommy Ducks survived into the nineties but it was in the middle of a prime city centre location. Despite a campaign to save it, it disappeared. It was there one day and gone the next-lierally. Why couldn’t it have been incorporated into the hotel, like Lark Hill Place in the Museum of Salford? Irish pubs have been installed in hotels and airports all over the world. Most architects of today would find the idea abhorrent, but I’m sure the Manchester pub ‘preserved in aspic’ inside a hotel would have been a big tourist attraction.

And finally to another pub, about five minutes walk from Tommy Ducks, the Sir Ralph Abercromby. It has already closed its doors but the building, including its signage, is still there on Bootle Street. Due to an office development that’s set to go ahead, it looks like it is going to become another Manchester memory, just like Tommy Ducks.