Manchester’s quirkiest pubs – the smallest, the biggest, the converted loos and more 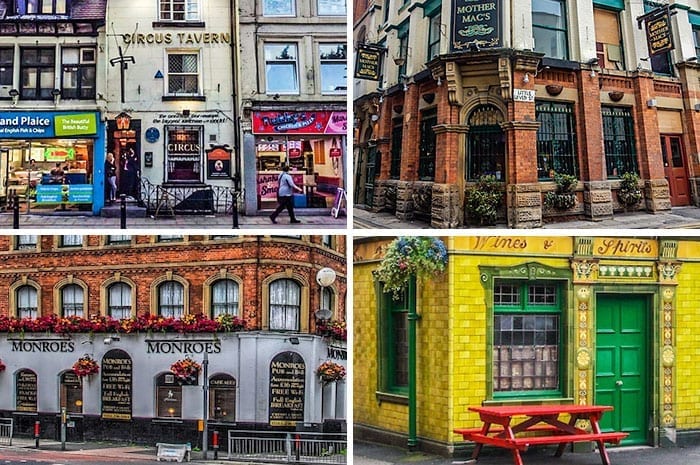 Manchester may have witnessed a boom in stylish new restaurants and bars in recent years, but the city is also famous for its wealth of historic, traditional and unusual pubs.

With the oldest dating back some 500 years, up to the present day beer houses and independent breweries injecting new life into the industry, you’re never far from an interesting story and a decent pint in the city.

Here we take a look at some of the quirkiest pubs that Manchester boasts – whether it be for their size, their age or their unusual history or setting. 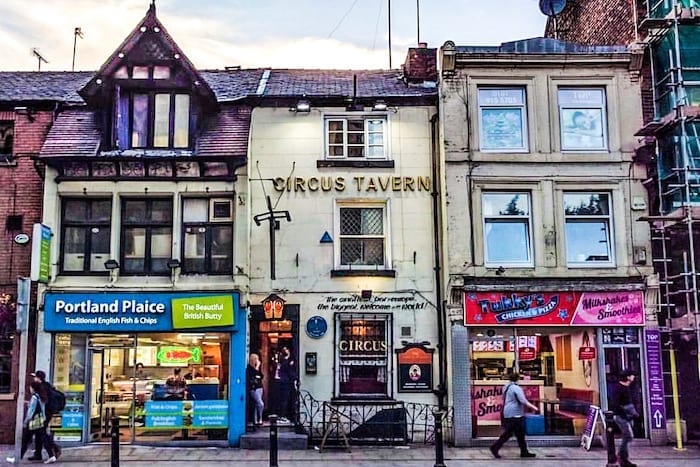 The city’s Circus Tavern is so proud of its unique selling point, that it has it inscribed on the front of the building.

“The smallest bar in Europe… the biggest welcome in the world” is the message above the windows of the tiny pub sandwiched along a busy stretch of businesses and hotchpotch of buildings on Portland Street in the city centre.

But note the clever wording there – it’s the smallest BAR you will find inside – as in the place where the pints are pulled.  And it is indeed teeny tiny, at around 1 metre long, just enough for one member of staff to squeeze the pumps behind.

The pub itself is among the smallest in Manchester – although some say in terms of square footage it’s on an equal footing with its near-neighbour the Grey Horse Inn which is of similar bijou proportions. 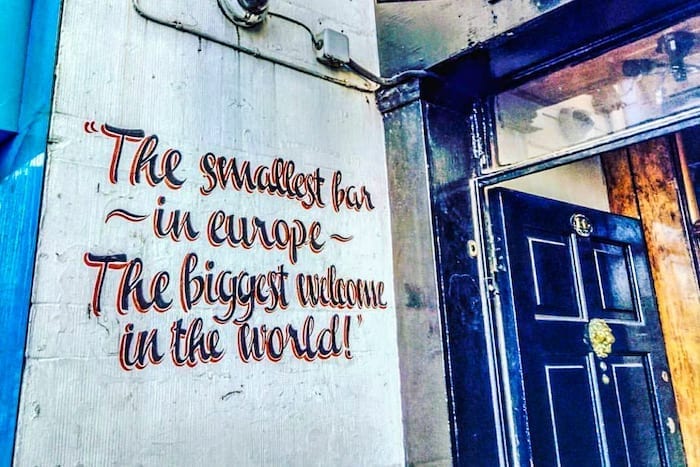 The Circus, which first opened as a pub in 1842, fits just 45 people inside (at a push) which means you certainly get up close and personal with your fellow revellers.

And it ensures the pub’s boast of the biggest welcome is also bang on the money.

The biggest – and it’s a bit of a Tardis 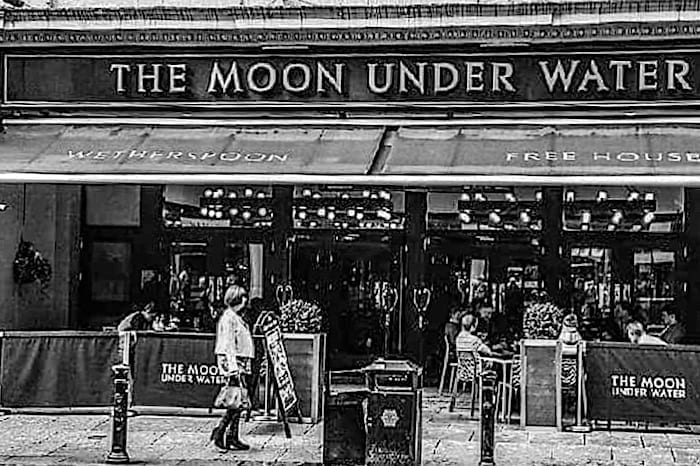 At one time the biggest pub in the entire Wetherspoons UK empire, Deansgate’s The Moon Under the Water is a vast proposition thanks to its Tardis-like interiors.

It was turned into a pub in 1995, inside the derelict former Deansgate Picture House cinema which dated back to 1914.  It retains many of the old cinema features, including the truly spectacular arched and corniced ceiling at its heart – and even the old original projector which remains on display. 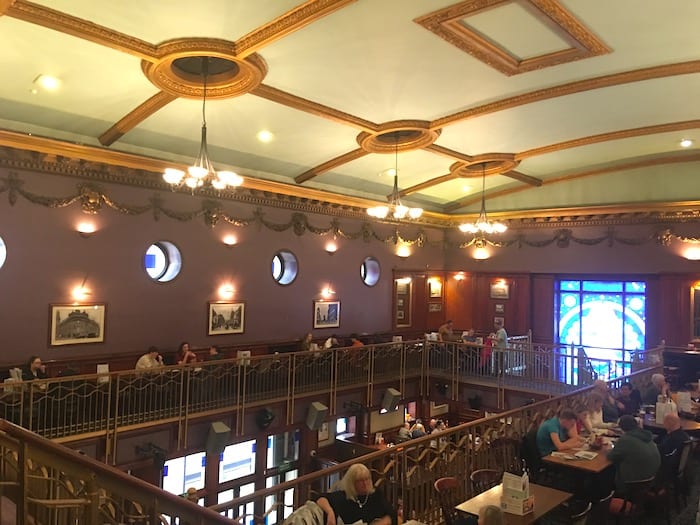 And as for the size?  It’s a dizzying 8,000 square foot of pub space spread over two floors with three different bars catering for up to 1,700 people at a time – and it regularly welcomes 10,000 revellers a week.

Alas, it has lost its crown as the biggest Wetherspoons in the UK these days though – that title now belongs to the vast Royal Victoria Pavillion which was opened by the pub chain in Ramsgate in 2017. 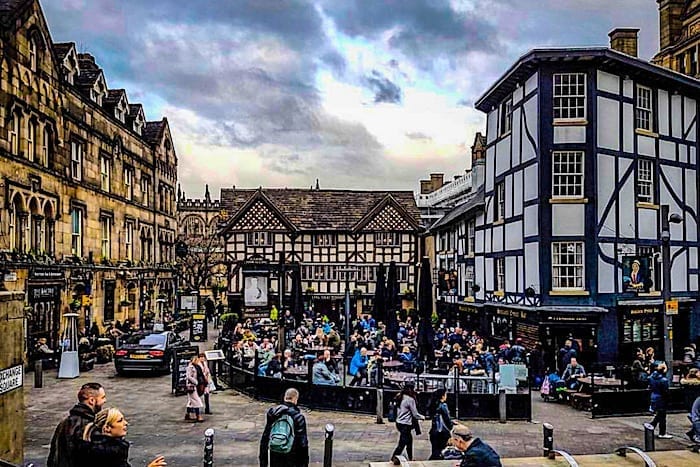 The oldest pub in Manchester is also one of the busiest and most recognisable drinking spots in the city.

The Old Wellington Inn, nestled next to Sinclair’s Oyster Bar, continues to welcome the Manchester masses over 550 years since it was first built and remains an ever popular spot on sunny days and big match days at its prime spot just off Exchange Square.

Mind you, when it was first built in the city in 1552, it was based just off Market Street – and was originally a draper’s shop.  It was not until 1830 that it gained a pub licence, originally as the Vintners Arms, then the Kenyon Arms, before eventually becoming The Wellington Inn in 1865. 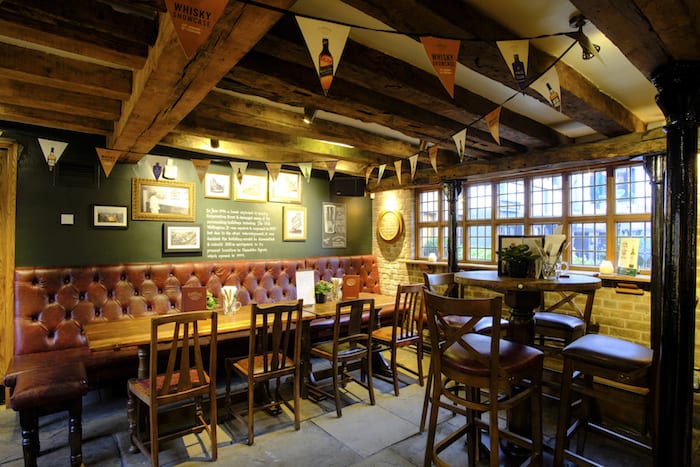 In 1998 as part of massive redevelopment of the city, both The Old Wellington and its pub neighbour were moved 300 metres and painstakingly rebuilt brick by brick and timber by aged timber to their new home at The Shambles Square, next to the Cathedral, in a quite extraordinary feat of engineering.

It’s the oldest building of its kind in Manchester, and inside you’ll find all those aged quirks like the wooden timbers, uneven floors and leaded windows. 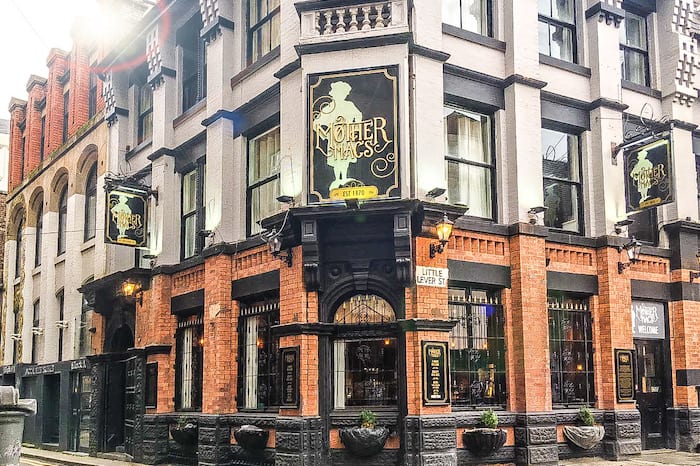 Hidden away on the corner of Back Piccadilly and Little Lever Street in the Northern Quarter is the imposing Mother Macs pub.

A traditional boozer in many ways, but unique because of the rather horrifying place it takes in Manc history.

For the pub was the scene of one of the most horrendous massacres in the city – which it commemorates with a large plaque outside the front door. 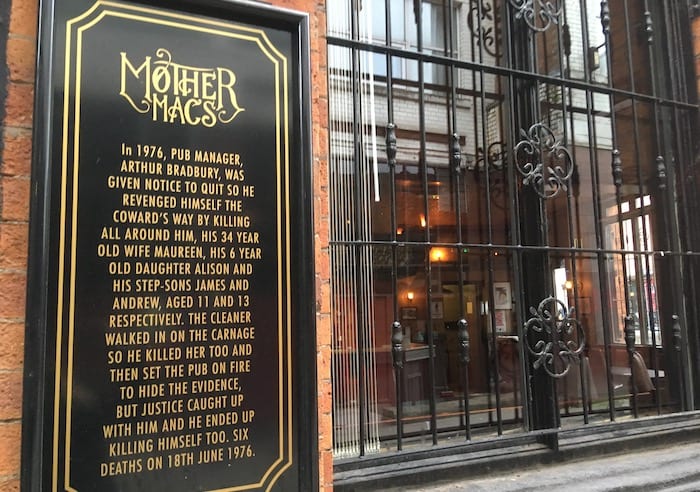 As the plaque retells, back in June 1976 the pub’s manager Arthur Bradbury was given notice to quit the pub – so he revenged himself the coward’s way by killing all around him.

The ensuing massacre saw Bradbury kill his 34-year-old wife Maureen, 6-year-old daughter Alison and stepsons James and Andrew aged 11 and 13.  When the cleaner walked in on the carnage he killed her too – before setting the pub on fire to hide the evidence and killing himself too.

A very macabre past, but one that the pub commemorates with original newspaper clippings from the time inside the venue too. 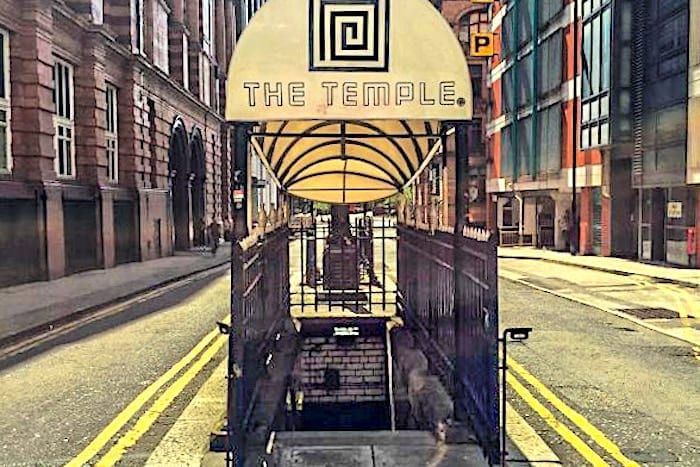 Perhaps Manchester’s quirkiest pub is the one based inside a former Victorian public convenience just off Oxford Road.

The Temple, originally known as The Temple of Convenience, retains the original metal railings and tiled entrance of its former subterranean toilet life.    But that’s where the links to past, ahem, unsavoury stuff ends thankfully.

It is known for its rock ‘n’ roll vibe, and famous fans to have been found enjoying a bevy there over the years have included the Bury band Elbow.

Not one for those who fear confined spaces, or like to be assured of a seat when they head out for a drink, but for sheer character it can’t be beaten. 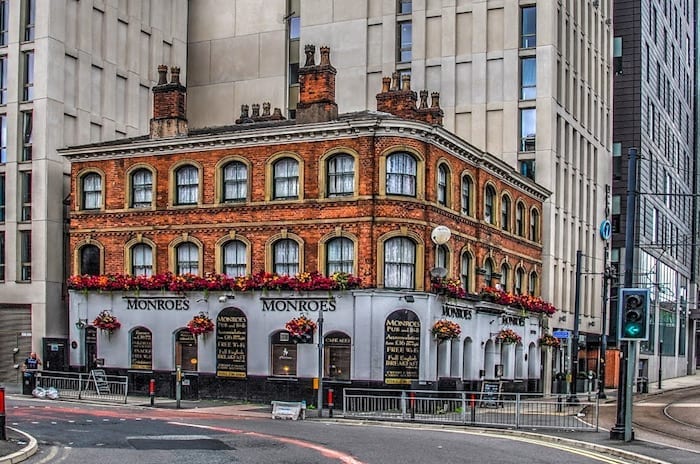 There can be no other Manchester pub quite so dedicated to a theme than Monroes.

Standing defiantly on the corner of London Road, Piccadilly, for the past 200 years as huge new buildings sprout up at every edge, it remains a shrine to Hollywood icon Marilyn Monroe perfectly captured in a nostalgic 1980s haze of mirrors and neon. 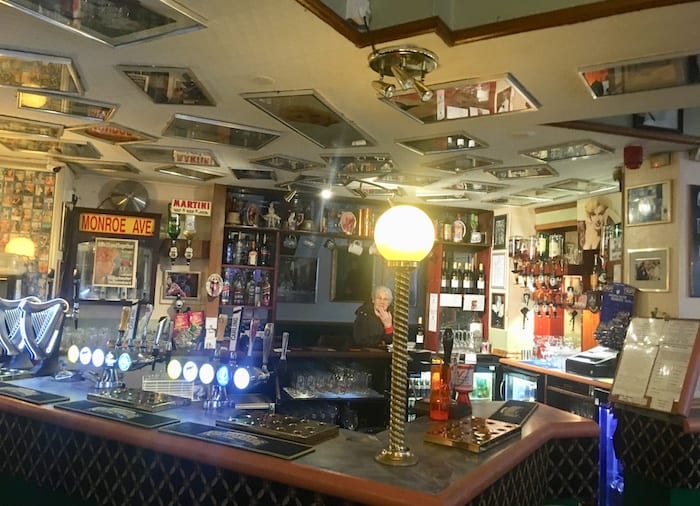 Formerly The White Hart, it became Monroes in 1984 when themed pubs were all the rage in Manchester. 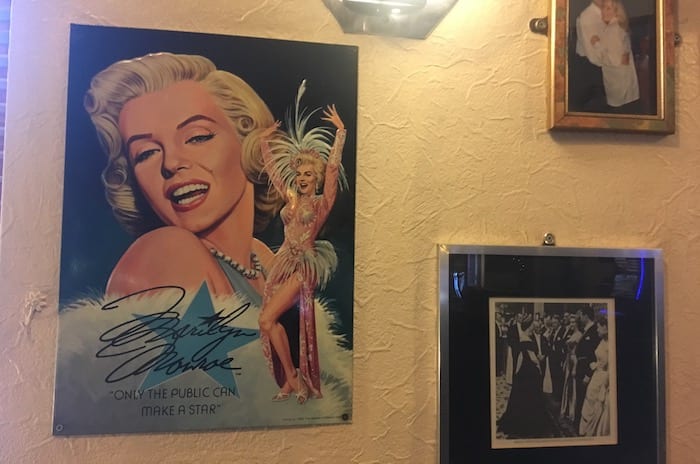 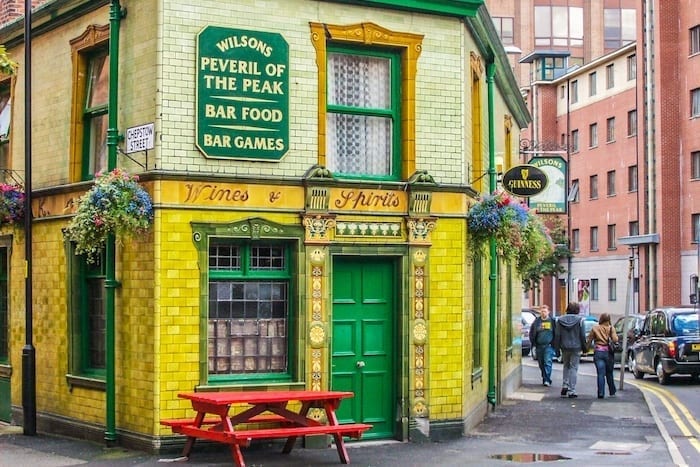 There are few more splendid buildings in Manchester – let alone pubs – than the iconic, green-tile clad Peveril of the Peak.

Said to be the only detached pub in Manchester, you can walk right around the truly stunning Victorian building and marvel at this little time capsule on Bridgewater Street that dates back to 1830.

And once inside, the historic splendour continue with old polished woods, original benches and ornamental details.