The parade starts in Albert Square with the fireworks finale in Chinatown... 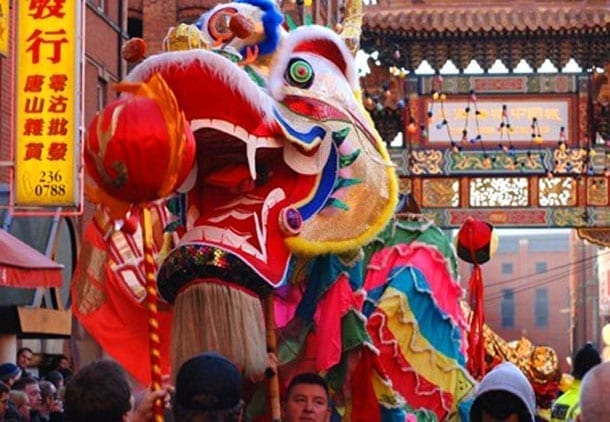 The Dragon Parade takes place on Sunday 2nd February from 1pm until 6pm. The parade starts at 1pm in Albert Square with the fireworks finale in Chinatown at 6pm.

Manchester’s Chinatown is one of Europe’s biggest. Yet its location – tucked into a narrow grid of streets behind Piccadilly Gardens – means that, often, visitors leave Manchester without discovering its colourful, tightly packed streets.

Luckily, anyone planning a visit to Manchester over winter will have no problems finding Chinatown – as the city hosts the North’s biggest Chinese New Year celebrations. The Year of the Horse is welcomed in via a programme of events that begins in late January and culminates in a spectacular parade that last year was watched by an estimated 75,000 people. Visitors to Chinatown’s myriad of stores and eateries will be able to collect their own lucky red envelope too between 20th January to 3rd February 2014. Envelopes are filled with great gifts, prizes and goodies, including vouchers from Manchester’s leading retailers, hotels and businesses.

Things kick off on 18 January as the city decks its halls (and streets) with 3,000 Chinese lanterns; the bright red decorations stretch out across not just Chinatown but Manchester’s main shopping streets. From 30 January – 1 February, St. Ann’s Square plays host to a Chinese food market – expect tasty offerings from Chinatown’s best restaurants. Master Chu’s Lion Dancers will also be performing here at 1pm and 5pm on Friday 31 January and 5pm on Saturday 1 February.

The Northern Quarter’s Centre for Chinese Contemporary Art also gets in on the act: it is commissioning local illustrator, Lydia Meiying, to create a horse-themed installation in its picture windows (14 January-10 February).

There’s plenty else on, too, from Chinese music and themed events at Manchester Art Gallery (2 February) to a Tiger Pop-Up Bar and an arts and craft fair at Chinatown institution, the Yang Sing (2 February).

All of it is easily outshone, however, by the centrepiece of Manchester’s Chinese New Year: the Dragon Parade, which this year takes place on Sunday 2 February. With a 175-foot paper dragon, a lion dance, martial arts demonstrations, art workshops, fairground and a 15-minute firework display, the Dragon Parade is one of the highlights of Manchester’s annual events calendar. So even if you’ve never yet made it onto Chinatown’s streets, there is no better time than Chinese New Year to experience the very best it has to offer.