Celebrate Chinese New Year 2015 in Manchester – Year of the Ram

In 2015, the city of Manchester will be welcoming the Year of the Ram with its biggest and brightest celebrations to date.

Thousands of lanterns, a spectacular light show and explosive art will animate the city centre, alongside street food, music and martial arts and the ever popular Dragon Parade and fireworks finale.

Organised by FCAM (Federation of Chinese Associations of Manchester), the Heart of Manchester BID and Manchester City Council, with the support of Manchester Chinatown, the city-wide celebrations will showcase a variety of contemporary and traditional Chinese culture from Thursday 19th to Sunday 22nd February.

Thousands of red Chinese lanterns will adorn the city’s shopping streets again this year in the weeks leading up to the celebrations, with buildings and shops illuminated in red and gold during the weekend itself.

There is also a chance to win a holiday of a lifetime by visiting chinesenewyearmcr.com. The prize includes two return Premium Economy flights with Cathay Pacific from Manchester to Hong Kong and four nights accommodation, two nights at the luxury Shangri-La and two nights at the Kowloon Shangri-La hotel. To start the trip in style, the winners will be given free parking at Manchester Airport, access to the Escape lounge and the opportunity to spend World Duty Free vouchers.

Highlights this year include:

Food is one of the fundamental aspects of Chinese New Year, bringing families together to enjoy traditional fayre and this year Manchester city centre is no exception. St Ann’s Square will be hosting a Chinese food market from 19th – 22nd February featuring some of the finest food directly from Chinatown including Yang Sing, I am Pho and Pearl City. Guests can relax in the sumptuous red-draped marquee and soak up the atmosphere with traditional music and décor. 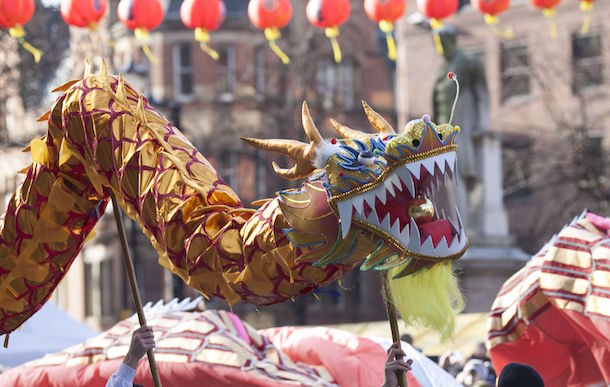 At midday on Sunday 22nd February, Albert Square will come alive with martial arts and dance displays followed by the Dragon’s dramatic appearance at 12.30pm outside the Town Hall. From 1pm follow the magnificent Dragon Parade through the city’s streets to Chinatown’s NCP car park where it will be greeted with firecrackers and New Year addresses from The Chinese Consul-General of Manchester, the Lord Mayor of Manchester and community leaders. In Chinatown, you’ll find traditional lion dancers, martial arts displays, spectacular Chinese acrobatics, arts and crafts, workshops and a funfair with over 20 rides on Charlotte Street – culminating in the spectacular fireworks finale at 6pm.

From 11am – 5pm, Chinatown and Albert Square will host over 60 stalls offering a variety of gifts, arts and crafts and a mouthwatering variety of delicious food.

To mark the new year tradition of the giving and receiving of red envelopes, Manchester shoppers will have the chance to win a share of £10,000*. Head to St Ann’s Square on Thursday 19th February to collect your special red envelope, containing a share of the huge prize to spend in one of eight lucky city centre shops including Manchester Arndale, Harvey Nichols, House of Fraser, Selfridges, Boots and Cath Kidston.*prize value from gift vouchers and experiences redeemable in specified stores only. Terms and conditions will apply. Envelopes will be handed out from Thursday 19th as long as stocks last. 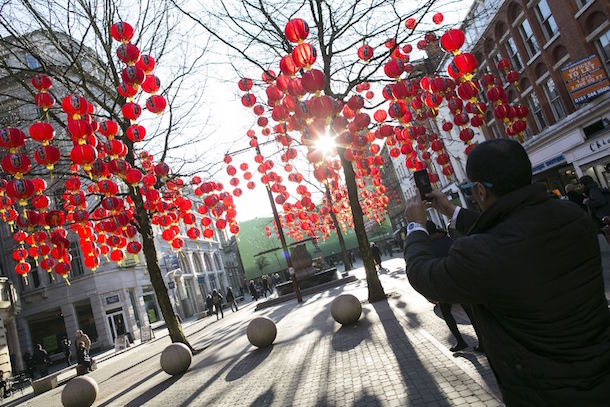 From Thursday 19th – Saturday 21st February, St Ann’s Church will provide the backdrop to a spectacular series of large-scale light, art and film projections each evening from 6pm – 10pm.

Sun Xun: Stately Shadows – to celebrate the major solo exhibition currently in residence at the Centre for Chinese Contemporary Art (CFCCA), three of Sun Xun’s animated films including ‘What happened in the year of the dragon’ will be projected onto the side of the church. Sun Xun’s exhibition at the CFCCA is open until 22nd March 2015.

A taster of Cai Guo-Qiang’s ‘Unmanned Work’ installation – a forty-five metre long, four metre high gunpowder drawing and the first exhibition in the Whitworth Gallery’s new landscape gallery. The projection will provide a glimpse into the making of Guo-Qiang’s work alongside a time-lapse of his completed work being installed and exhibited at the gallery. ‘Unmanned Nature’ opens at Whitworth Art Gallery on the 14th February 2015.

Brought to you by Cathay Pacific and Manchester Airports Group: Thousands of lanterns and an 80 ft snake gliding in and around the church as part of an unmissable light art show using the latest projection mapping technology.

Join Manchester Art Gallery to celebrate Chinese New Year 2015 with traditional Chinese dance, music and storytelling on Sunday 22nd February from 12pm-4pm. There will also be a drop-in creative workshop; ‘Chop Chop, Stick Sticks’! where you can customise your own wooden chopsticks. 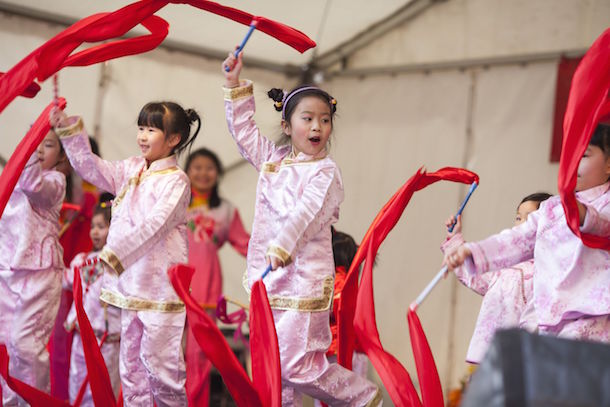 In St Ann’s Square, a variety of family workshops are being hosted by the Centre for Chinese Contemporary Art (CFCCA) and Manchester Confucius Institute with contemporary themes including Bangin’ Paper Fireworks with artist Naomi Kashiwagi and Be Ewe with artist Pui Lee. There will also be workshops using a variety of traditional Chinese arts. Workshops will run from Thursday 19th – Sunday 22nd February from 12pm – 3:30pm, visit www.chinesenewyearmcr.com for the full schedule.

The streets of Manchester will also serve as a stage for The Legend of Nian: A Circus Caravan – a travelling theatre performance of the mythical Chinese tale. Carriage performers will transform into colourful outfits and eye-catching masks, combining modern street dance with traditional martial arts and movement. Hunt for Nian around Manchester’s shopping streets and then head to St Ann’s Square for a fantastic fire and light show. Performances will take place daily from Thursday 19th – Saturday 21st February between 12pm – 4pm and will roam from New Cathedral St, Market St, King St, St Ann’s Square and Exchange Square. The fire and light show will take place daily between 5.30pm – 8pm.

Jane Sharrocks, Chair of the Heart of Manchester BID and General Manager at Selfridges Exchange Square said: “Over 90,000 people experienced Manchester’s Chinese New Year celebrations last year proving what a popular event it is in the city centre calendar. This year, the BID, working together with key partners including FCAM and Manchester City Council will deliver the biggest celebrations Manchester has seen to date. This spectacular four-day event will be one of the best places to celebrate Chinese New Year in Europe.”

“As we prepare to see in the Year of the Ram, this year’s packed programme of events will be some of the best outside of Beijing – a fitting way to celebrate the tremendous contribution that Manchester’s Chinese community has made to the city.”

President of the Federation of Chinese Associations of Manchester (FCAM), Mr Stewart Yip said: “The year of the Ram is the peaceful and orderly animal seen by the Chinese as luck and harmony. A lot of planning, preparation and efforts will be taken to make this year’s celebrations a week full of fun and excitement in Chinatown and across Manchester city centre. The event will be a testament to the success of a multi-cultural society in which people of different cultural backgrounds work together and enrich each other to achieve unity and joyous celebration.

“FCAM is proud to work in partnership with The Heart of Manchester BID (Business Improvement District) on this event to both enrich the culture and bring business opportunities to Manchester.”

For updates on all of Manchester’s Chinese New Year activity, please visit: www.chinesenewyearmcr.com or follow @CNY_MCR on Twitter using the hashtag #chinesenewyearMCR