If you find yourself dreaming about a perfectly poured pint, you’re not alone. We’re all missing pubs right now.

And it’s more important than ever for beer lovers to support Manchester’s incredible independent breweries, who need our custom while pubs, bars and restaurants remain closed.

For Phil and Sam, who’ve been friends since childhood, a passion for good beer and the desire to celebrate our city’s craft breweries drove to them to launch their own business during lockdown.

The local duo launched Hip Flask last year when music promoter Phil and Sam, who worked in advertising, were furloughed from their jobs. 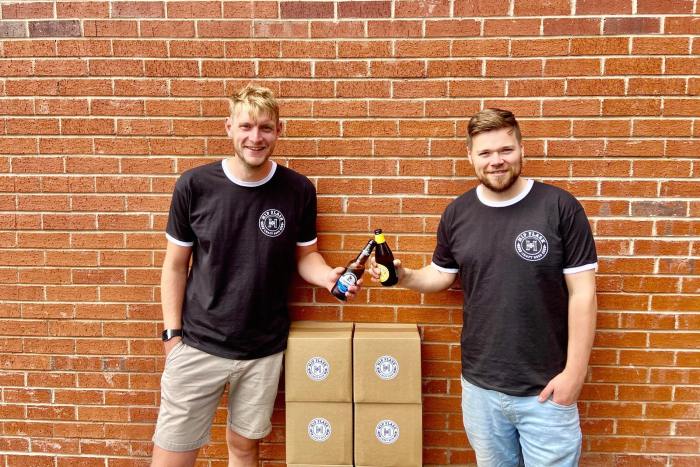 “We’re both into our beer and we’d compare notes on any new and interesting beers we’d tried since we last met,” explains Phil.

“We subscribed to a couple of craft beer delivery companies but we found them a bit lacking. There didn’t seem to be any context to the beers we were drinking or any information on who produced it.

“We know the passion and the artistry that goes into making craft beer and we wanted to showcase this to other people.”

Their aim was to create a selection of beers that captures the spirit of Manchester, as well as offering a range of products you just can’t find in most shops.

“We naively thought it would be a case of buying the beer and start selling,” says Phil.

“It turned out we needed a couple of licences before we could do that, but eventually we’d licenced a spare bedroom in Sam’s house in Manchester to sell craft beer – and Hip Flask was born.

“We started selling a few boxes to friends and we’ve grown from there.”

Manchester is renowned for football, art and music, but Phil and Sam want to show the world that beer needs to be added to the list.

“We wanted to capture the spirit and the vibe of Manchester and the city’s continual defiance in the face of adversity.

“There’s a real appetite for supporting local businesses at this time and it’s great to be able to highlight Manchester’s brilliant beers.”

Hip Flask’s two Manchester boxes are full of the best beers the city has to offer, from the likes of Alphabet, Beatnikz Republic, Brightside, First Chop, Seven Bro7hers and Shindigger.

From pale ales to stouts, Hip Flask’s best of Manchester boxes have something for everyone, along with information on each of the beers and details about each brewery. And they’re all vegan friendly, too.

And, of course, a box would make the perfect present for the beer-loving Manc in your life. Assuming you can resist keeping it for yourself.