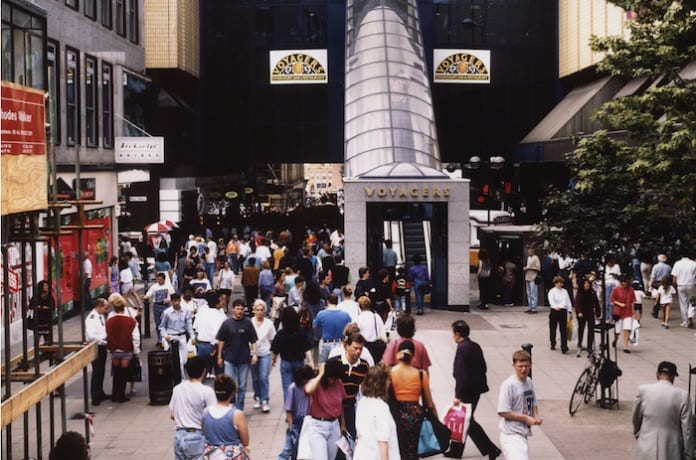 A project in the making for years, the Arndale Trust was formed in the 1950s, but it wasn’t until the late 70s that the centre was fully unveiled.

Boasting 210 shops and 200 market stalls, it was a big deal for Manchester and was officially opened by HRH Princess Anne on May 31st 1979.

Now as it approaches its 40th birthday, shoppers have been sharing nostalgic comments on social media, reflecting fondly on how it has changed over the past four decades.

And they’re not the only ones getting sentimental.

Award-winning local poet Mike Garry has written a new poem dedicated to Mancunians’ fond memories of it, drawing on his own memories as well as others.

In it, he celebrates the changing face of the shopping centre and the surrounding city centre over the years, as well as much-loved stores such as Stolen from Ivor, Rowntrees Café and the Warner Bros store.

“The Arndale was an important place for me growing up in Manchester,” he told us.

“It was the closest thing to an American mall we had. It was glamour for the kids of Manchester, from Moss Side to Fallowfield, and Moston to Miles Platting. You’d socialise there with your mates, pass the time with a pasty and check out the latest knits.”

“I worked at Stolen from Ivor selling burgundy jeans but it wasn’t like going to work, it was like hanging with your mates.”

To mark its 40th anniversary, Manchester Arndale is organising a birthday party with a difference from 31st May – 2nd June.

Over the weekend it will be installing a ‘birthday box’ in Exchange Court (outside Next on the lower level) which will give shoppers the chance to win presents from a range of stores including a diamond necklace from Beaverbrooks worth £550.

Fancy your luck? Pop down, press the big red buzzer, then wait for one of the 40 windows to open to discover what you’ve won.