Father Christmas has been on the phone – and he’s not very happy. Apparently, there have been some negative comments made about this year’s Christmas Markets. He’s asked us if there’s anything we can do to make sure the good people of Manchester know just how special the markets are, to both the city and its residents. We love Manchester, so we couldn’t really say no.

Arriving in the city in 1999, Manchester was the first city in the UK to host dedicated Christmas Markets. Since then they have developed rapidly and now attract over nine million visitors during their six week residency on the streets of Manchester city centre.

Whether you’re a lover of the Christmas Markets or you can’t stand them, there’s no doubt that they bring huge economic benefits to the city and its people.

In previous years, market traders have come from far and wide to sell their festive goods and we’ve welcomed them with open arms – after all we are one of the most metropolitan cities in the UK.

This year, there are over 300 traders offering beautifully crafted stalls of varying delights  on the city’s streets. And over 70% of those traders are from Greater Manchester and the north west – meaning that the millions of visitors flooding into the city from far and wide are purchasing goods direct from local businesses.

Local businesses like Porky Pig, whose Yorkshire Pudding wrap was a huge hit at last year’s Markets and who is back again this year in a prime location in Exchange Square outside the Arndale. Owner Eddie Osman has been so successful he opened Porky Pig’s Cafe on Cooper Street four months after the famous wrap debuted in Manchester. 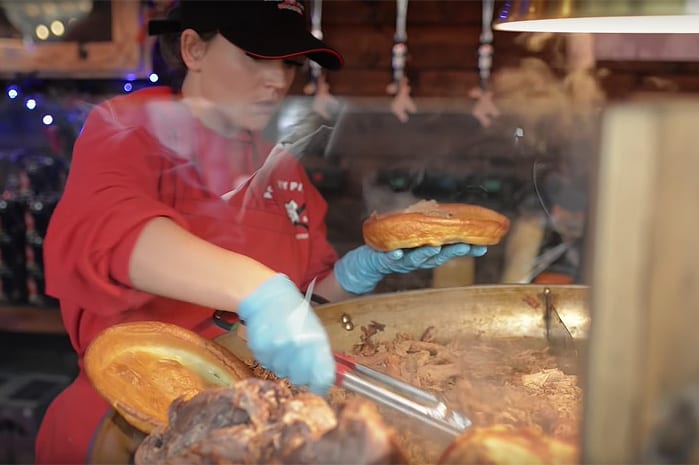 Another returning local business is Elsie May’s Cookie Dough. Elsie first launched the stall as a bar four years ago and introduced Hot Cookie Dough last year. It was so popular that this year Elsie May has two stalls at the markets – the original one on Exchange Square and a new one in Albert Square – serving cookie dough, brownies and her shimmering Rose Gold Prosecco.

And local grilled cheese company Northern Soul Grilled Cheese, who have a permanent market stall on the edge of the Northern Quarter, have proven massively popular, with queues as far as the eye can see. We know because we tried one today and it was delicious.

First time trader Prestwich-born Zara Cakes has teamed up with Home Sweet Home to put cupcakes at the top of the sweet tooth menu beneath the big Santa on Albert Square.

We got new cake homie!

We're super happy to announce our partnership with @ZaraCakes

Cakes, tray bakes and all your delicious treat needs every day! pic.twitter.com/Yn9qnhzL2v

And where do you think nine million visitors go when the markets close for the evening? Our guess is straight into Manchester’s bars, pubs, clubs, restaurants and hotels spending even more money – which is a pretty good thing in our opinion.

The Markets also do their bit for the environment, so visitors must pay a £3 deposit for mugs or £1 for glasses when they buy a gluhwein, coffee, beer, mulled wine – or any other festive beverage. Manchester City Council ensure all traders adhere to the mug and glass deposit scheme – a compulsory requirement for all stalls selling drinks for consumption on site. Give the mug back after your visit to get your deposit back – or keep the mug and have a Christmas souvenir.

From next year, Albert Square is going to be affected by renovations to the town hall. So that’s another reason for you to make the most of the Christmas Markets while you can.

They are on until Saturday December 22nd, with the main Albert Square hub open until Sunday December 23rd. Enjoy.