What’s on this Halloween in Manchester? Explore spooktacular events across the city and don’t forget to share your experience #HalloweenMCR #ILoveMCR

The Ivy
More events
Previous
Next

What's on in Manchester this Halloween?

Call it Americanised or commercialised, it doesn’t matter, Manchester loves Halloween more and more each year.

According to new research, Manchester is in the top five most haunted locations in the UK. The study identified the most haunted places in the UK by analysing a range of spooky factors, including the number of paranormal occurrences, spooky sightings, haunting manifestations and cryptozoology, as well as tales of UFOs, mythic legends, fairies, vampires and poltergeists.

Across the world, Halloween is celebrated every year on 31st October. But the origins of the spooky festival date back thousands of years.

The Pre-Christian Celtic year was determined by the changing seasons. The ancient festival of Samhain marked the end of summer and the harvest and the beginning of the colder, dark winter – and symbolised the boundary between the world of the living and the world of the dead.

As Christian teaching grew, All Hallows’ Day, also known as All Saints Day, became a time to remember those who had died for their beliefs. Sometime in the 8th century, Pope Gregory had the date of the All Hallows’ feast moved to 1st November, and the evening of Samhain became known as All-hallows-even, then Hallow Eve, then Hallowe’en and, of course, Halloween.

These days, there are plenty of spooktacular events to mark Halloween – and Manchester is no exception, with a weekend of ghoulishly good goings-on for adults and children alike.

Halloween in the City offers a massive monster party across the city’s streets. There’s a giant rooftop monster invasion, a monster parade, a mad scientist’s exploded castle and pop-up lab, fairground fun at the Carnival of Monsters, and a monstrous photo trail you can take part in across the city centre.

Or check out Scare City 2.0, a drive-in cinema with a difference. As well as a series of bone-chilling scary flicks including A Quiet Place, The Cabin In The Woods, Insidious and The Grudge alongside spooky hits for kids such as Coraline, Hocus Pocus and Coco, there are also live actors lurking in the shadows for some genuine jump scares. And don’t miss the Scare Zone, a brand-new experience filled with photo opportunities that you can walk through – if you dare.

One of the biggest Halloween events in Manchester, Dive Bar & Grill’s House of Pain Weekender, sees the venue transform into a Haunted House experience with theming, video DJs, dancers and bottle shows. Plus, for one weekend only, Dive NQ will be introducing a limited edition Halloween cocktail, a frighteningly fruity rum-based concoction they’ve named Red Devil.

And there’s plenty more to sink your teeth into, too, from make-up masterclasses and a Halloween-themed ice rink to Bongo’s Bingo Halloween Specials and even an immersive haunted house.

Trick or treat yourself to a weekend to remember. Even if it scares the life out of you.

News and stories about Halloween

Manchester makes the top five most haunted locations in the UK 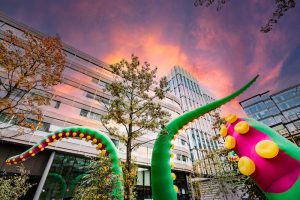 Giant rooftop monsters are returning to Manchester this Halloween