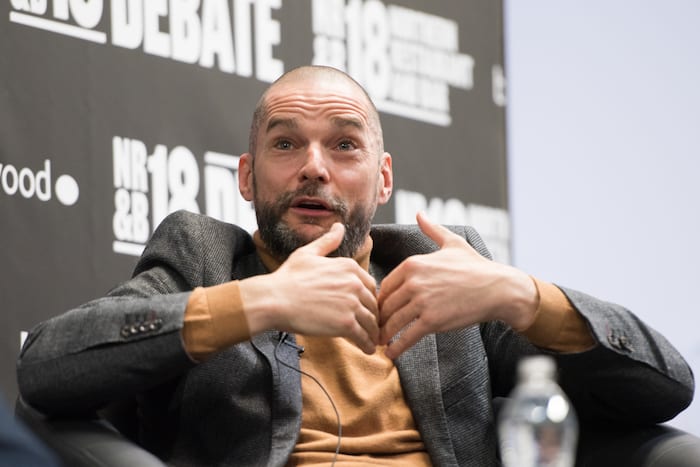 The world’s most famous maitre d’ and star of Channel 4’s First Dates, Fred Sirieix is the general manager at Galvin at Windows, a Michelin-starred French haute cuisine restaurant in London’s Park Lane.

His two decades in the restaurant trade have won him numerous awards, including Personality of the Year at the National Restaurant awards, and he’s also a keen amateur boxer who spars daily and who gives back to society with charity work.

Having recently filmed BBC2’s The Million Pound Menu in Spinningfields, Fred returned to the city this week as the headline speaker at NRB’s annual debate, discussing hospitality, the impact of technology, and how to deal with the issue of no-shows.

Fred cites his father, a doctor who worked in intensive care back home in France, as an early influence.

“My dad was always groomed very well,” he says. “I said to him when I was little, ‘why do you shave every day to go to work?’ And he said, ‘I shave because I need to look the part, I need to inspire confidence, and when I come into a room they need to know I’m going to make them feel better. It’s my job.”

Looking well-groomed is clearly important to Fred, who is always immaculately turned out and who aims to instil a sense of pride in his staff.

“It’s very important when you’re growing up to have that confidence instilled in you,” he says.

Fred is passionate about good customer service and is clear about what makes a good front of house team. He is “constantly looking for things,” which he describes as “a positive paranoia”.

A brilliant day @NRBManchester, thanks for the invite @ThomHetheringto . One of the highlights was meeting the legend that is @fredsirieix1 and listening to his approach to hospitality. pic.twitter.com/yaEw8dgb3S

“You want both technical knowledge and people skills in an equal mix,” he says. “I call it the what and the how. What you do is, for example, meet and greet. How is how you do it.”

Fred believes in the three S’s – See, Smile and Say Hello – but he is also aware of how difficult it is to find, and retain, skilled staff in an industry which is reported to need 700,000 extra staff by 2022.

In 2012 he launched National Waiters Day, a day designed to celebrate all front of house staff and inspire people about careers in the hospitality industry.

Fred is a keen user of social media, but believes that it has got to be a reflection of what you do as a restaurant.

“I had a lot of fun with social media,” says the early adopter of Twitter. “It was new and exciting and we were the first restaurant of that kind to get on social media.”

One of the ways social media is changing our perceptions of the industry is its ability to turn everyone into a critic.

“Everyone’s a critic now,” he says. “I’m a critic when I go to restaurants. Every single one of us has an opinion. The days where a food critic’s article could make or break a restaurant are long gone. Lots of social media photographs can have more of an impact.”

But technology also has its downsides, and there is currently much debate about how automated booking systems might be partly responsible for the current spate of no-shows blighting the industry, when people simply fail to turn up for reservations.

“We have a problem with no shows,” admits Fred. “Maybe 30 or 40 a night on a busy night, with 220 covers in the restaurant. We have a double confirmation policy, we call guests twice. But even then, sometimes people don’t turn up.”

Fred’s solution to the problem sounds simple, but it is one which has caused some worries amongst his team.

“What I’m going to do now is I’m just going to overbook,” he says.

“The problem with that is that I have to go against my team. They say ‘what if we book 270 and they all turn up?’ And I say, we deal with that.

“The world is not going to stop. We’re just going to have 20 people who will drink champagne in the bar while they wait. I think that’s the only way to do it.”

But despite advancing technology, Fred is adamant that front of house should be a human experience, and believes that the customer is always right, even if they can be difficult.

“You’ve got to enjoy it,” he says when asked what makes good customer service.

“You have to have enthusiasm. You need to look people in the eyes and have a connection, a rapport.”

The charming Frenchman is also enthusiastic about Manchester.

“It’s a fantastic city,” he says. “I really, really like the north.”