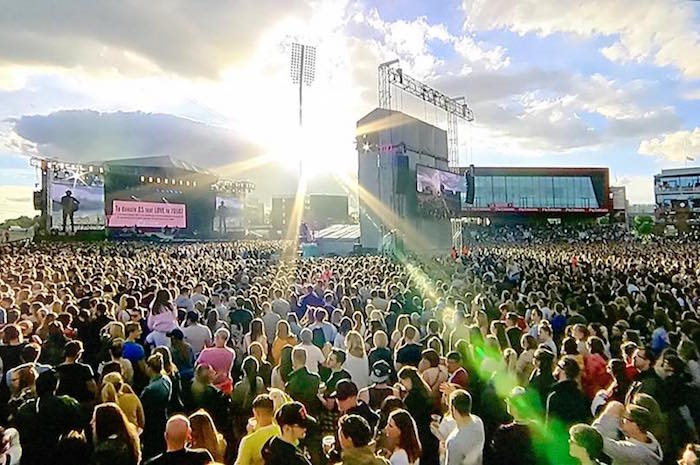 They say ‘the show must go on’ and it did, despite the London terrorist attack. 50,000 people were at the Emirates Old Trafford for the One Love Manchester concert with millions more watching all over the world.

It marked an emotional return for Ariana Grande to the city, just 13 days after the Arena terror attack which killed 22 innocent people and injured many more.

The concert showed the spirit of a city that will not be silenced, with the huge audience singing along to some of the biggest names in music, many of whom could have sold out the stadium performing on their own.

It was a night of high emotion, full of joy and sadness, laughter and tears.

It wasn’t confined to inside the stadium. The trams were full of people singing Don’t Look Back in Anger. Policemen played ring o’ roses with children.

The policemen at #OneLoveManchester have their dancing shoes on pic.twitter.com/OkTqMB7nEr

Marcus Mumford played a poignant You Are Not Alone In This on acoustic guitar, whilst Take That’s Let It Shine had many of the audience in tears. This was followed by Robbie Williams performing an acapella version of Strong with the chorus changed to “Manchester, we’re strong, we’re strong / We’re still singing our songs, our songs, our songs.”

“I don’t see, hear or smell any fear here this evening. All I feel is love and positivity,” said Pharrell Williams. Instead there was a show of solidarity as people danced along to Get Lucky followed by a duet with Miley Cyrus on Happy.

There was a performance from One Direction’s Niall Horan before Ariana Grande took to the stage – just hours after visiting young victims of the bomb attack in hospital. It was Grande’s decision to offer free tickets for One Love to all who had attended her original 22nd May gig.

She played all her hits on the orders of the mother of 15-year old Olivia Campbell, who died in the Arena attack.

She said: “She told me Olivia would have wanted to hear the hits. We had a totally different show planned and we had a rehearsal yesterday and we changed everything.”

One of the most memorable and emotional moments of the night was when Ariana joined the children of Parr’s Wood High School Choir for a monumental version of My Everything, clutching the shoulders of Natasha Seth, a 12-year old schoolgirl almost overcome with the emotion.

Katy Perry and Justin Beiber took to the stage sparking mass singalongs. Katy told members of the audience to reach out, touch the person next to them, look in their eyes and say ‘I love you’. And people did. It was that kind of evening.

Coldplay’s decision to play Don’t Look Back In Anger had the audience with their arms in the air, followed by their version of James’ Manchester anthem Sit Down – complete with the actions.

In a video message, honorary Mancunian David Beckham said: “Manchester is a place that was my home for many years. The people are some of the most special I have ever met in my life. It is somewhere that means so much to me. As a father, what happened made me truly sad and it is a day we will not ever forget. I am proud of everyone there today – everyone in the crowd and all the artists. Tonight is about remembering those who suffered so much on that night, but also celebrating the spirit of this great city. It’s a place we all love.”

And finally, Liam Gallagher turned up wearing an orange coat looking like he’d been Tango’d. The coat sold out. Unlike Liam.

Nothing says 'fuck you, ISIS' quite like a snarling Manc with an orange cagoule and maracas. #OneLoveManchester

There was no long-awaited Oasis reunion. Liam performed a high-energy Rock ‘n’ Roll Star and an emotional Live Forever against an I Love Manchester backdrop with a beating heart, accompanied by Chris Martin playing the part of Noel.

The concert ended with most of the performers joining Ariana on stage for a moving rendition of One Last Time – the song which will be re-released as a benefit track on iTunes – followed by Over The Rainbow, a song she has performed since the age of 14.

What an incredible concert ❤️

The #OneLoveManchester crowd join together as @ArianaGrande sings the poignant 'One Last Time' pic.twitter.com/qI2KmriLkE

One Love Manchester was a stunning display of music, might and true Manchester spirit. The only thing that wasn’t very Manchester about it was that it didn’t chuck it down.

“Everyone at Lancashire County Cricket Club and Emirates Old Trafford was proud to support the Manchester Emergency Fund through helping to put on an incredible show that was broadcast live to 50 countries,” said Emirates Old Trafford chief executive Daniel Gidney. “It was incredible to see some of the biggest names in music coming together at the venue to show their solidarity, not only for the people of Manchester, but those affected by this weekend’s atrocities in London too.”

Thanks to Ariana’s All-Stars, £2.35m was raised for the victims of the Arena bombing, taking the Emergency Fund grand total (or should that be Grande total) to more than £10m.

The spotlight has moved to London now.  Another day. Another city. Another terrorist attack. More innocent people killed.