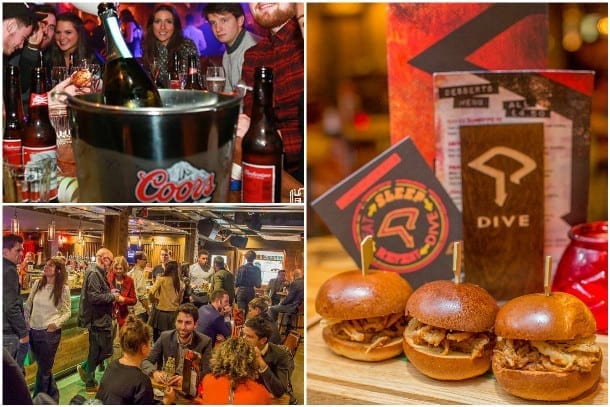 Dive has only been open since the end of November but it’s already getting into the swing of showing all the big sporting events. With BT & Sky Sports packages, this venue offers bites & liquor alongside all the big games.

Open from midday and closing late during the week and not till an impressive 5am at weekends, Dive is definitely on the ball when it comes to watching football, boxing, darts and Super Bowl..

Once you’re in there’s no need to move. This month they’ve got a special January offer of 55% off ALL food, including desserts –  the perfect excuse to go and watch the games, stay longer and party until 5am!

All sports playing midweek are an opportunity to snap up their drinks deals which are available from 5pm till 8pm. From cocktails to beers, wines and draughts, and with prices starting from £2.50, this is an offer you can’t refuse.

Here’s just a few of the biggest events playing at Dive over the next few weeks.

On Saturday 16th January, David Haye’s comeback fight against Mark De Mori will be on in the main area from 9pm and there are 300 free tickets up for grabs here >>

On Sunday 7, February, there’s another must see event-Super Bowl 50, the biggest NFL game of the year,will decide the champions for the 2015 season. Kick off is 11.30pm GMT.

And there’s a full line-up of games showing on BT and Sky in the next few weeks including Liverpool v United on Sunday, 17th January and West Ham v City on Saturday, 23rd January.

So why not watch all the big sports events right in the heart of the NQ. You can even hire a booth or private snug space.