It all started on Oxford Road: the band from Manchester conquering the post-pop landscape 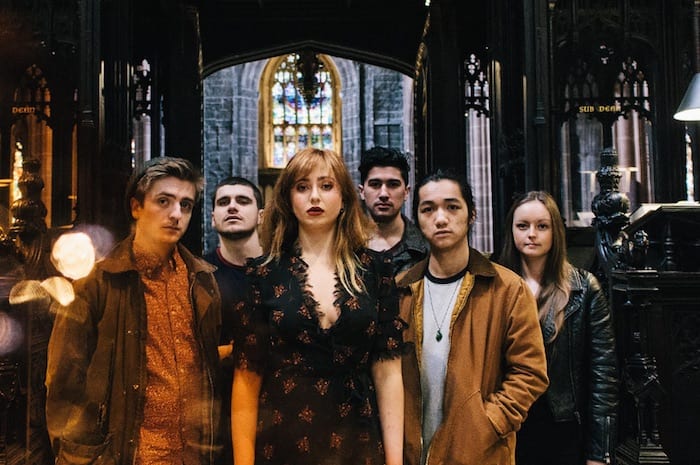 Meet Young Monarch, a group of young musicians from across the country who met whilst studying at The Royal Northern College of Music.

They already have a headline tour under their belts and are due to make another release this October.

Unlike so many bands out there, this one attracts attention due to their unique sound and eclectic instrumentation. Classical instruments combine with stand-out music to create a sound which breaks barriers. They’ve played with orchestras and in some atmospheric venues – including churches – and created music which stands out.

It’s beyond pop, not quite alt-rock and incorporates ambient elements too. Ultimately, it’s music that needs to be listened to.

We spoke to Rebecca Lewis about the band.

How did the group come together and how does being in a band compare to your solo work?

We all met at the RNCM four years ago when we started the Popular Music Performance BMus degree. I think we all knew that we were passionate about pursuing original music in some way when we began.

I’ve written songs since about eight years old so knew I wanted to start a band. I made a group chat with a few of my closest friends and asked if they wanted to jam. The jam turned out pretty well I guess because here we are three and a half years later. I think being in a band is such an amazingly fulfilling experience as you get to share all the great moments with your best friends. I think we all love doing our own individual stuff as it’s a great outlet for us to expand as musicians, but there’s a feeling you get from creating something together that you don’t get when you write by yourself. I think we all enjoy it so much because there’s little bits of each of our personalities woven into the music and in each live performance.

Do you think Manchester has served as a catalyst for your music?

Definitely. If not the place itself with all its rich musical history, we’ve all been hugely inspired by the people. We’ve all been lucky enough to meet so many incredibly talented people through studying at the RNCM and gigging that inspire us all the time, be that tutors, friends or our peers. There’s such an amazing sense of community in the music scene here that you want to learn from everyone you meet. It pushes you to work harder and be better. I also think access to so much live music has inspired our sound and live performance in so many ways.

Why the name Young Monarch?

I wish there was a better story to this. Maybe we should make one up. Basically Matt (the drummer) really loved the name Monarchy of Venice but we thought it was a tad too long, so we changed it to Monarch. But then we didn’t want to be referred to as an airline – and how glad we are to have steered away from that now! So we thought Young Monarch had a nice ring to it. We often joke that we’ll reform when we’re about 80 and rename ourselves  Old Peasants!

Have you encountered difficulties in the Manchester music scene?

I don’t think being a musician or being in a band will ever come without its difficulties, otherwise everyone would be in a successful band. But the good definitely outweighs the bad. We’re super lucky to have people around us that really believe in what we’re doing, to push us forward when we do run into those challenges. We’re all still learning, so we’ve made mistakes and will continue to I’m sure. But it’s those mistakes that have pushed us forward to do more.

How have you overcome creative differences?

What can we expect from Young Monarch in the upcoming months?

We’ve been working on new material and recording with Lael Goldberg, our fabulous new producer, to create some amazing new tracks. I think this is definitely the best stuff we’ve produced so far and we can’t wait to show the world what we’ve been working on. Currently we have a release date for our next single Strangers in early October and we’ll be doing some live dates around this plus some more festivals in September.

What would you say to other people hoping to form a band?

Do it! It’s challenging. There will be tears, lack of sleep and many hours sat in uncomfortably warm practice rooms, but it is all so worth it. We have an incredible ability as musicians to touch people’s lives with the music we make and hearing that you’ve made someone cry or laugh or dance is the most amazing feeling in the world. You will never regret giving it a try.

What has been your biggest achievement so far?

That’s a tricky one. I think so many amazing things have happened in the past year, but top of my list would probably have to be our performance at the Royal Albert Hall or our support slot at the Liverpool Philharmonic Hall for Tokio Myers. We walked away from both performance with this incredibly euphoric feeling. I think moments like that definitely make us hungry for more and we feel as if we’re just getting started. The best is yet to come.