Manchester’s bohemian Northern Quarter was absolutely starved of classic eateries before the arrival of this simply titled restaurant. What it apparently lacks in naming invention is more than made up for in the imagination of the cooking.

Upon first impression, we quickly award TNQ Restaurant a Perfect Getaway from the funky crowd that infiltrate Thomas Street. In a small and intimate setting, this chic boutique-style eatery feels like a modern Parisian restaurant. While the cutlery would do the fairy liquid adverts proud, the décor is humble, modest and proud of its Mancunian heritage. 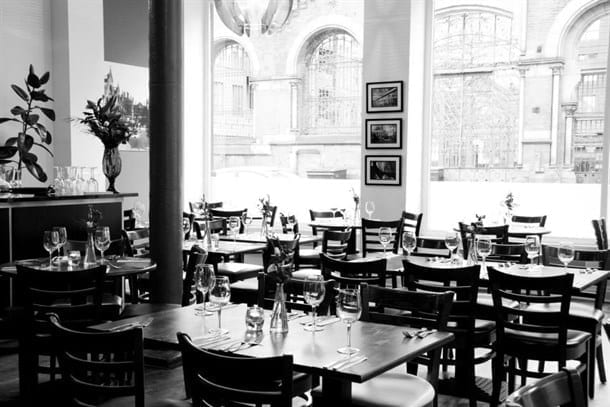 This nine-year-old establishment is perfectly situated for townies out for a gig or comedy night. Along with weekly promotions and special offers, TNQ Restaurant attracts a varied crowd.

The menu here is as creative as the Northern Quarter itself. Head Chef Anthony Fielden, along with restaurant manager Jessica Fergusson, have put together a menu which rivals other restaurants in the area on creativity alone. Using quirky combinations, they still manage to capture the traditional in their dishes. Everything but the olives are locally sourced ingredients and all are complimented by a unique selection of wines.

Greeted with a glass of bubbly each, we had a good natter with Jessica – her Irish charm making us feel very welcome. Ordering olives however, we found them to be rather strange – the seeds were huge and lacked flavour. Nevertheless, we were intrigued to receive our starters.

Opting for the Carpaccio of Cheshire beef fillet with rocket, black truffle and parmesan crisp, we were impressed by its coolness and delicacy as well as the pleasant contrast of texture between the finely sliced beef and crispy parmesan. We washed this down with a new Sicilian red wine on the menu ‘LegatoNero De’Alcala’, which we were told by Jessica is Italian for ‘to prolong’ (“or something like that.”) Whatever it means (after a quick Google, we’re still none the wiser), it was ideal in taste and depth.

The mussels we ordered next were cooked to perfection and the fabulous waiting staff Sophia and Steve brought our tasty fresh starters over with a smile. Our taste-buds tingling, we were certainly in the mood for our mains.

We went for the ‘favourite’ suckling pig, which can only be described as juicy sweet. It came with root vegetable dauphinoise, buttered savoy cabbage and Bury black pudding jus – a proper local, northern combination that’s been tried and tested to work extremely well. Ginger must have enjoyed it as he almost licked the plate clean, and probably would have done if I hadn’t physically shaken him.

The Shetland organic salmon with saffron fondant potato, wilted greens and Brixham brown crab beurre blanc was so fresh and light, but still a good-sized meal that would fill most people. I was satisfied but not unable to ahem…dance.

Between (ok-and during) each course we enjoyed the wine and Prosecco glass after glass (we blame Jess)…Our notes from the evening go from bad to worse, ending in incoherent scribbles: if nothing else, a sign of a good night.

Our desserts finished off the evening with even more traditional, home made wonder. We couldn’t decide what we wanted, so side-stepping sense, we simply ordered everything that we fancied. With a sticky toffee pudding, cheese cake and a torte with honeycomb before us, deciding who got what basically ended up in a fight. After a lot of fencing, mess and fork related injuries, we got a taste of them all. As expected they were delicious, no-nonsense and warming. Essential, considering it felt like minus 20 degrees outside.

TNQ Restaurant is old friend, born in your hometown that never gets old (and, like George Clooney, doesn’t seem to age).