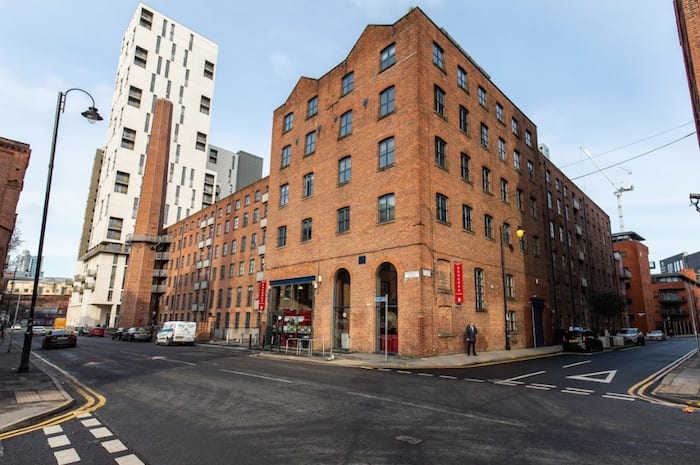 Given that Manchester was known for so long as the world’s leading city for the production of cotton goods, it is unfortunate that so few mills remain.

Gone is Richard Arkwright’s Shudehill Mill, opened in 1781 on Miller Street as the world’s first steam-driven textile mill. It stood where two monstrous funnels now stand in the Co-op’s Miller Street car park. The water came from the Shudehill streams beneath.

Gone also is Piccadilly Mill which Peter Drinkwater set up eight years later, and where the incomparable Robert Owen was briefly manager. The site is now marked by a 21st century office complex at the Piccadilly station end of Aytoun Street.

It was the first cotton mill in Manchester to be directly powered by a steam engine and the tenth such building in the world. It meant that a mill no longer needed to be placed alongside a fast flowing stretch of water. The machines had arrived.

Entrepreneurs beat a path to Manchester.

Adam and George Murray came down from Scotland to make textile machines and opened Murray’s Mills in Ancoats in 1798 – the oldest surviving mill buildings in Manchester. After years of neglect, they are now being converted for mixed use – leisure, retail and accommodation.

The Murrays were the first mill owners brave enough to withstand Luddite attacks on workplaces, using new machinery that surpassed in power the old-style waterwheel contraptions which had been driven by fast-flowing rivers.

As this new machinery could now be used in urban centres such as Manchester, the only water needed was that of a canal to bring the raw materials in and transport the goods away – in this case the Rochdale Canal (opened 1804), an arm of which linked the site to the waterway.

At the end of the 18th century, James McConnel and John Kennedy opened what are now known as Royal Mills, next to Murray’s Mills on Redhill Street in Ancoats.

Here, in 1797 – a year before the Murrays –  they installed the world’s first steam-powered cotton spinning mule and soon overtook nearby Murray’s as the biggest cotton-spinning firm in the area, employing 1,500 workers by 1835.

That year the French historian, Alexis de Tocqueville, visited the site and described the mills as “a place where some 1500 workers labour 69 hours a week, with an average wage of 11 shillings, and where three-quarters of the workers are women and children”.

A year later the firm was commended by the Factory Inspector for how they treated staff and for the “neat condition of the rooms, and the attention to cleanliness and ventilation”. When the bell rang at the beginning of a shift, workers had to stay for the day. Access in and out was tightly controlled. Anyone late was locked out and lost a day’s pay.

The two original mills no longer survive. The oldest existing section is Sedgwick Mill, the 18-bay 8-storey block on Redhill Street, just west of Murray Street. It was built between 1818 and 1824, probably designed by the leading engineer of the time, William Fairbairn, and is made of cast-iron beams and columns which support brick-vaulted ceilings.

Building work began in 1814 with money from the Birley family. Four years later, the mills were using gas lighting and cast iron columns and were, therefore, the most technologically advanced in Manchester.

In the 1820s, the Birleys went into partnership with the Glasgow merchant Charles Macintosh. He came up with the ingenious idea of lining cotton coats with waterproof chemicals, pioneering what soon became known as the macintosh or ‘mac’. Later came vulcanisation, a material that wasn’t affected by the weather and would snap back to its original shape if stretched.

Industrial relations, however, were fraught. The firm’s Hugh Hornby Birley became one of the most hated figures in Manchester after leading the Manchester and Salford Yeomanry in an attack on the people in August 1819 at what became known as the Peterloo massacre.

During an 1842 strike at the complex, managers barricaded the doors, turned hose-pipes on the crowd, and hurled stones and pieces of metal onto the crowd below, nearly killing a young woman.

It is worth recalling how intolerable conditions were in Manchester’s mills.

In The Manufacturing Population of England (1833), Peter Gaskell noted how “Any man who has stood at twelve o’clock at the single narrow door-way, which serves as the place of exit for the hands employed in the great cotton-mills, must acknowledge that an uglier set of men and women, of boys and girls, taking them in the mass, it would be impossible to congregate in a smaller compass. Their complexion is sallow and pallid–with a peculiar flatness of feature, caused by the want of a proper quantity of adipose substance to cushion out the cheeks”.

A report from July that year found that most factories were “dirty; low-roofed; ill-ventilated; ill-drained; no conveniences for washing or dressing; no contrivance for carrying off dust and other effluvia”.

The number of cotton mills in Manchester peaked at 108 in 1853. After this the mills moved to the suburbs. Inner Manchester changed from an industrial to a commercial centre with banks, company offices and warehouses, trade centring on the Royal Exchange from which 280 cotton towns and villages radiated out within a dozen miles.

Or, as the political scientist Alexis De Tocqueville put it in the 1830s, “From Manchester the greatest stream of human industry flows out to fertilise the whole world. From this filthy sewer pure gold flows.”