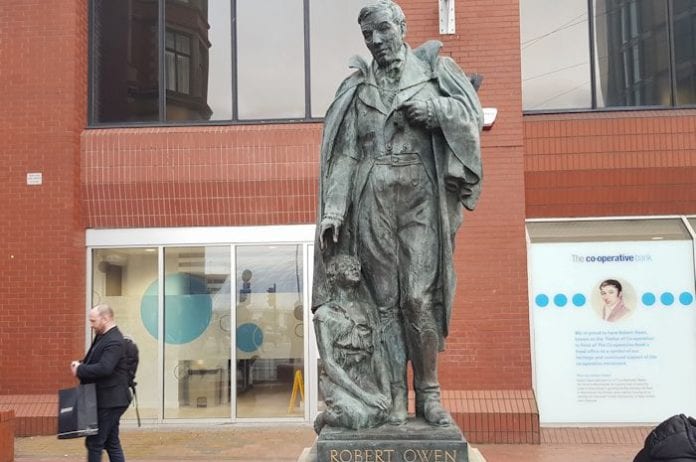 The long-awaited return of the Robert Owen statue to Corporation Street is the perfect opportunity to remind Manchester about the extraordinary deeds and words of one of the greatest Britons who ever lived.

Robert Owen is the founding father of the co-operative movement, which is why his statue can be found outside the Co-operative Bank on Corporation Street.

At the end of the 18th century, Owen devised a new political philosophy – co-operation. This was the notion that if management and workers co-operated with each other, rather than fought each other, business and industrial relations would thrive, as would the workers’ lives.

Owen has also often been described as the father of English socialism, one of the first well-known figures to be described as a socialist.

George Holyoake, the Co-op’s leading historian, wrote in 1892: “Just as Thomas Paine was the founder of political ideas among the people of England, Robert Owen was also the founder of social ideas among them. His passion was the organisation of labour, and to cover the land with self-supporting cities of industry, in which well-devised material condition should render ethical life possible.” 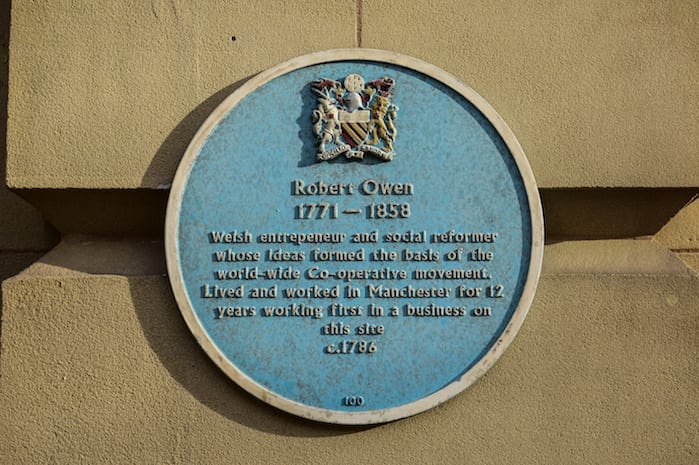 Owen was born in Wales in 1771. He moved to Manchester to work and became a draper’s assistant for Satterfield’s in St Ann’s Square in 1789. On the wall of the Royal Exchange, the site close to where he worked, there is a plaque. At Satterfield’s he discovered the existence of a “new and curious machine for spinning cotton”.

This encouraged Owen to go into the cotton business and he became the manager of various mills in the city centre: Piccadilly Mill (where the trams cross Auburn Street near Piccadilly station) and the Chorlton Twist Company (the Dancehouse Theatre on Oxford Road occupies the site).

Owen put his ideas into practice at his model villages, beginning with New Lanark in Scotland in 1799. There he raised wages, shortened hours, improved housing and social conditions, and even refused to employ very young children, unlike other mill owners, opening schools for them instead. He set up a co-operative shop which sold quality goods at a reasonable cost.

He believed that in his “villages of co-operation” the lack of competition and capitalism would lead to a classless society. In these ventures workers tried to raise their income by growing their own food, making their own clothes and become self-governing, but the results were not wholly successful, and it was the later co-operative societies, particularly the one famously founded in Rochdale in 1833, that made the co-operative cause a success.

He advocated sexual equality, marriage and divorce law reform and cited birth control as a means of regulating population. Although he supported religious tolerance, his antagonism towards organised religion made him many enemies. For instance in 1823 he suggested to his school teachers that the pupils would learn more from geography than the Bible. He deemed the Scottish Sabbath a day of “superstitious gloom and tyranny over the mind [and] the most destructive intemperance and licentiousness.”

This didn’t go down too well in Presbyterian Scotland. The reforms Owen suggested for working hours and conditions were considered too advanced at the time, but he was the main driving force behind the Factory Acts which reduced hours to a more tolerable level. One of Owen’s mantras ran “Eight hours work, eight hours recreation, eight hours sleep” at a time when mill hands were labouring some twelve hours a day. How progressive that sounds today.