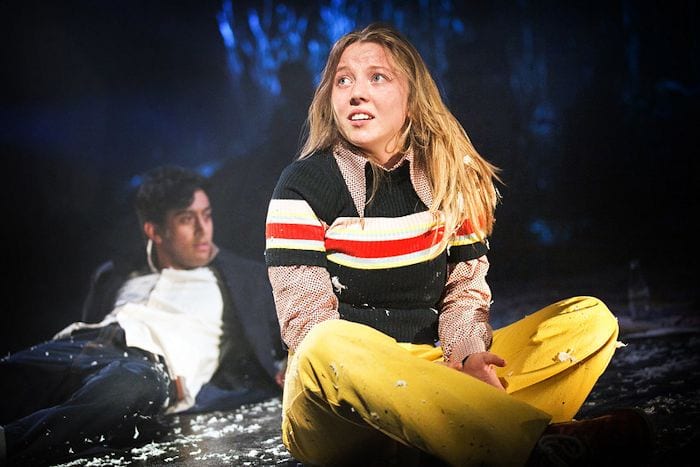 Alice Sebold’s best selling novel The Lovely Bones is written from the perspective of protagonist Susie Salmon (played here by Charlotte Beaumont) who takes the reader through her life, the highs and lows.

Susie is dead and we see her watching her life carrying on after her brutal murder. This isn’t a spoiler: you find this out within the first five minutes.

The book had a poetic quality to it. Even though many of the themes are dark, there is something uplifting at play here too. The family must deal with the fact that people treat them differently and the words ‘Sorry for your loss’ are repeated. Susie’s sister Lindsay replies ‘What have I lost?’

Bryony Lavery’s adaptation explores grief in all its ugliness and unpredictable nature: the way that you feel fine and then it hits you like a tsunami.

Melly Still directs with an eye on fans of the book, but also adds original touches and flourishes which far outshine Peter Jackson’s muddled film version which resembled one long advert for Ready Brek, complete with glowing heavenly creatures.

Charlotte Beaumont is the heart and soul of the piece. Whether she is dancing like no-one’s watching, listening to the beautiful sounds of David Bowie, or realising that her first kiss is her last, there is something childlike about her Susie.

Catrin Aaron plays Susie’s mom, Abigail, a tough role to play. She is trapped in her own grief which leads to unpredictable behaviour, as she longs to be more than what she has become. But Aaron explores how grief can sometimes awaken something in you, instead of making you simply stop living.

Jack Sandle, who plays Susie’s father Jack, is great at portraying the paralysis of loss. Nicholas Khan brings more to the role of the mysterious Mr Harvey than an edge of creepiness. He has a tortured look on his face throughout. Leigh Lothian steals many scenes as dour friend Ruth and lost boy Buckley who feels abandoned by everyone following his sister’s death.

Lastly Lynda Rooke makes quite an entrance as Grandma Lyn, the honest talking woman who always has a drink and cigarette in hand, before she imparts her words of wisdom. Rooke is great at the comedy and the pathos.

Ana Inés Jabares-Pita’s set design is so dazzling it’s hard to know where to look. Grief takes such a hold on you that you cannot recognise yourself in a mirror. This set is reflective and shows you two sides to everything that takes place.

Dave Price’s music also brings you into the narrative, as there is something fragile about it, whatever the song. At times Matt Haskins lighting design is slightly overdone, particularly at the beginning and following the interval, so instead of being shocking it is irritating as it takes your eyes a while to adjust.

There is also so much narrative to pack into this production, that the pace is either breathy and hurtling towards a conclusion or pausing for too much reflection. Some middle ground would give the audience something far more palatable.

Having said that, this production of The Lovely Bones remains haunting, funny and heartfelt and contains one of the most realistic depictions of bereavement I have seen in a long time.

Dreamlike, hypnotic at times and always watchable, and if you are a fan of the book, you will be in heaven for over two hours.

The Lovely Bones is at The Lowry until 19th October.