The Circle: what really happens behind the scenes of the hit TV show filmed in Salford?

Producers might be keen to keep the exact location of Channel 4’s show The Circle under wraps for security reasons, but there’s no missing where it’s being filmed in Salford.

There’s literally a neon sign in the shape of a circle that stretches the across the side of an apartment block and shines bright into the night’s sky.

Salford is the new home for the series following its debut in London last year. It’s not only the location that’s changed, as hosting duties have also been handed over from Maya Jama and Alice Levine to former Big Brother host Emma Willis, although the show’s premise remains the same.

In short, it’s a popularity contest, only the contestants live in separate flats and they never meet one other. Instead, they communicate via the voice activated social media platform called The Circle, which means they can choose to be themselves, or ‘catfish’ and be whoever they want to be.

It’s why there’s currently a 26-year-old recruitment consultant called James pretending to be single mum ‘Sammie’, and TV presenter Richard Madeley, 62, could fake it as Judy, a glamorous 27-year-old, during his temporary appearance on the show.

The aim is to avoid being blocked as the least popular contestant and stay in for a chance of winning the £100k prize. It’s like Big Brother for the social media age and makes for fascinating viewing.

“I know there’s this suggestion it’s just a replacement for Big Brother for me, but I view it quite differently,” says Emma Willis, 43, who’s based in the south and pops up to Manchester for the live shows.

“I always viewed Big Brother with the purist mentality, it was a social experiment. But this, I very much watch it as a game with the interaction of people, how they’ll react in certain scenarios and then seeing who’s going to be themselves and who’s going to play it to try and be the most popular and win that money.”

The mum-of-three believes she has “quite a healthy relationship” with social media.

“I can see how it can be addictive, but I also like to keep it at an arm’s length. I’m always conscious of being realistic on it and painting a true picture of my life, rather than a version of you. I think that’s the responsibility we should all be taking.”

And if she was taking part in the show? “I wouldn’t trust anyone. I’m too paranoid”.

It’s two hours before the show goes live to the nation when I reach the production base on the University of Salford’s campus. There’s security on the gates, and lots of people with clipboards buzzing about and talking into headsets.

I’m led into a building, which wasn’t being utilised when Channel 4 moved in. The endless concrete corridors, glass rooms and unforgiving overhead lighting is reminiscent of those abandoned buildings you see in horror movies where unfortunate victims are chased by the undead. 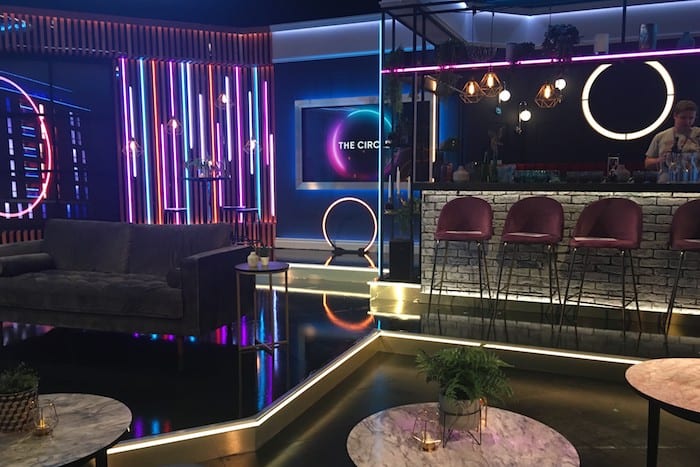 The stark nature of place didn’t bypass Bolton’s Sophie Willan, The Circle’s voiceover queen. It’s why she introduced a few soft furnishings to the room she shares with writer Lee Gant. He’d been working by himself for a month before her arrival.

“I had one desk and then she came in like Liza Minnelli,” says Lee.

“He did snigger, but I’ve set him up here with a reading area and he loves it,” notes Sophie. They’re in each other’s pockets throughout filming, although Lee’s the first to arrive in the morning.

“Obviously, they’re filming constantly, and edits are happening overnight, so when I get in, they’ll have a rough show laid-out in rough parts. I watch it and write voiceovers,” explains Lee.

“There are two lines, one being information you must get over to the audience in a slick, funny way, and then the other are the drop-in lines, so reacting to things and sarcasm. Then Sophie will come in and we’ll watch it together and Sophie will change lines and add to them.”

“I might just come up with something when I’m in the booth, but I’m the one with the quips. I don’t really feed into the narrative. And then the execs check it,” says Sophie.

“There is a lot of sitting around, which can get a bit boring, but then that’s why I’ve had so much time to Feng shui.”

As I leave their room, I almost bump into the recently ‘blocked’ contestant Emelle Smith from Manchester who, blindfolded and wearing headphones, is being led into a holding area before the show begins. It’s so there’s no chance of her seeing anything she shouldn’t before the cameras are there to capture her reaction.

The lockdown is clearly taken very seriously in these parts.

“Emelle went in on Saturday morning, and she didn’t have her phone from then,” says Sophie, Emelle’s younger sister, as we chat in a makeshift bar upstairs.

“She would’ve been so entertaining to watch, which is a bit frustrating, but we were more excited than nervous for her.”

“She was being herself, and that’s rewarding. I was so proud of her,” adds Nicola, Emelle’s mum.

“She’s proper switched on, she’s smart and had almost uncovered James. You’ve got to give it to him, he has put a lot of effort and commitment into winning the 100 grand.”

Shortly after, we’re herded downstairs and into a marquee next door where the studio set is. The aim is to create a ‘Friday night out feel’, which goes someway to explain the unidentified liquid that’s handed out in flutes as everyone takes their seats at tables and on bar stools.

A voice from the heavens orders us to, ‘Put your phones down, boys and girls’, before the warm-up guy appears. He’s given the task getting everyone to look lively for the cameras by forcing people on their feet to do Gangnam Style and a rendition of Frankie Valli’s Can’t Take My Eyes Off You.

There are instructions on when, and how loud, to clap, to ‘ooh’ and ‘aah’ at the appropriate times and show support for guests Scarlett Moffatt and Courtney Act in a short rehearsal. With a final reminder to look happy, the countdown begins, and the show goes live.

Over the next hour-and-a-half, we watch Madeley twerk, the oldest contestant Tim, demonstrate Morris Dancing with a vigorous “whoopsie daisy” and one of the youngest, Georgina, open up about her Crohn’s Disease.

Somerset farmer Sy’s evicted and Ella enters the game, as the studio gets increasingly warm, and then it’s suddenly all over and we’re ejected into Salford’s chilly air.

The Circle continues on Channel 4 at 10pm.