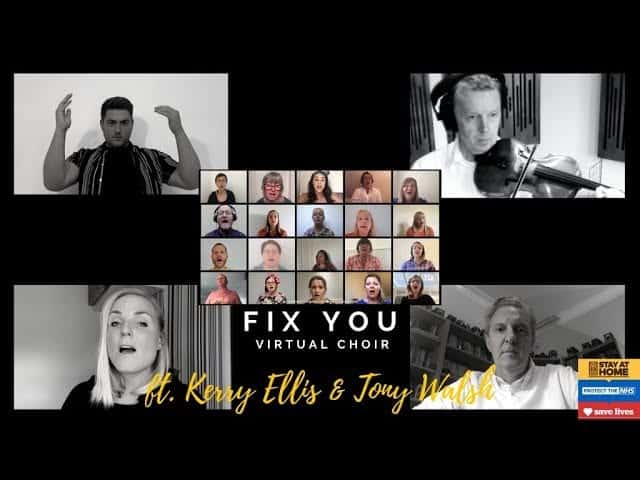 Over 100 powerful voices from across Greater Manchester have come together in a virtual choir to sing Coldplay’s Fix You in honour of those lives lost on the front line during the global Covid 19 pandemic.

The virtual choir is made up of singers from The Choir Project Community Choir and The Royal Northern College of Music and Deloitte staff choirs,  with guest soloist Kerry Ellis and a reading by poet Tony Walsh.

Over 100 people were involved in the performance, with everyone recording their parts individually at home.

This cover is the brainchild of Manchester musician, Daniel McDwyer, a graduate of the Royal Northern College of Music and an established vocal coach, conductor and arranger.

“It’s such a strange time for us all, it’s absolutely heartbreaking to think people are risking their lives every day to help us, and devastating to hear about the NHS and health workers who have lost to Covid-19,” said Daniel, who currently holds the position of musical director of several other choirs including Bee Vocal – The Manchester Mental Health Choir, Manchester Lesbian and Gay Chorus and Northenden Community Choir.

Following the terror attack on Manchester Arena in 2017, Dan was asked by Manchester city council to be musical director for Manchester Together – With One Voice and helped produce and arrange all music for the event, which was broadcast nationally, bringing together a mass choir of 4,000 singers from over 100 choirs.

Kerry Ellis has become recognised as the leading lady of West End musicals from her starring roles in London and on Broadway. She has also achieved chart-topping success as a recording artist signed to Universal Decca with her debut album Anthems. She landed the role of Meat in the original London cast of We Will Rock You and has subsequently played lead roles in West End musicals Les Miserables, Wicked, Oliver and Cats.

Kerry has also appeared in national tours and concert productions of musicals like Miss Saigon, Chess, The War of the Worlds and Rent. Dan first worked with Kerry in a collaboration with Manchester United Foundation Youth Choir at Old Trafford where they performed her rendition of Anthem.

Tony Walsh has become one of the UK’s most widely recognised and most in-demand professional poets. His work came to worldwide attention in May 2017 with a performance broadcast globally from the vigil for victims of the Arena bomb outrage.

This iconic performance, together with Tony’s spontaneous closing comment of “choose love, Manchester” was widely credited with helping to define the city’s notably defiant, compassionate and creative response to these terrible events.

With subsequent acclaimed performances alongside rock and pop superstars at the One Love fundraising concert and the re-opening of Manchester Arena, Tony – also known as Longfella –  was catapulted on to rock festival mainstages and clocked up 3 million views on Facebook for his next poem.

The One Love concert was broadcast and streamed to a global audience of many millions and reached over 15 million people on YouTube afterwards. It was at this concert that Dan first met Tony having both been invited to perform.

“Everyone just wants to help in whatever way they can and a project like this can only happen with the help of a lot of people, from the arrangers to each individual in the choir who has contributed,” said Daniel. “On behalf of everyone involved, thank you so much to those on the frontline, risking their life every day, and to those who we have lost, this is for you, you will never be forgotten.”