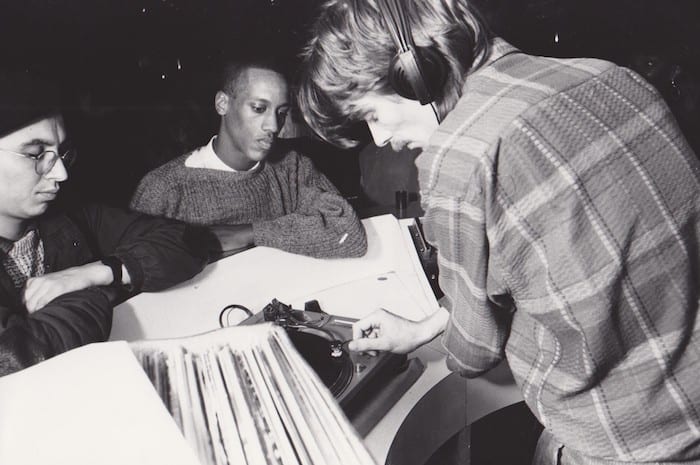 The story of Manchester music in the 1980s is dominated by Factory Records and the Hacienda. It’s a compelling narrative that starts with the wonders of Joy Division and Ian’s sad death, is followed by his bandmates reconvening as New Order and the Hacienda nightclub, and ends with the acid house revolution.

In its early publicity, the Hacienda described itself as a ‘videotech’. In addition to cutting edge live music, video cut-ups were shown on two big video screens and occasional film nights were programmed. It was a world away from the sticky carpet and chart music mainstream clubs of the time.

The Hacienda’s inspiration is always said to be Danceteria in New York but it also had an antecedent closer to home, albeit a much smaller enterprise. In 1980, the Beach Club in Shudehill, as well as hosting gigs by the likes of Biting Tongues and the Passage, showed arty films. The Factory crowd were regulars at the Beach Club. Lindsay Wilson (Tony’s  wife) was one of the organisers and the first New Order show was at the Beach Club.

Although it was obvious the Hacienda had almost nothing in common with regular clubs like Rotters and Discotheque Royale, it remained plugged into an eco-system of small, non-mainstream nights in other clubs like Berlin, the PSV, Devilles, the Venue, and Konspiracy.

There were a number of places that presented great live music in the 1980s including the International, the Boardwalk, and the Academy venues at the University of Manchester Students Union. The history of the Union’s gigs are collected in a new online exhibition curated by Manchester District Music Archive. It’s one of a number of new initiatives celebrating Manchester nights out in the 1980s.

Mark Rae is launching his Northern Sulphuric Soulboy book and album on December 9 at the Carlton Club in Whalley Range. In his book, Mark documents the goings on when he DJ’d at Feva at the Man Alive, and nights at Precinct 13 and elsewhere, playing funk, hip hop and street soul, and celebrates other aspects of the 80s scene in Manchester like Stu Allan’s ‘Buss Diss’ radio show and the Spin Inn record shop.

The Reno in Moss Side was on Princess Rd near the corner of Moss Lane East and stayed open until dawn. Playwright and former Reno regular Linda Brogan has launched a website about the venue.

I went to the Reno five or six times in the mid-1980s when I lived on Great Western Street. By 4am the mix of people was unique. Young black guys off the streets, girls with beautiful hair, great dancers, drunk dancers, older folk including older Irish women and, inevitably, domino players. There were white people there but we were a small minority. The music was amazing, from James Brown to electro. I’m talking 1984, around the time of the release of the song by Whodini called Freaks Come Out At Night.  I’ll never hear that song and not remember those nights.

That’s how it works isn’t it? Songs trigger a memory, take you back to your younger days, full of energy and hungry for excitement. Your weekly visit to one or two venues where you found your tribe, your music, your fashions, your life. They were the highlights of your existence.

I mention the Reno in my latest book Life After Dark which is a two hundred year history of nightclubs and music venues, making a case for their value in music history, working class culture, the story of our cities, and in our personal lives.

Many Manchester clubs of the 1980s like Rotters, Manhattan Sound, and the Thunderdome have long gone. Some are still around under a different name like the Playpen (became 42nd Street) and Legend (became 5th Avenue). I half remember great nights out at the Boardwalk, the Cyprus Tavern, the Gallery.

Everyone will have their own favourites. Personal memories don’t always coincide. I’ve heard people say the Reno was grim and dodgy. It’s true that the police wouldn’t go near the place, even undercover, but that wasn’t particularly a problem. The place was peaceful. It policed itself. But once the use of guns became prevalent – around 1988 – that changed everything.

Historians, music fans, critics, can write the narratives, challenge the mythologies and debate the cultural significance of various clubs, but the emotional connections  ex-customers feel with the venues they found and loved the most are personal and undeniable. As I say in Life After Dark, “the best club in the world is the one that changed your life.”